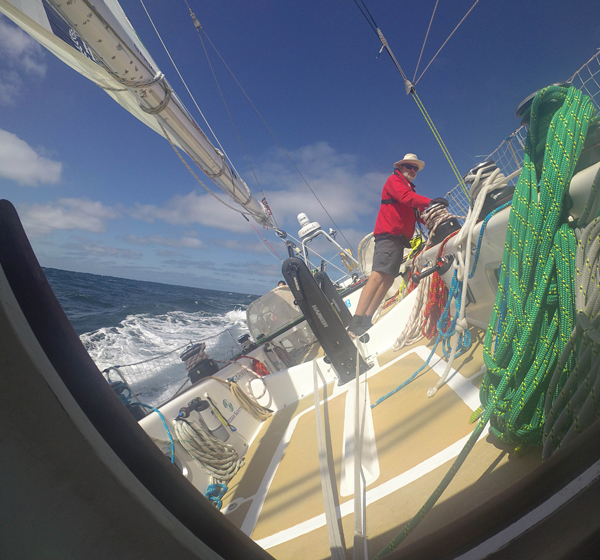 The fans and supporters in Punta del Este are now just waiting on one final arrival, with Nasdaq in the final stages of its 6,400 nautical mile race from Liverpool, UK to Uruguay.

It has not been an easy finish to the longest opening Leg in Clipper Race history for Nasdaq, whose Skipper Rob Graham reports: “The wind has continued to frustrate us here on Nasdaq.

“Generally, it’s blowing directly from where we are going so that we can't head directly to Punta Del Este, but now it has swung around to the south, we are making a better course. We are now just looking at getting our Code 1 (lightweight spinnaker) up for the last few hours, if conditions turn slightly more favourable.”

According the Clipper Race Meteorologist Simon Rowell, the small high- pressure cell in Nasdaq’s location is going offshore, meaning the winds should gradually build as the team approaches the Finish Line.

Simon adds: “There’s some low stratus around, so Nasdaq might get a bit of drizzle under it. There’s no cloud right now though, so let’s hope it dissipates as the team gets closer in.

Nasdaq will finish the Atlantic Trade Winds Leg 1 in twelfth place and claim one point, whilst Greenings was last night crowned the overall winner.

Followers back home can watch the arrivals of Nasdaq into Uruguay by ‘liking’ the Clipper Race Facebook Live page.

Unless Nasdaq is delayed into Punta del Este, the next Daily Update will be on Thursday 5 October, the day after the fleet begins the South Atlantic Challenge Leg 2 to Cape Town, South Africa. In the meantime, the latest news about the fleet and crew can be found on the Clipper Race Website.

Want to catch up on the action and news from life on board during the Atlantic Trade Winds Leg 1? Then read the Skipper Reports and Crew Blogs, which are all available on the Clipper Race Team Pages.

To stay up to date on Nasdaq’s progress, keep a close eye on the Clipper Race Viewer. All positions correct at time of writing.