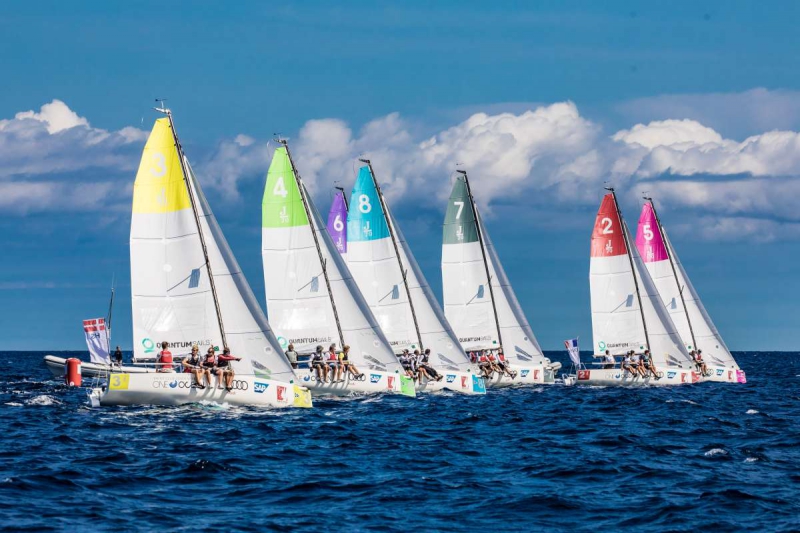 Porto Cervo: A busy day for the 32 teams competing in the Audi Sailing Champions League Final with nine flights completed, making it a total of 36 races run out of a possible 48.

Tomorrow's final race day will bring the event, organised by the Yacht Club Costa Smeralda (YCCS) in collaboration with the Sailing Champions League and with the support of Audi and Quantum Sails, to a close.

Racing ran perfectly to schedule today, with teams taking to the regatta course at 10 a.m. and completing 22 races over the course of more than seven hours in a 12-13 knot south-easterly breeze.

Competition is incredibly close at the top of the leaderboard where each point counted towards losing or retaining a podium position today.

The YCCS team (Flavio Favini, Federico Michetti, Branko Brcin and Luca Faravelli) gave a mixed performance, alternating top finishes with low scores, but maintaining their lead of the overall classification thanks to victory in the final race.

Yacht Club Costa Smeralda Commodore, Riccardo Bonadeo, was delighted with his Club's result and with the victory of Azzurra, flying the YCCS colours, in the 52 Super Series circuit:

“I am proud of the results our athletes are achieving under the YCCS burgee. We couldn't have had a better present today, in our 50th anniversary year, than to have Azzurra's win in the competitive 52 Super Series.

“This is the third time the Roemmers family has guided Azzurra to triumph on the circuit, but today is particularly poignant as we dedicate this achievement to a very special person and a passionate supporter of this campaign, Jimmy Kerkoc, Vice President of our Board, who passed away less than two months ago.”

In third place is Lord of the Sail – Europe (Evgeny Neugodnikov, Viacheslav Ermolenko, Iurii Popov and Sergey Musikhin), which came back from an OCS in today's second race with victory in the third race (4-OCS-1-3-2).

Guillaume Girod, Swiss Laser sailor and helmsman of Société Nautique de Genève, commented on the day's events: “At the start of racing we weren't very consistent, but we got better towards the end and finished in the top three so it went well.

”The crew has trained; they took part in the Audi J/70 World Championship last week and we also sailed together for a few days before this race, but we can always learn more. We were more aggressive in our starts today compared to yesterday and we will try to improve again for tomorrow's final day.”

After a full day of competition, teams gathered this evening for a Team BBQ Dinner at the YCCS Clubhouse in Porto Cervo. Racing will continue tomorrow, Sunday 25th September, with the first signal scheduled for 10 a.m. and north-westerly winds of 7 – 10 knots forecast.