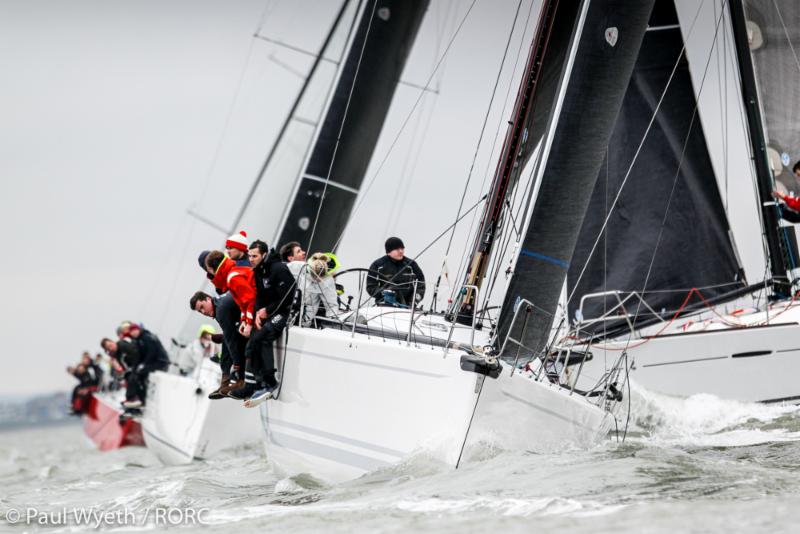 Conditions caused racing to be cancelled on the third and final day of the RORC Easter Challenge – at 0900 when the decision was announced, PRO Stuart Childerley explained: “Currently we have less than 5 knots on the Solent and a lot of flood tide for the next hour and a half, which will be very hard for the boats to make over the ground in that wind strength.

“Then as the tide improves for a very short window the wind is forecast to drop to nothing and then the tide will deteriorate. So the long term future for the day is not good and the current conditions are not sailable. In view of it being a training regatta, Easter Sunday and having had two really good days, let's make a decision and move on.”

The prizegiving for the Royal Ocean Racing Club's training regatta and domestic season opener was held at their Cowes clubhouse at 1030 .

Coming away most laden with chocolate was Tony Dickin's crew on the FAST40+ Jubilee, which won every race in IRC Zero.

“The last couple of years in the FAST 40 have helped us to refine how we sail the boat and we're constantly working on little things like sail shapes,” said boat captain and pitman Gregg Parker. “It was our first sailing of the year, so it was nice to get out there and tune up.

“We sailed reasonably well but by no means flawlessly. It wasn't necessarily a performance worthy of straight bullets.

“The race committee did a good job and took some bold decisions. Today we were disappointed not sail, but there was no wind and Stuart needs to be applauded to have made the decision not to race early on.”

“Friday was a bit of a trial by endurance with all the rain, but that was the same for everyone,” said Wishart, using this event as training for June's Commodores' Cup. “We have had a great few days. It is great regatta. We have a bunch of young Scots….”

Perhaps smartest crew was that of James Chalmer's J/35 Bengal Magic, which made the call early not to race Easter Sunday having taken the lead after yesterday's four races in IRC Two.

The most impressive display of consistency was once again Sam Laidlaw and his supreme team on the Quarter Tonner Aguila, which claimed straight bullets in IRC to win the smallest class for a fourth consecutive year.

“It was good racing,” said Laidlaw. “Friday was very cold and wet, probably the coldest and wettest we've had in a Quarter Tonner, but yesterday we got in four good races on great courses and it is all good practice. It is great to be back in the boat – we haven't sailed since August.”

Aguila is currently the Quarter Tonner to beat having won the Coutts Quarter Ton Cup in 2017. One of the reasons for her success is having had a consistent crew for the last seven seasons, comprising Brett Aarons, Dan Gohl, Tom Forrester-Coles and Robbie Southwell.

“The crew is the key to the whole thing – in the second yesterday, we tore a kite and the crew had the next kite up in probably less than 15 seconds,” said Laidlaw.