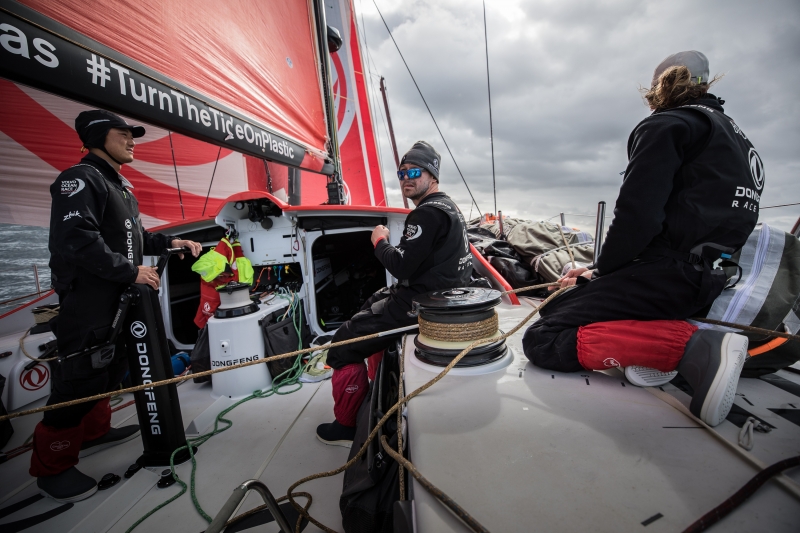 Volvo Ocean Race veteran Bouwe Bekking is predicting a photo finish to Leg 7 as his Team Brunel leads Dongfeng Race Team into the final 36 hours of what has been a massively challenging leg.

Less than six miles separate the two boats on Monday, and with 400 miles to the finish line in Itajaí, Brazil, Bekking says they are only going to get closer.

Aside from a small window where Dongfeng passed them temporarily 36 hours ago, Brunel have led Leg 7 for more than 3,000 miles through the Southern Ocean and into the South Atlantic.

But Dutch skipper Bekking, the race’s most experienced sailor, knows better than to assume he has the leg wrapped up, and as such is rallying his team for one last battle with Dongfeng.

“The good news is that we have been eating the miles towards the finish quickly,” said Bekking. “Over the last five hours we averaged just under 24 knots!

“You think you will be making big gains but no, only two miles on Dongfeng. They are pushing hard for the oh-so-important difference of the three extra points gained by coming first in this leg.

“You’d think we would have a healthy lead, but the bungee cord gets shorter again, in fact it doesn’t exist anymore, as the routing has the two of us finishing within a minute!!

“It will be a battle between the yellow and the red bus for the next 36 hours.”

As water and air temperatures rise, Charles Caudrelier’s sailors on Dongfeng are just starting to allow themselves to put memories of the brutal discomfort of the Southern Ocean conditions behind them as they sail north.

“We have just passed the high pressure today and our world has completely changed in the last 24 hours,” he said. “The water temperature has climbed from 9 degrees to 20 and the air from 3 degrees to 18 in 48 hours.

“I think our bodies and our minds are just relieved to be free of the pressure and the fears of the south and we can relax. When you sail in this area you have to disconnect your brain to forget your fears, the cold and the humidity.

“Now we have 48 hours left to try to pass Brunel, but first we have to finish the leg without breaking our boat. Most of the fleet have had issues and our priority now is to finish.”

Team AkzoNobel remain in a comfortable third place, 200 miles from the leaders but also with a gap of around 240 miles to fourth-placed Turn the Tide on Plastic and MAPFRE in fifth.

The back markers were today both trying to escape the clutches of the high pressure system, whose light winds are slowing their progress towards Itajaí.

Both teams have suffered significant damages on this leg – MAPFRE’s main track was damaged early in the leg and their mainsail was ripped in two rounding Cape Horn, while Turn the Tide on Plastic’s mast was in jeopardy due to an issue with a spreader (one of the horizontal struts that helps to suppor the mast).

So a break from the relentless conditions of the Southern Ocean has been welcomed. For the Turn the Tide on Plastic, the lighter winds and flat sea meant the team was able to make a significant repair to the rig, and the team is back up to 100 per-cent, flying masthead sails again.

On the other hand, the lighter conditions mean they’ll be at sea for longer and both teams could end up more than three days behind the frontrunners by the time they reach the finish line.

“From one extreme to the other – here we are trying to sail north with no wind through a high pressure,” MAPFRE skipper Xabi Fernández said. “It is ok though, I don’t see the people complaining yet as we are happy to have a few quiet days.

“We’re still fighting to get one more position, so we still have the motivation to sail properly and the watches go quick.

“Since we hoisted the repaired main we keep looking up and it looks like it is going to hold so it is good news for us. The track in the mast looks fine too and we are following the timings of the routing more or less ok. This is giving us five more days of sailing!”

The ETA for the leading pair is as early as 1500 UTC tomorrow (Tuesday), although a localised area of light winds in the finish area could push that back by several hours. Team AkzoNobel is forecast to finish 36 hours later, with the trailing pair not arriving until the weekend.

Team SHK/Scallywag continues its progress towards making landfall on the coast of Chile, while Vestas 11th Hour Racing is working through logistical options from the Falkland Islands.