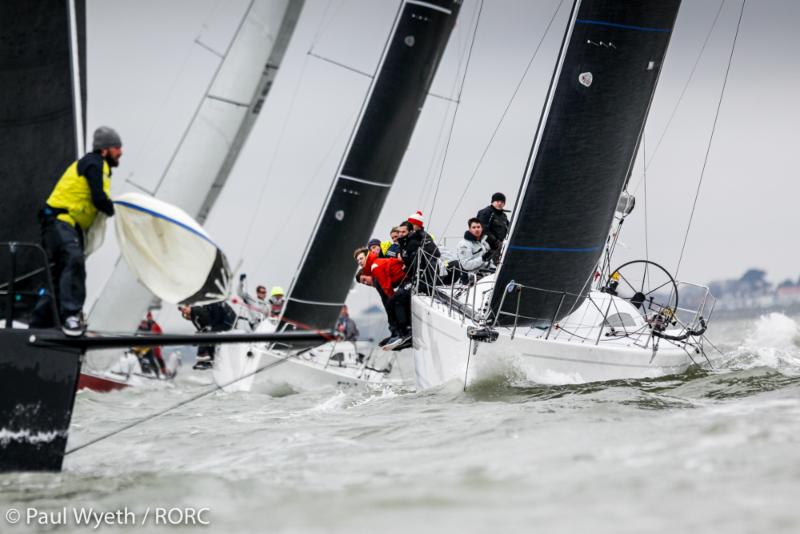 At yesterday's Easter Challenge post-race debrief at the Royal Ocean Racing Club's Cowes clubhouse, coaching legend Jim Saltonstall advised crews that he and the coaching team from North Sails would be examining rules.

Today competitors duly obliged, assisted by one of the strongest tides of the year. This caused numerous close encounters; taking boats over the start line early; on to weather marks; one even snagging the race committee boat's anchor chain. Tonight the queue outside the protest room resembles a doctor's waiting room.

For day two of competition there were 6-12 knots of wind, the temperature on the water was just 5 degrees Celsius, but seemed balmy compared to yesterday's Siberian conditions.

Stuart Childerley's race management team staged three windward-leewards on the central Solent followed by a round the cans grand finale to get the boats home.

Positions are now firming up, especially in the biggest and smallest classes where Tony Dickin's GP42 Jubilee in IRC Zero and Sam Laidlaw's Quarter Tonner Aguila in IRC Three hold straight bullets and will be hard to beat with just Easter Sunday's races left.

Baraka GP had a better day overhauling the Ker 46 Lady Mariposa to claim second place in IRC Zero. Harmen de Graaf's Dutch team is getting grips with their new boat, although transferring from a GRP Ker 40 to a carbon fibre Ker 43, both of a similar vintage, has made life simpler. “This is a better boat,” states de Graaf eldest son, Dirk. “This is carbon, so she accelerates better downwind and she's stiffer.”

However they had to mount a strong recovery in today's third race, when, like so many boats today, they were over early.

De Graaf admits they are still on a learning curve. “Today's last race was the first time we had used the Code 0. Yesterday we had to work out how to use the string drop system for the spinnaker (which we didn't have on the old boat).

“Today we did our first five second drop!” Such systems from the America's Cup, TP52 and Maxi 72 classes harness the pedestal grinder enabling the spinnaker to be rapidly sucked below.

Closest competition this weekend is in IRC One and the newly created Performance 40 class, where Michael Blair's Cobra crew today overtook sistership and nemesis Roger Bowden's Nifty, ending the day one point ahead. Today both scored two bullets, but Nifty lost the lead after scoring a seventh in race two.

Blair said he was surprised to be leading the First 40s where Adventurer out of Sailplane, skippered by Jock Wishart is lying third, six points ahead of RORC Admiral Andrew McIrvine's La Reponse. “We thought it was going to be much more difficult against the First 40s. Maybe they will come through in heavy weather.”

Competition is also tight in IRC Two, where the crew of Bengal Magic, the 1983 vintage J/35 that competed in the Commodores' Cup two years ago, has made a sterling return after a year out of sailing.

“Today was fantastic racing, very close,” said skipper James Chalmers. “The second race was so exciting. We got to the weather mark among Jubilee, Cora, Strait Dealer and even Redshift – a proper mark rounding! We were pushed left on the run, but we saw a bit of a gap, popped the gybe in, soaked into the mark, got inside Strait Dealer to win the race. There were only seconds between us.”

As a result Bengal Magic, that is older than the majority of her crew, has pulled into the lead ahead of Ed Fishwick's Sun Fast 3600 Redshift Reloaded.

Redshift suffered in today's third race when she and Jubilee were OCS. “We only found out about 30 seconds later, but we did quite a good job to dig ourselves out of it,” said tactician Nick Cherry.

“It's nice to be one of the bigger boats in our class, as we can get clear lanes. Plus the reaching suited our boat – we'd like more of that.” Redshift Reloaded won today's final round the cans race.

Behind the dominant Quarter Tonners in IRC Three, Peter Cyriax and the crew of the S&S43 1965 Admiral's Cupper Firebrand have been getting to grips with the boat that once belonged to the late yacht designer Ed Dubois.

“Today was very pleasant – it didn't rain and it wasn't as miserable. The courses were good. The RORC were working hard to give us sensible courses,” said Cyriax, who has been making use of the free coaching on offer. “We have two problems – upwind speed and getting our crew work sorted out.”

Whether he will be able to work on this further tomorrow is in the lap of the Gods with light winds forecast prior to a prizegiving where the Easter eggs aplenty will be apportioned across the fleet.