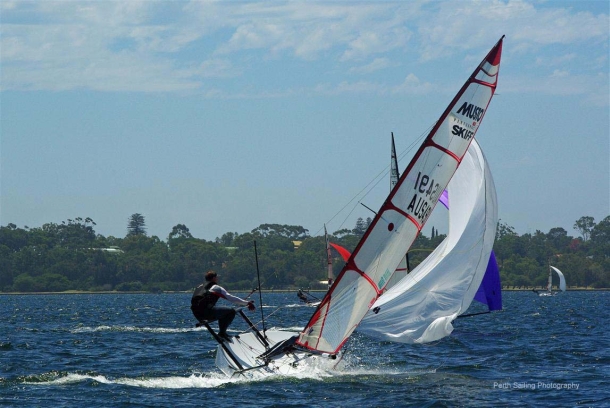 Predict Wind said one thing and the BOM site said another. Both of them were right. Three races were held on Melville Water West with a variation of wind strengths in the first two races ranging from 20 + knots down to 9 knots with a third race that experienced a booming comeback from the wind gods. This took the left hand side of the course up to 20 knots and started bowling the tailenders over.

The clue is in the last sentence. We didn't have the normal sea breeze on the river and the wind spectrum worked between a west sou westerly to start, that shifted into the south and then came back into the south west over the day. The winners were in the south if they could read the shifts on the water. RO Andy Cowan had the crew shifting the marks as required and maintained a good length and race time for the whole day, though AP's were required occasionally.

With a three race schedule, the race was started on time and the high winds had every one working hard to get the top end with some having to retire with equipment failure.
As the wind dropped out, the second lap was easier but the breeze started to move around and John Newman had to worked his way to first, followed by Ian Renilson and Marcus Hamilton.

Race two had the breeze kicking in a little with the left hand side favoured. A single recall on the start was ignored and after the top mark, John Reekie gybed into pressure and the lead with John Newman grabbing second, On the upward beat, a right hand shift gave John Newman the lead that was not relinquished. Thor Schoenhoff took second and sadly, due to John Reekie being OCS, Ian Renlison took third.

The third race saw a general recall that saved face for Paul Dijkstra, as he'd hit the pin end boat on the way through while pushing his luck. On the next start, a pod of dolphins joined the start line and had a clear advantage over the fleet as they were not subject to Hughie's demands. Sergei  Samus needs to be remembered for a port crossing that covered the fleet, but he was so enamoured with the stunt that he went too far to the right as the left hand fleet took advantage of the pressure that was on the water and stormed home at the top. The breeze dropped out on the final leg and had the pack split up chasing the shifts. Jon Newman took a couple of gybes that took him past a strong group of Brett, Schoenhoff and Dave Postern but Renlison had managed to get to the front in the mean time and had Thor Schoenhoff, Jon Newman and Paul Dijkstra follow him home.