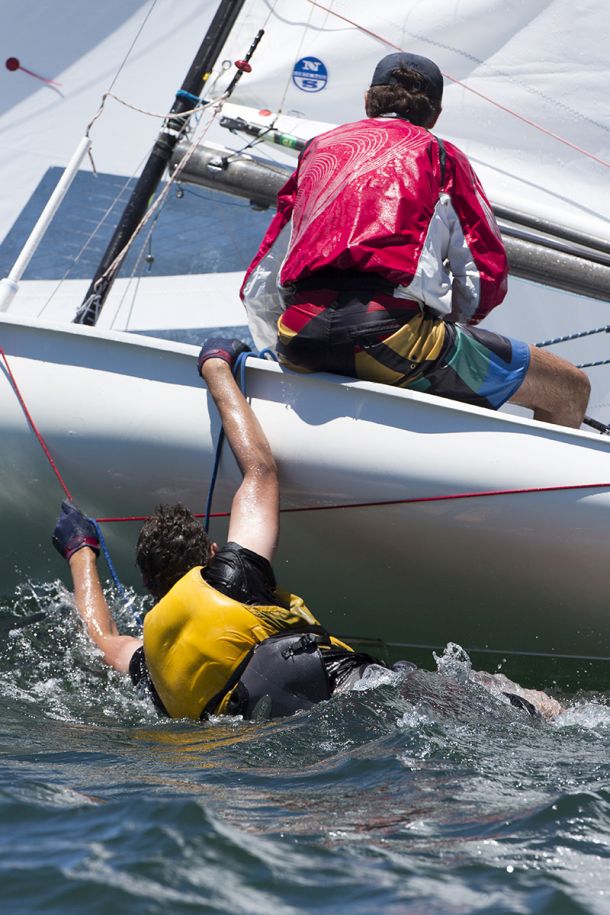 It didn't all go according to plan. Photo Andrea Francolini.

08/01/2015
Hungary's Szabolcs Majthenyi and Andras Domokos have claimed their 11th Flying Dutchman World title following a dominant display in Sydney, Australia. With a day to spare and one further race scheduled the Hungarians have an unassailable lead with their worst result of a second their highest discard of two.
Enno Kramer and Ard Geelkerken (NED) have guaranteed themselves silver medal whilst the final podium spot is to be decided in the final race after an exciting penultimate day.

Heading out to race at 11:00, all of the Flying Dutchman Worlds fleet were refreshed and relaxed after the Tuesday lay day.

The fleet was complete, as all repairs had been completed. Szabolcs Majthenyi and Andras Domokos were noted as being calm and relaxed, arriving late and dressing on the way out to the start.

The race organisers had a real task with two other races planned in the same area – the State titles for the Australian sports boats and 12ft Skiffs also scheduling Wednesday afternoon sailing on the harbour.

The wind was around 8 knots from the north east, and setting the top mark was proving interesting. Combined with avoiding the cardinal mark at Shark Island, the race organisers noted that coming over Shark Island were fluky winds that were spinning around all over the place. Additionally, there was a lot of tide running out and Bradley's was deemed to be pay out.

At 11:55 the orange flag finally went up – 10 minutes to racing. The course was set as W2 with two extremely elongated sausages and a beat to finish. The Australian Sports Boats were first to sound there indicator starting gun and it looked like they may start straight through the FD fleet. Sensibly, the starters called a postponement carefully avoiding what could have been chaos. When the start finally happened the line was close and the need for individual recalls was sounded.

At the top mark it was Majthenyi and Domokos, Australia's Matthew Whitnall and James Bevis, Kramer and Geelkerken and Germany's Kilian Koenig and Johannes Brack – so some variation in the leading three. Whitnall and Bevis were seen prior to the race picking the experienced brain of Ian McCrossin and brushing up on specific FD skills given their core competency (national champions) is in 505's, the additional coaching showed early. At the second top mark the first four boats were unchanged. However by the end of the race Majthenyi and Domokos were the clear leaders with an extremely close second and third between Kramer and Geelkerken and Whitnall and Bevis respectively.

Race 8 commenced at 14:40 with some boats having to perform a recall, while others ended up disqualified. The fleet was fully split for the first time this regatta, 50:50 LHS and RHS. At the top mark Whitnall and Bevis were first around the mark with Ian McCrossin and James Cook, the Dutch pair and Koenig and Brack all in the mix. Interestingly, at this stage Majthenyi and Domokos were placed around 13th for the first time this series, having experienced some troubles. As they went down wind Majthenyi and Domokos went wide and then jibbed to rapidly overtake many boats. At the second top mark the order had shifted to Koenig and Brack, Kai Schaeffers and Johannes Brack (GER), Whitnall and Bevis and Kramer and Geelkerken. But the course was extremely long and the breeze was strengthening, so change was inevitable. By the final beat the racing was extreme and exciting; finally someone looked like they might beat the Hungarians. And yes they did, congratulations to Koenig and Brack who came first followed by Majthenyi and Domokos Schaeffers and Brack and Kramer and Geelkerken.

For others it was a hard day at the office and they returned tired and deflated as the regatta draws to a close. Each are calculating what the order may be after drops while Majthenyi and Domokos may have to drop a second – very sad – congratulations guys.