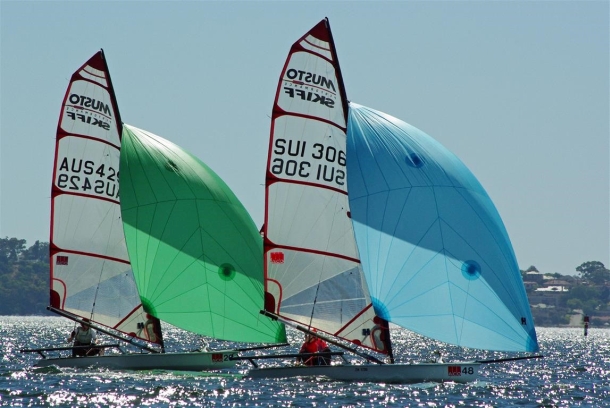 Thirty eight boats came to Perth to compete for the Nationals and World Championships and they were entranced by the laid back atmosphere offered by their host club, the Mounts Bay Sailing Club. Internationally recognised Race Officer Andy Curnow assembled a great team to look after both the nationals and worlds and by the time that the nationals were finished, the entrants had learnt some of the Swan river's ways and were ready for the worlds.

The first day of the Musto Worlds started as a scorcher with the temperature climbing into the 40’s. Unfortunately this meant that the weather was not going to cooperate and an early AP had the sailors looking for the start of the sea breeze.

And Hughie came to the rescue with a breeze of about ten to fifteen knots and flat water for all. Following the big winds of the Nationals on Melville Water, it was a pleasant change to go out in a moderate breeze.

After a general recall, the RO hung out a “soft” black flag and the restart was clean. Paul Dijkstra of the Netherlands went left with the fleet in tow and as the sea breeze tracked left, he overlaid the mark, giving Australians Tim Hill and Jon Newman to round the top mark in front. The leaders took the right hand side of the course enjoying the gusts coming down under kites and the lead swapped several times before they swung back up to the top mark again. Tim Hill managed to stay in front of a determined challenge by Jon Newman down the centre under the gusts rolling through the course. Tim took line honours with Jon Newman 2nd and Dave Poston 3rd.

The next race had no challenges at the start line and the best of the fleet took off to the left with Paul Dijkstra in the lead again. With the gusts moving down the centre of the course the fleet began to work their way up to the top utilising the shifts as they came through. As the race progressed the wind began to drop and despite a great finish by Jon Newman, Paul Dijkstra managed to waft his way past at the finish with brothers Jon and Paul Newman finishing 2 and 3 while holding out a fast finishing Arthur Brett.