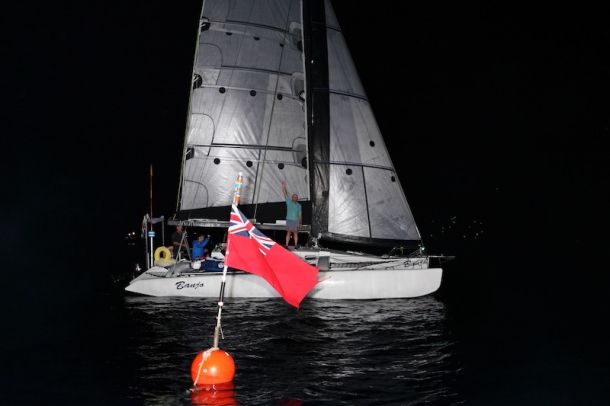 Webb commenting as he crossed the line early this morning said: “We are thrilled and excited to have again won line honours in the Governor’s Cup race and, as a team, finally break the record. We also significantly improved on our own time of 10 days and seven hours set in 2012. My crew (the same as 2012) were outstanding and we worked well as a team which saw us safely through some pretty rough conditions for a 31ft  trimaran.”

After an exceptionally lively start from False Bay Yacht Club, Simon’s Town on 27 December, when winds gusted up to 40kts, the race developed into a game of tactics with those opting for the more northern route towards St Helena generally benefiting from stronger, more consistent winds.

Webb, van der Merwe and Stemmett weaved their way to an early on-the-water lead soon after the start and were first round Cape Point later that afternoon, which enabled them to slot into a downwind roller coaster ride in the relentless wind that lasted for several days.

Webb continued: “The highlight of the race was rounding the Point in first place after a taxing beat in very strong conditions. Banjo is fast downwind and we never looked back from there. We had a fairly tough night when our three-metre long bow pole snapped off after we ploughed into the back of a steep wave. We had to secure the pole to stop it from damaging the hull, which was quite difficult in the five-metre swell and 30knot wind in a pitch-black night. However, Brad and Sarel got it sorted and we went on our way again. We later rigged a makeshift bow pole so we were able to fly our spinnaker.”

Although Dave Immelman and his team on Black Cat (Dudley Dix 38) sailed well and threatened Banjo’s lead, they were ultimately unable to match the speed of the Farrier trimaran in the closing stages of the race. According to Webb Banjo sat in no wind for eight hours on Sunday. “We had a bit of stressful time but once the wind arrived it was from a good angle which allowed us to make 12-13kts of boat speed in about 15kts of breeze.”

Reporting on a similar scenario yesterday, aboard Black Cat, Immelman said: “After managing to skirt around a high two days ago we could not get another weather report in, and to our dismay there was a second area of high pressure which we sailed straight into. We have finally managed to get our nose into some wind… we will just have to sail like mad for the finish.”

Further down the racecourse the conditions are less favourable with many competitors struggling with boat speed in the light airs. With just five days until the cut-off time, the situation looks bleak, particularly for those still with over 700-nautical miles to go.

According the Bram Weller – the Race Officer at the finish line in St Helena – there is a good chance some boats won’t make the race deadline. “It is very concerning the wind has dropped so much, and the outlook doesn’t look promising either. As it stands at the moment half the fleet is not going to finish the race within the time limit which is 1200 GMT on Saturday 10 January, unless the race committee extends the deadline. At this stage there are just seven boats – Banjo, Black Cat, Avanti, Strumpet, Vulcan 44, Canace, and Revelation, who’ll make it, while Carel Jacobs and team of the Baltic 42 Cool Runnings looks like they might miss the cut off by seven hours.”

Given the conditions, the overall winner of the Governor’s Cup 2014/15 is still uncertain although it is looking more and more certain that it could go to Klaus Wiswedel and team on Avanti (Vikers 41) in Racing division.

Team Avanti from Royal Cape Yacht Club have sailed a tactically good race, keeping well north of the rhumb line, and have managed to keep up the momentum. In the last couple of days they have recorded the biggest distance sailed in 24 hours – 138 miles as opposed to Cool Runnings (also in Racing division) that recorded 41 miles on Sunday.

Stephen Wilson and team on Vulcan 44 (Humphries 44) made a decision to switch on the engine on Sunday and opt out the Racing division. They are leading Cruising division with Kevin Ward and team on Canace (Elan 435) in second. Wilson chatting from the racecourse last night said: “It is still early days so we’re not getting too excited at the moment. We are currently heading north in hope of picking up a slightly stronger south-easterly breeze that will put us on course for the Island. There has, however, been plenty of time to reflect on the highlights of the race so far including the strong winds round Cape Point, our New Year’s Eve party where we opened little gifts from our home club – False Bay Yacht Club – and the steak dinners, fine wine and entertaining discussions. Us old seadogs continue to have fun.”