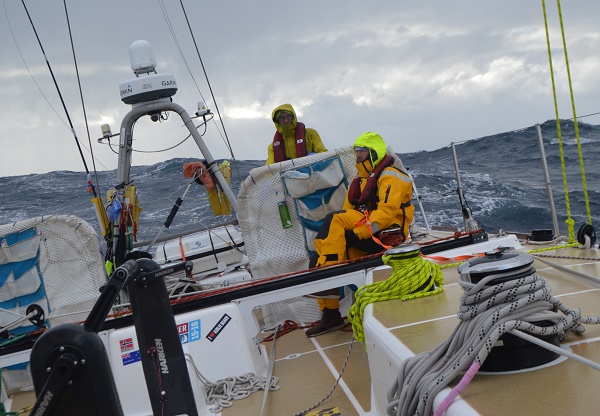 The frontal weather system currently passing over the fleet has not been as strong as the last, but has provided another day of excellent mileage in the final push to Seattle. Following seas, good kite runs, and winds gusting 40 knots have been reported, with this expected to build and improve today as a second weather system moves in rapidly from the west.

Race leader Derry~Londonderry~Doire began the Ocean Sprint at 2250 UTC last night and is now almost half way across, with second place Unicef and third place LMAX Exchange having both very recently joined them in it.

Keeping an ever watchful eye behind him, Skipper Daniel Smith, of the Northern Irish team reports: “We've had a couple of position updates now where the following boats have been catching us. This is due to them receiving the new stronger winds first. We have now entered the Ocean Sprint however and the breeze is building. Hopefully this will be a final uninterrupted charge to the finish.”

In the ongoing cat and mouse battle between second and third place, Unicef hasmoved ahead in the leaderboard once again following a stressful day on board LMAX Exchange.

Skipper Olivier explains his team’s unfortunate day: “At the end of yesterday, everything began to get difficult. First we wrapped the medium weight spinnaker around the forestay during a gybe. The kite went down with difficulties and we had some repairs to do. As our heavyweight spinnaker is out of order, we sailed with our Yankee 1 waiting for the repair.

“The night went down and after two hours, as the wind eased, we hoisted our lightweight spinnaker. We then discovered the halyard was turned around the forestay. Drop lightweight kite, hoist Yankee 1! The wind picked up a bit and the medium weight kite was ready to use. After a great repair done by Anna Estruch and Dominique Hausser (round the world crew), the medium weight went back up,” he continued.

In his daily blog Olivier goes on to describe that another two sail changes followed, before finishing by saying: “This night was a real nightmare with stressful drop and hoists. We’re looking forward to heavy winds and white sails sailing!”

Inmore positive spirits, as the team eyes up its best race finish to date, Skipper Matt Mitchell of fourth placed ClipperTelemed+ reports: “Progress has improved and we are making a beeline for the finish line. The wind has been on the up for most of the day, so now not having a suitable spinnaker is less of a disadvantage.

“A low pressure system is moving its way towards us and the by the way the clouds have been filling in, we will expect the front to pass over us at some stage tonight. This should be good for progress and the strong westerlies behind the front will give us even more of a boost.”

Also keeping a positive eye on the incoming weather conditions, Greg Miller, Skipper of seventh placed Mission Performance says: “The wind is moderate at the moment as is the sea-state, but with an increase of wind forecast in the next few hours or so we expect the sea state to follow suit. Until then we are holding our largest headsail and hoping that it helps us reel in the runners ahead of us.

“The speeds we are reaching are fairly impressive with long surfs being achieved, it’s good to hear the whooping and screaming from the helm station, even at this stage of the race! Mostly of course from our Leg 6 Warrior and alumni Craig Forsyth! He is so excitable!”

At the rear of the fleet positions remain unchanged from yesterday, but ninth placed Visit Seattle has increased its lead on PSP Logistics to 58nM as it heads towards its home port.

Having damaged its bowsprit earlier in the race, Skipper Wendo Tuck says Da Nang – Viet Nam is feeling the effects of not being able to fly a spinnaker when the winds would otherwise allow it. However, currently in eleventh place, ahead of IchorCoal which is now less than 1500nM from the finish line, she also reports the team is still managing to record speeds as high as 27.3 knots.

** The Clipper Race Committee has agreed to Derry~Londonderry~Doire’s request for 2 hours 27 minutes of redress whilst the team suspended racing (28 March 2016) to rendezvous and transfer watermaker spares to Garmin.

When Derry~Londonderry~Doire finishes, 2 hours and 27 minutes will be deducted from its elapsed time. As per the Sailing Instructions, Garmin is not eligible for redress and has not therefore applied for it as redress is not available for broken or malfunctioning equipment.