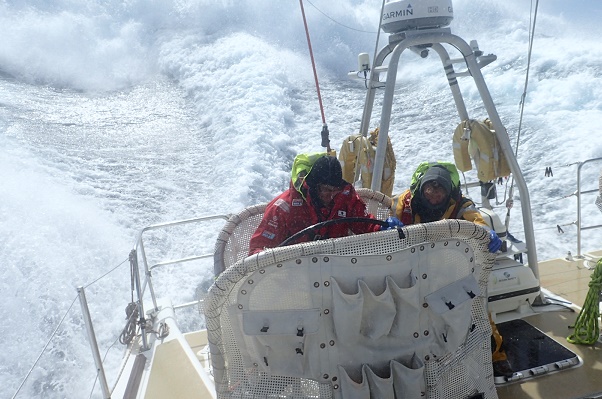 The Clipper Race fleet is experiencing the ‘North Pacific Railway’ right now, according to race Meteorologist Simon Rowell, with a regular timetable of low/ridge/low coming through.  A ridge of high pressure is whipping through the fleet from west to east today and then it will be back in the thick of another strong low system by tomorrow.

Teams have been consolidating their positions to ride the rollercoaster of weather systems and it remains relatively tight amongst the front half of the fleet as the miles count down to Seattle.

In second position LMAX Exchange has a lead of around 17 nautical miles over Unicef as at 0700 UTC this morning, chasing leader Derry~Londondery~Doire just under 105nM ahead. ClipperTelemed+ is 9nM behind Unicef with GREAT Britain only 11nM further back.

The variety of conditions reported by skippers indicates the ridge is passing over the frontrunners this morning.

GREAT Britain Skipper Peter Thornton reports: “The last 24 hours has brought with it an ease and veering of the wind in the early hours of this morning followed by an increase and backing again this afternoon. The rain also has moved over the top of us now and we are currently sailing under a clear sky.”

Leader Derry~Londonderry~Doire had a white-knuckle ride before the winds eased according to Skipper Daniel Smith: “We'd started to believe that maybe we'd outrun the storm. We'd had a consistent 30 knots with it touching 35 and been making great speed. The weather files indicated we'd had the peak wind strength and it would gradually be easing.

“The Pacific had other ideas…the wind built to 40 knots and 2 reefs went in. Conditions were wet with black, starless skies and confused seas making helming very hard. By the morning the wind was increasing again so breakfast was put on hold. We spent the day with high winds gusting up to 58 knots. Now the light is fading, wind easing and weather files indicating less wind again.”

At the back of the fleet another deep depression is trying to blow IchorCoal speedily on to Seattle, but the team is coping admirably with some record boat speeds according to Skipper Darren Ladd: “The night was one of the longest in memory. The odd rogue wave crashing over us jarred the foundations of the boat yard in Qingdao. Either we got used to it or it eased a little because by first light as it was merely gusting 70 knots.

“This morning, while still only flying the storm jib and deep-reefed main, Dave Hartshorn (Leg 6 crew member) managed 27 knots, easily breaking his earlier personal best of 24 knots. We're trucking! The conditions finally abated enough to stick a gybe in so the good ship IchorCoal is finally pointing directly at Seattle.”

Other teams are starting to look forward to the final thousand miles to Seattle and Garmin, currently in sixth, is already revving up for the Ocean Sprint approaching in the next couple of days. Skipper Ash Skett says: “Next on our radar is the Ocean Sprint, now just 600nM away. The forecast for this is currently looking decent for us, with a front due around the same time as our arrival. This should give us a welcome boost and a fair chance of setting a good time. Still, that's a couple of days away yet and, as we know, forecasts can change.”

But meanwhile it’s a case of hanging onto the ‘tracks’ of the North Pacific Railroad. Mission Performance Skipper Greg Miller commented: “As Simon Rowell (the Clipper Race Meteorologist) put it, the North Pacific train has arrived to speed us towards the US coast, 1400nM is still a long way and anything can happen in that time!

“What Simon meant by the North Pacific train is a line of low pressure systems followed by a ridge of high pressure being pushed along by the next low, and so it continues until we get to Seattle, we hope!”

The biggest long term question according to Simon Rowell is what the East Pacific High is going to do, whether it will form a massive blocking ridge along the coast or get squeezed south by the train of lows.  We hope for the latter, but it’s still a bit early to say.