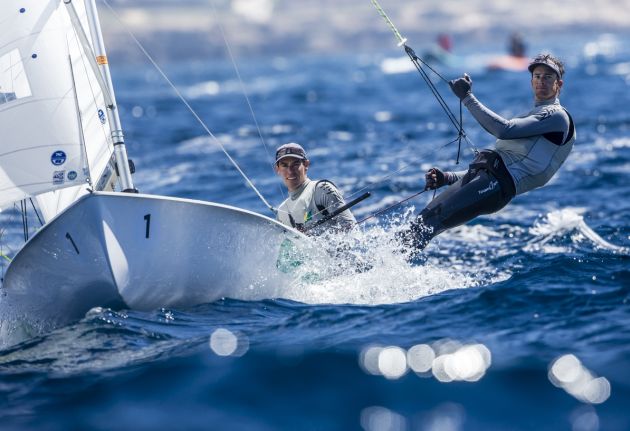 Three races for all fleets at the 2016 470 European Championships on race day 4, sees Lara Vadlau/Jola Ogar (AUT) extend in the 470 Women and Mat Belcher/Will Ryan (AUS) edge into the lead in the 470 Men.

With only two days to go before the Medal Race, today's assault on the leader board top ten intensified. The physicality of each race is relentless, as winning is all about maximizing strengths and minimizing weakness in gruelling race track battles. A blue sky, 10-14 knots of breeze and rolling waves gave teams a perfect race day.

Racing on Monday 11 April will decide the top ten 470 Men and Women teams advancing to the double points Medal Race. Two races scheduled for the men gold fleet on Monday starting at 1130 hours, followed by three races for the women gold. A similar race programme for the men and women silver fleets, but kicking off at 1200 hours.

Big drama in the men’s fleet saw a complete change in the top three. Series leaders Lucas Calabrese/Juan De La Fuente (ARG) dropped to 7th overall, with Mat Belcher/Will Ryan (AUS) climbing to the top. The Aussies scored a 1,3,2 to slip into the lead, ahead of Croatia’s Sime Fantela/Igor Marenic.

“It was a really pleasing day and good to get into a rhytmn and back to final groups,” commented Belcher. The conditions have been pretty difficult the last days and a lot of the top guys have been back a bit and its great to see some of the younger generation coming through and getting experience at the front of the fleet. I guess experience counted today, when a bit more pressure came on and its great to be moving up the leader board.”

Responding to how it felt losing his World Championship title in February after a run of six successive victories, Belcher said, “It’s a difficult situation and I don’t think anyone’s really been in the position of winning six Worlds in a row and then come away with a third. A lot of people would be happy, as a World Championship medal is amazing, particularly in an Olympic year. Will and I were a little bit disappointed with how we sailed, and we could have sailed a bit better. Here we are just trying to focus on ourselves and its nice to be back up the leader board. But no surprise to see us and Sime having a really good day.”

As they did in 2009, can the Croatian’s win both the Worlds and European Championship titles in the same year? A tick for the 2016 Worlds, which they wrapped up last month. Sitting in second place, 3 points off the Australians, and with two more final series races to go plus a medal race, anything can happen.

In third is the Italian partnership of Simon Sivitz Kosuta/Jas Farneti (ITA) whose speed and race tactics pushed them up.

“An amazing day,” grinned Farneti. “This time we were very close to the others and we lost a few points, but no matter it was a good day. This is our best performance in a senior fleet and we have trained a lot in the winter and this is the result.”

The 470 Men top ten has established some distance ahead of the chasing pack, with 21 points between the tenth and eleventh placed teams. There is a mountain to climb tomorrow for teams to break back in.

“We didn't quite capitalize on some of our chances out there today,” said Hughes, “but it was still a pretty good day. It's gold fleet, with the best up against you, and it could go much worse! We’re also happy to have won the last race.”

“It was nice, a nice day for us,” quipped Vadlau. “The first race I did a huge mistake. I went over the layline upwind, so we lost really a lost and possibility to win that race and I was pretty furious with myself. I said to myself ‘this cannot happen again’.

“I am really, really happy this day was so good and we could do everything that we wanted to do in our tactical decisions and fighting of course like hell.”

“We just look forward and we don’t look back. We sail our own race no matter whether we are leading overall or not.”

Holding a 24 point lead over the fleet it seems inevitable they will wrap up the Championship title, and possibly even do so tomorrow.

All change in the leaderboard behind the Austrians, as Afrodite Kyranakou/Anneloes Van Veen (NED) shift up into second and Japan’s Ai Kondo/Miho Yoshioka move to third. Kondo put their form down to good starts, understanding the shifts and choosing the right side of the track.

2016 470 World Champions, Camille Lecointre/Helene Defrance (FRA) claimed the only race win vacated by the Austrians, but ended the day with a disastrous 26th place out of the 29 boats in gold fleet, proving even the best get it wrong. The French partnership goes into the penultimate day in fifth overall.

“We just did a very bad choice by going to the right in the first lap,” explained Lecointre about their back of fleet finish. “And then it is very hard to come back when you are the last boat and we never succeeded. You can always make mistakes, but just have to do less than the rest. We didn’t sail so well and we also had to do penalty turns,” she continued referring to a 360 turn taken in the first race of the day followed by 720 turns in the next.

“A really cracking day,” joked Siegenthaler. “I think we just had a bad race on the first day and then we had a UFD penalty. We are sailing really well this regatta, but this UFD was very expensive and almost cost us the gold fleet. Now we are very happy to be back and to perform as before.”

Confirmed for Rio 2016 has eased the selection pressure for the Swiss pair, but no easing in performance as Siegenthaler added, “this is a big sailing event, and everyone is fighting hard and the level is high. It is not easy.”

A timely and significant escalation in performance also for Australia’s Carrie Smith/Jaime Ryan as they hunt out national selection for Rio 2016 and move up to 8th overall.

Jubilation for the USA’s Annie Haegar/Briana Provancha who were today confirmed for Rio 2016.

“It’s still hasn’t really hit us yet,” said Haegar. “It is still mid-regatta so we are kind of focused on the next day and getting better for the time being. But it feels amazing and our dream and goal. I couldn’t sleep last night though!”

Haegar securing silver in the Laser Radial at the 2007 ISAF Youth Worlds, at the same event Provancha won gold in the 29er, proved to be the pivotal moment her Olympic was set.

“To say we are going to be Olympians it still hasn’t really sunk in yet,” added Provancha. “It doesn’t feel real. When you work that hard for something and it has been a long road, it is just really exciting. This has most probably been the most stressful two months of my life,” she added referring to the two national selection events, being the 2016 470 Worlds in January and here.