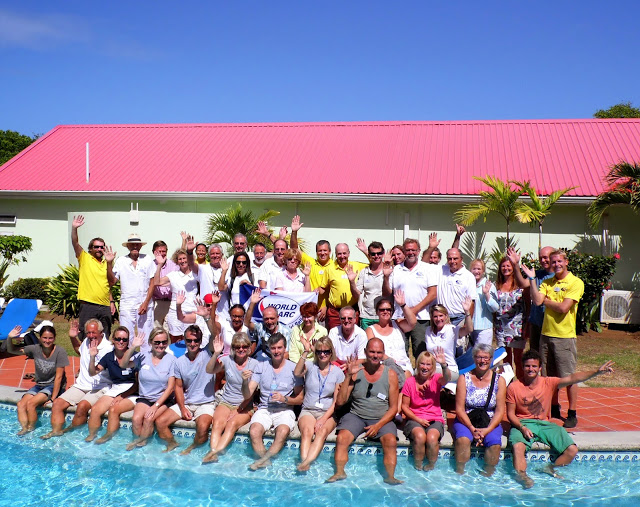 12/04/2016
Fifteen months ago, the World ARC 2015-16 fleet set out from Saint Lucia to sail around the world. Amongst the crews were many nationalities, backgrounds and reasons for taking part. Since then, they have sailed well over 26,000 nautical miles, crossed three oceans and visited more than 17 countries.
As they arrived back in Saint Lucia, they have joined the special band of circumnavigators who have sailed the world on their own boats, and, perhaps more importantly, become a family bonded together by hundreds of shared experiences to last a lifetime of reflection.
This edition of the rally, the fifth World ARC organised by World Cruising Club, saw the fleet visit the new stopovers ports of Santa Marta in Colombia, Raiatea in French Polynesia, and Lombok in Indonesia. Three of those 'completing the circle' this April are doing so after breaking for a year in the Pacific, made possible by the rally now running annually.
The final day of this voyage was always going to be one of mixed emotion; pleasure and pride at the achievement, but also sadness for the end of the adventure. The Parade of Sail and official Prize Giving ceremony provided a fitting finish and the sight of the fleet parading up the coast of Saint Lucia accompanied by local boats, members of the Saint Lucia Yacht Club, media and supporters of World ARC in Saint Lucia was an emotional moment for many. A fresh north-north-east breeze made for a lively sail along the coast, some choosing to reef down to control their speed in the line astern formation which was kept very well given the often blustery conditions.
Crossing the finish line, that had been their start line fifteen months before, marked an end to the circumnavigation with World ARC as they were each personally congratulated by Andrew Bishop, Managing Director of World Cruising Club. “Completing a circumnavigation is a very special moment, and to be here to welcome and congratulate our World ARC participants is always a great experience, especially with a group that has bonded so closely.“
After berthing at the IGY Rodney Bay Marina there was high emotion on the dock at a short drinks reception hosted by the marina, where the participants were welcomed back by IGY Rodney bay Marina Manager Paul Ash, and Andrew Bishop.
The Saint Lucia Tourist Board hosted a really enjoyable prize giving dinner in the evening, where crews were welcomed back to Saint Lucia by the Honourable Lorne Theophilius, Minister for Tourism, Heritage and the Creative Industries in Saint Lucia, who said how pleased he was to see World ARC's return to the country's shores. The evening of celebration continued with superb food, and after-dinner dancing late into the night which was a splendid way to end 15 months of challenge, excitement and fun.
The crews have been spoilt with some beautiful, fascinating and welcoming places all around the globe but speaking on the dockside, all agreed that it will be their friends from the rally that they will miss most as they go their separate ways.
“Sailing round the world with World ARC was amazing, especially the people we met and the places we visited. The experience has been like sailing around the world with friends,” said Kristofer Oliversson of the Icelandic flagged Najad 529, Hugur, “One of the highlights has been visiting islands in the middle of the oceans that people just don't get to!“
Exploring the world together as a 'World ARC family' has made all those experiences into truly special memories to be treasured for years to come.
The Next World ARC Adventure
Since 2014, the World ARC has been an annual rally, with starts each year. A bumper World ARC 2016 fleet of 30 boats left Saint Lucia's shores in January, and have since visited Colombia and the San Blas Island, transited the Panama Canal and crossed the Pacific Ocean.
Reaching landfall in the Marquesas following the longest leg of the rally, the crew of Paw Paw reported their delight, “With the full moon dipping behind Hiva Oa to the west, the sun rising to the east and dolphins frolicking in Paw Paw's bows, we crossed the finish line and arrived in paradise – Our first ocean crossing completed and what a sense of achievement we both have, albeit somewhat surreal. A very emotional time indeed, which was further emphasised when we discovered the most stunning and dramatic scenery as we entered the anchorage of Atuona – not at all what we were expecting.“
Currently the fleet are en route to Tahiti, enjoying the blissful bays and stunning scenery of the Tuamotus and Society Islands.
Meanwhile away from these idyllic surroundings, the adventure is just beginning for those planning their future circumnavigations with World Cruising Club. Entries are open for the next edition, World ARC 2017, and yachts can join in Saint Lucia (January) or in Australia (September), and sail a half rally or make the whole circumnavigation.
Boats can also take a year out to explore Australasia and join the next edition to complete their circumnavigation. Planning a round-the-world adventure takes time and World Cruising Club use experience gained over six editions of World ARC to help and support participants to set sail safely and well prepared. Many future ralliers attended World Cruising Club seminars this Spring in Guildford, UK and Annapolis, USA, some taking their first steps in preparing for life afloat whilst others will be casting off their lines in just eight months' time.