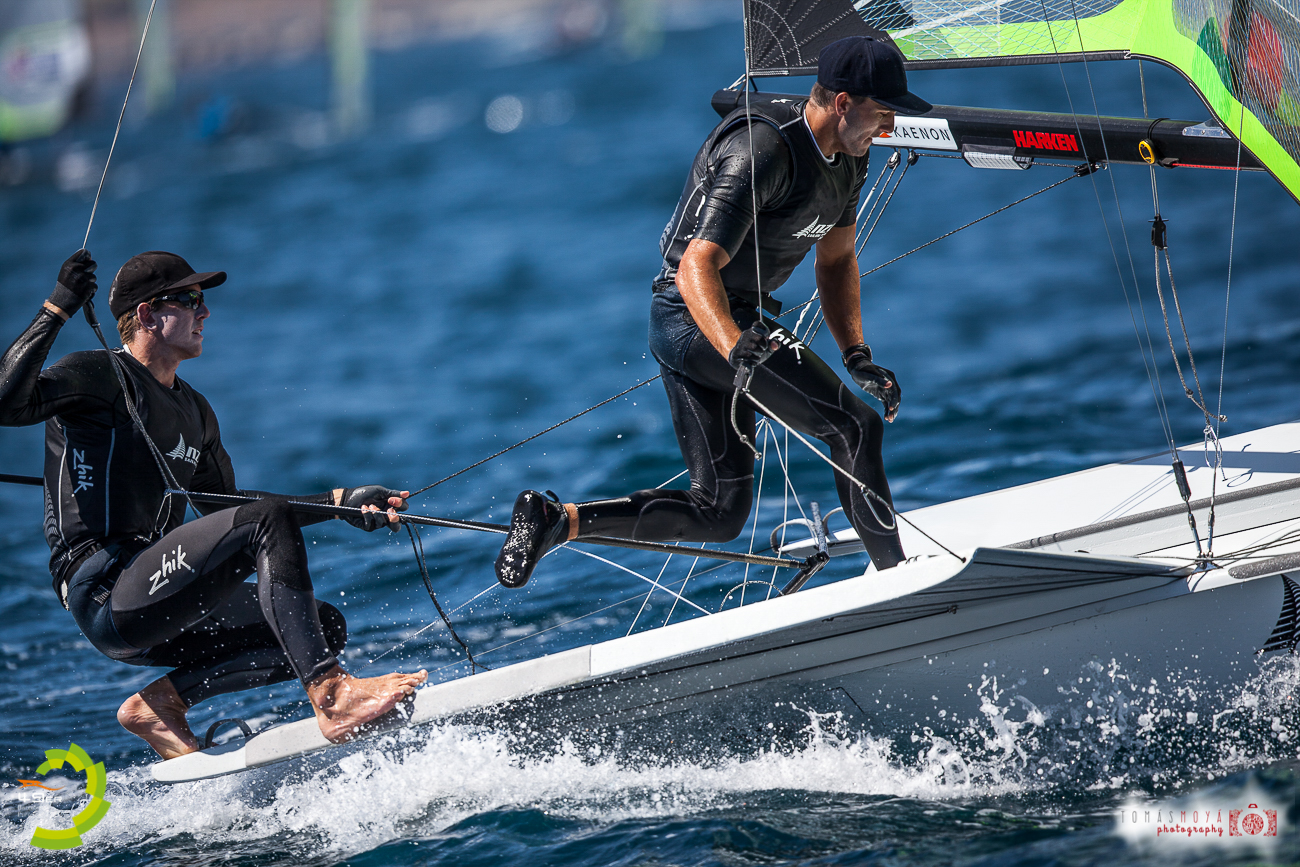 The 49erFX fleet raced first off the waters of Barcelona. As the sea breeze grew it was a much lighter start than day 1, with the teams crouching on the wing for the first two races, before the wind filled in nicely for the third race.

2015 World and European Champions, Giulia Conti and Francesca Clapcich of Italy, have jumped into the lead on a couple of OK races in the light and a bullet to finish the day. Bekkering and Duetz fell back a few points and sit in second after their blazing day one, but the winners of the day were the British duo of Charlotte Dobson and Sophie Ainsworth. Their finishes of 1, 2, 3 on the day move them to the top of a three way tie for third.

In reality, the points are so tight at the top that the regatta will be decided in the gold fleet racing. With two qualifying fleets of only 18 boats each there are many teams able to put up low scores. These Olympic sized fleets are ideal for those looking to tune up for Rio in August, but the Gold fleet for the week of the Europeans will have all 36 competitors and the scores can really pile up.

Tess Lloyd and Caitlyn Elks continue to send a strong message to the Australian selectors, holding 12th place on 34 points, well ahead of rivals Olivia Price and Liza Solly who are 26 points behind in 21st place. New pairing of Haylee Outteridge and Nina Curtis are 23rd, just a point behind Price and Solly.

The qualifying scenario is not quite so forgiving for the 49er, where the qualifying fleets are 36 and gold fleet will only be 25 boats. There is the chance for top teams to pile up many points in the first days forcing serious consequences to the latter stages of the regatta.

The afternoon breeze for the 49er fleet looked like it would mirror day one and be fantastic, but under bright sunshine the wind was much more unstable and difficult to read than expected. The results showed this instability, with all of the top teams taking at least one race farther down the ranking than they’d be shooting for.

Farther down the ranking than desired is a different standard for some than others, and for Peter Burling and Blair Tuke their worst slip up of the day was still a 6th place finish to close out the day. They lead the championship by 10 points by adding a 1, 3, 1, before the 6th. Blair noted how tricky the day was, unexpectedly so, and said they were all over the start line in the various races to try and get a handle on the wind.

Having an outstanding day by any normal standard were Austrians Nico Delle Karth and Niko Resch. They scored a 3, 16, 3, 3 and are really on a roll for the past few events. Having gotten onto the medal podium at the 2016 World championship must have given them a boost of confidence at the perfect time in a quadrennial.

John Pink and Stuart Bithell had a critically impressive day, scoring only 17 points on a four race day when they could not absorb a drop race. They leaped up the standings to be the top British boat and will look forward to staying their for the rest of the week and potentially locking up the British selection.

Nathan Outteridge and Iain Jensen slipped back from their good start to the regatta to be fourth, but just seven points off second.

“There has never been anyone as dominant in the 49er class as Burling and Tuke,” said Jonas Warrer, sitting in 6th overall. “Iker Martinez was great, Chris Draper was great, Nathan Outteridge was great, but these guys are crazy… we would have won the first race but they were racing.”

New crew to the 49er Class and Warrer’s crew, CP Lubeck, just switched over to the 49er class after finishing 8th at the 2016 Nacra World Championship had this to add, “We had the same thing sort of in the Nacra 17, with the French team of Billy Besson and Marie Riou dominating for wins. But this is different, this is crazy, with the French Nacra you could touch them, you could beat them sometimes… this is different.”

How much Burling and Tuke being in the heads of their main competitors makes a difference is hard to know, but they’re always at topic of discussion. Whether it is amazement, observation, discussion, surveillance, or bar talk, how they are doing what they’re doing is the great mystery of the 49er class.

This Europeans represents the last real chance for teams to knock them off in a championship format, and move them somewhat off the mental pedestal. While there are four days to go and plenty of room to stumble, it seems like having someone, anyone, beat them at an event before Rio might be pretty important to the fleet psyche.

Racing continues on day 3 with more qualifying, followed by three days of Gold fleet racing in addition to a medal race on the final day. Gold fleet will have live tracking so tune in at 49er.org to follow the action