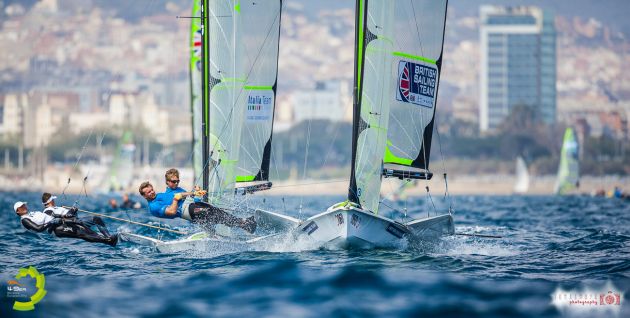 It was a stressful final day of qualifying for the 72 boat 49er fleet, only 25 of whom can make gold fleet. With seven of ten scheduled races completed there were still more than 20 teams on the bubble hoping to sail well enough to keep their hopes alive.

The conditions were a combination of side shore and off shore breeze, which gave fits to the race officers and sailors alike to find suitable racing conditions. After the 9th race of qualifying bubble had shrunk from about 20 teams to eight, only separated by six points with half going to make the gold fleet and half stuck on the outside looking in.

A few teams added solid races to their tallies to ensure they’d be include in the top bunch, getting a chance to relax. None more so that Dylan Fletcher and Alain Sign of the British Sailing Team who must chase hard all week to catch up to their countrymen in order to remain in the conversation about Rio selection. Relegation from Gold fleet could have wiped out their chances, but with a 6th, and 8th, they were up to 16th overall and safe. Poles, Tomasz Januszewski and Jake Nowak who had a 10th, and 1st moved up all the way to 19th.

Feeling the opposite side of the pressure were Tim Elsner and Moritz Klingenberg who with an 18th and 28th were back to 28th overall from 13th, needing a good race to rescue their earlier success.

Unluckily for some, the conditions were too shifty and the final qualifying race was left off the program to allow racing in the 49erFX fleet. Carl Sylvan and Marcus Anjemark of Sweden, on a high from Palma after Sweden took the final Olympic qualifying berth, were left on the outside looking in by only a single point. They lodged a protest for an incident between them and the Poles, POL 52, aiming to get the additional spot up the rankings to make gold fleet, as did Portuguese Olympic bound sailors Jorge Lima and Jose Costa who felt the conditions should have forced the abandonment of the 8th race of the series, a race where they were third from last and that they could not discard due to their previous DNF. The Portuguese duo sit only three points out of the Gold fleet.

The Swedes won their protest, forcing the Poles out of Gold while the Portuguese lost their protest and stay below the line. Check out full results for the final gold fleet line up. The qualifying scenario above is standard fare in the 49er class; the most competitive qualifying series in the world bearing in mind lasers take 60 into their gold fleets. So many great team, so few berths, every point is critical.

At the top, world champions Peter Burling and Blair Tuke (NZL) are in total command with six wins from nine races. Their tally of 11 points after dropping a sixth sees them 24 ahead of Olympic Champions Nathan Outteridge and Iain Jensen (AUS) who are tied with Brits John Pink and Stuart Bithell on 35.

Things were intense for the 49erFX racing, but for different reasons. The conditions got windier but just as shifty and incredibly puffy. Only two races were able to be held after three hours on the water, with few teams making it through the day without any capsizes. Giulia Conti and Francesca Clapcich remain in the lead but moving up to second with the best day on the water were Argentinian’s Vicky Travascio and Sol Branz. The Argies have been doing really well in the breeze for the past few months and continued that trend in qualifying this week.

Teams got back to shore and with only two races completed had enough energy to share their wilder capsizing tales. American Olympians Paris Henken and Helena Scutt managed to back wheelie their skiff while fighting to rescue a capsize. Others told of making it around the forestay and taking leaps downwind off the swell headed in the wrong direction, typical skiff shore sharing.

The format for the 49erFX is a bit different due to the small fleet size. All 36 teams will now proceed to gold fleet from the 18 boat qualifiers, which means that the meaty part of the regatta is on its way. There are only 12 points separating the top nine teams, so the race for the championship truly begins with gold fleet.

Tess Lloyd and Caitlin Elks look a step closer to Olympic selection as they sit just outside the medal race top 10. They are putting together a good regatta with only two races where their score is in double figures and both of those were 10th places. Main rivals Olivia Price and Eliza Stolly are down in 22nd, 34 points behind. A UFD and DNF has not helped the cause of Haylee Outteridge and Nina Curtis who are now 26th, 15 points behind Price and Stolly.

Gold fleet will race for the final three days, 25 boats in 49er, 36 boats in the 49erFX. The 49er Silver fleet will be split into two equal fleets who will continue to race on an equal footing for places 26 through 72.