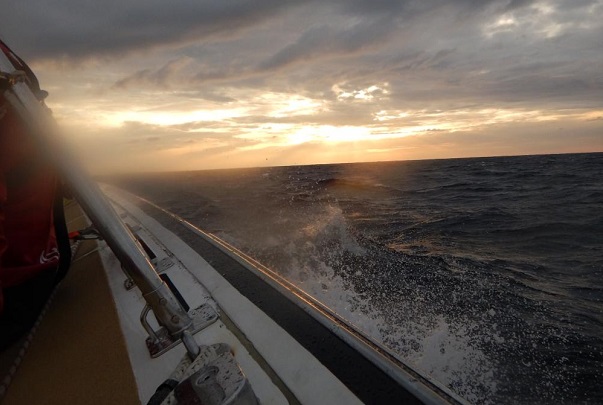 The podium positions for Race 9, The Seattle Pacific Challenge are now confirmed. However this race is far from over for the remaining eight contenders who have plenty left to race for while Mother Nature continues to exercise her might, throwing up another harsh storm overnight with more towering waves and gusts over 70 knots.

Derry~Londonderry~Doire secured its race win hat trick and is due to arrive into Seattle later today. Unicef recorded its first ever podium position after the team finished second in the early hours of today, ahead of its long term rival throughout this race, third placed LMAX Exchange. GREAT Britain crossed the finish line at 1127 UTC to take fourth.

Putting the entire race into perspective, Unicef Skipper Martin Clough says: “Well a 'phew' hours ago we finished a 5000+ nautical mile match race lasting 25 days. Intense racing in the most challenging conditions and sea states I have ever come across in 24 years of sail training.”

The fleet experienced yet more heavy weather overnight, though this is now subsiding and predicted to lighten further today.

ClipperTelemed+ Skipper Matt Mitchell, whose team is 68NM from the finish, still working hard and aiming to cross the line in fifth place, says: “The North Pacific had one more trick up its sleeve. A strong front passed over us overnight last night which brought very strong gusts into the 90s, towering seas and harsh conditions. We were forced to ride with it. In light of some of the stories from the other boats this leg I had no wish to have the same happen to us so thought it best to ride with it, even though it meant being 40 degrees off course.

“It's all change now though as we are crawling along at 5 knots, praying that the wind holds for the last 80 miles to the finish line. We are definitely being made to work for our beer now.”

Skipper Ash Skett of sixth placed Garmin, just 25NM behind, tells a similar story. He reports: “Another night, another severe storm as the wind built to a violent 60 knots with even stronger gusts. The crew worked hard, the Yankee had to come down in some really rough weather but they managed it well. The helms also did a great job, managing to keep the boat steady in a very challenging sea.”

Less than 20 nautical miles behind Garmin is seventh placed Mission Performance. Never one to give up, Skipper Greg Miller is staying positive and focused on the final stretch. He says: “We are still pushing hard to try to catch Garmin, which is the only boat in the fleet that we haven't beaten in any of the races! Touch wood and not counting our chickens, we have come off fairly lightly and been very lucky so far but it’s not over yet…”

It is now highly unlikely that eighth place Qingdao will overtake anyone or indeed be overtaken themselves, as it is now over 200NM behind seventh, and almost 200NM ahead of ninth placed Visit Seattle.

However the same safety is not yet true for the American home team. Tenth placed PSP Logistics may be 50NM behind Visit Seattle but with over 500 nautical miles remaining, this is one battle which could still go the distance.

Skipper Max Stunell warns: “With about one Sydney to Hobart to go we are starting to feel as though we are on the home stretch of this marathon. We have clawed back some ground on Visit Seattle so the next few days are going to be exciting as we may cross paths once again with our old foe.”

Eleventh placed IchorCoal will require a mighty comeback to make up the 200 miles it requires to catch PSP Logistics, though the team has always said it would race conservatively following the tragic loss of Sarah Young.

Da Nang – Viet Nam may be retired from this race but Skipper Wendo Tuck reports the team is still sailing and keeping upbeat in the final stretch to port.

Despite best efforts by the rest of the fleet Garmin looks likely to hold onto its Ocean Sprint record of 20 hours 39 minutes, which will be some compensation for a tough result having led the race for so long in the early stages.

Stay tuned to the website and Periscope App for arrival news and pictures as the podium teams arrive to port at Bell Harbor Marina. The latest ETAs into Seattle will be updated regularly here.

All positions correct as of 1000 UTC.

**IchorCoal’s Darren Ladd has announced he will stand down from his position as Skipper when the team arrives into Seattle, following the tragic events of this race. Read the full statement here and feel free to leave your comments on the Facebook announcement, which we will pass on to him as the team continues into port.