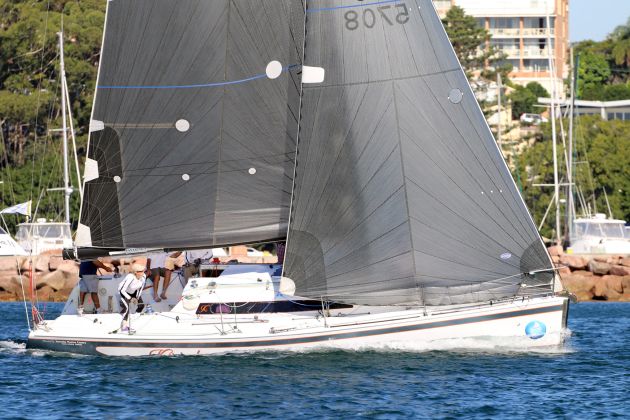 Day one of the Commodore’s Cup at Sail Port Stephens proved an idyllic shakedown for the record fleet of 52 yachts varying in size and design, 13 – 16 knots of SSE breeze and loads of warm autumn sunshine to break the regatta seal for the ninth time.

Two divisions lined up for the islands course that began off Nelson Bay marina break wall, creating a spectacular sight for diners at the many foreshore seafood eateries, then out around three uninhabited islands in choppy conditions and more breeze than anticipated and back to the finish against the ripping tide.

Making the most of the long reaching legs to finish first in division 1 was Steve Connors’ Jones 39 Arch Rival from Sydney over Bob Steel’s Mat 1180 Quest and Mark Skelton’s Beneteau 40.7 Jab from Newcastle.

Division 2 handicap honours went to Robert Carr and Kerry Burke’s Northshore 370 MortgageChoice Rumba from Middle Harbour Yacht Club. “We had amazing conditions… up to 20 knots around the figure of eight islands course,” said Burke. “We did everything right; first across the line, we picked the angle around the islands and managed the twist in the breeze around Flying Fish Point and had great boat speed to the line. It’s our first time at Sail Port Stephens with the boat and we are really enjoying the hospitality.”

“It was a good day out around the islands; we finished up with a lot more breeze and the outgoing tide made it fun coming back in.” The Royal Motor Yacht Club Toronto member is happy to bring his boat north year to year. “This is our fourth time. It’s handy, just up from Lake Macquarie and the sailing is competitive and the atmosphere is good. We have a good time, we don’t care about results.”

“The week is a test match, a marathon, not a 20-20 game,” race officer Denis Thompson reflected at the end of day one, Monday April 11, prior to this evening’s official welcome function at The Anchorage.

Day one video thanks to Hover UAV