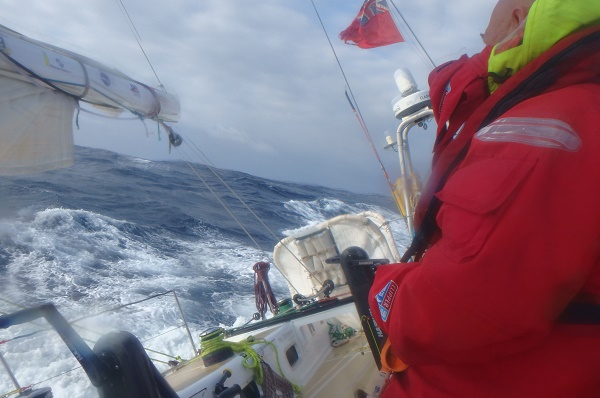 Damp and gusty downwind conditions, with up to 50 knot peaks, are continuing to push the teams forward in the race to Seattle. With boat speeds in the high teens, and surfs well into the 20 knot range, impressive 24 hour progress milestones are being recorded across the fleet.

Maintaining its lead position, Derry~Londonderry~Doire Skipper Daniel Smith reports: “The forecast high winds are upon us now but the favourable direction means that instead of making the sailing a fight, it has pushed the boat forwards towards our final waypoint nicely. Speeds are in the teens with occasional long surfs into the high teens and maximums in the low 20s.”

The Northern Irish entry is not banking its third consecutive race win yet however as Skipper Daniel adds: “We are watching the pack of Clipper 70s behind us closely as they are also making impressive speeds. With just under 1500 nautical miles to go to the finish line we are having to work hard to maintain our lead. We won't be able relax until we cross the line and there are still a lot of miles left in this race.”

The chasing pack now consists of LMAX Exchange in second, 96 miles behind the leader, having stalked and now overtaken Unicef within the past hour of racing, and less than half a mile currently separating the two rivals. ClipperTelemed+ is fourth and GREAT Britain is fifth, with just 30 nautical miles separating these four teams after more than 3,000 nautical miles of racing.

Mission Performance Skipper Greg Miller, in seventh position and striving to close on sixth place Garmin, just 3nM ahead, notes: “Between 1600 boat time yesterday and 1600 boat time today we have travelled our first 300 nautical mile milestone. But that is not all! The mileage is VMG (Velocity Made Good) mileage, which means we have made just over 300 nautical miles towards the destination. This is a big thing.”

ClipperTelemed+ Skipper Matt Mitchell explains his team’s progress, which is turning into its highest maintained position of the series so far, saying: “Well we are certainly going fast. The wind has been up in the high 30s for the majority of the day with gusts up to 50, waves breaking over the boat and generally just quite unpleasant. It seems the front is well and truly on us. Fingers crossed now it's here that it will pass by quite quickly. It should bring a wind shift and less gusty conditions, however the mean wind speed is still set to stay quite high.”

Painting quite a dramatic picture of what it is like on deck in these conditions, GREAT Britain Skipper Peter Thornton reports: “Surfing these tough built 70s in these conditions is a mix of tough counter-helming to stop her diving too deep or rounding up, and conversely when she's on track in between waves, it’s touch control as she's light as a feather. You're simply flying her. The sea becomes split by the bow fully out the water, rising up and taking off. The bow waves roar back on both sides, bouncing off stanchions and shrouds on the low side, and engulfing the deck with white sea spray you've from the windward side. It's difficult to really get the full picture at home I guess, but let’s just say you’ve got to concentrate when helming.”

In the back half of the fleet, Qingdao is eighth, PSP Logistics is ninth, Visit Seattle is tenth, Da Nang – Viet Nam is eleventh, and IchorCoal is twelfth.

With the current front still moving over the back half of the fleet, and another weather system forming ahead of the leaders, the forecast suggests that the wet and windy conditions are set to continue and perhaps increase on the way to the Ocean Sprint, which is around 630 nautical miles ahead of Derry~Londonderry~Doire.

Good news however is that, while the temperatures are still very cold on board, Skippers report that they are rising slowly and will continue to do so as the Western USA coast line draws closer.