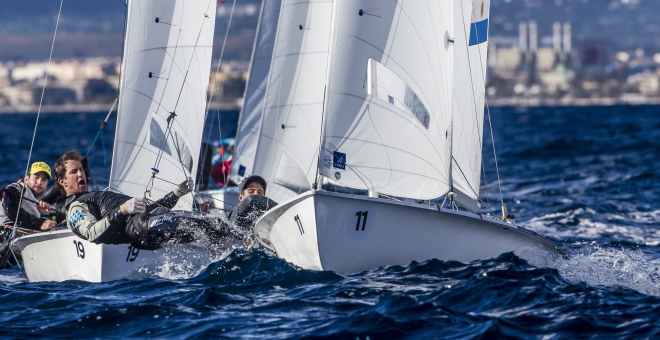 Sailors had to pay intense attention to the shifts on the race track in a tactical situation that was tough. Miss a shift and it was easy to lose your rhythm.

The qualification series was completed on the Bay of Palma, Mallorca, today, for the 470 Men and Women. The men took it a stage further, and contested the first race of the 6-race gold and silver fleet final series.

No let-up in the performance of Lara Vadlau/Jola Ogar who hold tight to the 470 Women lead and rack up three more top ten finishes. In the 470 Men, Lucas Calarese/Juan De La Fuente opened the day in the lead, lost it, and recovered to reclaim the yellow leader bibs for tomorrow.

470 WOMEN
Consistency pays, and Austria’s Lara Vadlau/Jola Ogar remain the only team in the 470 Women lead board to count all top ten finishes, today adding scores of 3,9,2 to their two race wins.

2016 470 World Champions, Camille Lecointre/Helene Defrance stepped-up their game in harmony with the improvement in weather, knocking out a comprehensive display of skill and finesse to win races 3 and 4 in the yellow fleet, leapfrogging into fourth overall.

“We feel much better,” laughed Lecointre. “We had a pretty hard first day and were not in a good place with the race and wind shifts. Today we were really careful to prepare very well the race and it was good.”

“In my opinion we came a bit late to this regatta for many reasons and we didn’t prepare so well as the other teams. We didn’t sail Trofeo Sofia or any races here so maybe we were a bit away. We feel like now we are back in the racing.”

Taking a walk around the boat park, you discover a huge array of boat names adorning the sterns of the 470s. The 470 of third placed Dutch pair, Afrodite Kyrankaou/Anneloes Van Veen is christened with Greek names in tribute to Kyranakou’s heritage.

“One name is ‘Knowing Yourself’, taken from the Temple of Apollo at Delphi, a very sacred place in ancient Greece,” explained Kyranakou. “And the other and most important is ‘It’s the battle that counts’, which is also part of ancient Greek philosophy.”

Claiming scores of 4,2,4, the pair were clearly guided around the track by these missives today.

“It was a tough day and we made some mistakes,” commented Van Veen. “It was really tricky and I had to see a lot outside the boat and make good choices on the tactics and also be really fast. We managed to do that quite well and also in the downwind catch up some places. A good day.”

On their upcoming Olympic appearance, Van Veen continued, “It is amazing of course and we have been training so hard for this since four years. We had a lot of catching up to do compared to the rest of the fleet. Most of the teams already have experience in one or two Olympics, but it is going to be amazing for sure.”

In the charge for selection amongst Spain’s Olympic campaigners, Marina Gallego/Fatima Reyes steamed to victory in race 3, jumping up to third overall. Their gain was short lived, slipping back to tenth after a 12th place in the third race of the day. Still leading the Spanish charge are the young pairing Silvia Mas/Paula Barcelo in 7th overall.

A nail biting tiebreak decided the top twenty-nine teams making the gold fleet cut, and most likely marking the end of the Road to Rio for some. Three teams on the cusp of gold fleet scored 50 points each, with Switzerland’s Linda Fahrni/Maja Siegenthaler securing the last place in 29th, based on their win in race 2. For Australia’s Sasha Ryan/Ella Clark and Spain’s Angela Pumareiga/Patricia Cantero, a place in the silver fleet most likely brings their Rio 2016 campaign to a close.

“This is totally different compared to London 2012, particularly as I am now the skipper which is a big change,” said Pumareiga. With one 2012 Olympic Gold medal to her credit in the women’s match event, Pumariega switched class and turned her skills to helming.

“I think we have improved a lot in the three and a half years, so I am happy with this. The 470 is a very competitive fleet, so it is different to my previous campaign, and we are still new to the Class.”

470 MEN
Going into the day, Lucas Calabrese/Juan De la Fuente (ARG) held the lead by 1 point over the next three teams a tiebreak 4 points apiece. With the qualification series wrapped up two races later, it was Anton Dahlberg/Fredrik Bergstrom in the yellow leader bibs, the Argentineans in second, and 2016 470 World Champions Sime Fantela/Igor Marenic (CRO) up into third.

Leading the charge going into final series racing is a strong position to be in, but as Bergstrom said, “The regatta actually starts now as this is the time when the points start to get higher and higher.”

“It is always good to start a regatta with a good result and I think we have a good feeling in the boat and our speed and technique and our race management against other boats is so far so good. But the regatta is long and the Olympics will be many races as well, so we just need to keep up for a few more days. I am happy to be in the position we are in.”

“Immediately I raced the 470 I wanted to do an Olympic campaign. Back in 2009 I thought I was going to win the 470 Worlds as I thought I was a good sailor, but then I realized there is a completely different level to going to the Olympics and that really encouraged me to continue and fight for it. I was super happy to find Anton in 2012 and start sailing with him and have enjoyed every moment in the boat. It is fun!”

Reflecting on the hardest part of Olympic campaigning, he continued, “To get everything together. There are so many small details which you should focus on and like you can easily take one step to the right when you should have gone to the left. Not on the race course, but on your whole programme. Trying to gather everything and get a nice programme is really key for success.

“It is really something, I was really happy,“ added Bergstrom recounting his Olympic selection confirmation. “I was super happy, but still back then and now every day for the Olympics now is counting. And you need to take one day each step and it is super important not to look that much into the future and be in the moment and perform as best you can at the moment.”

With Bergstrom’s place in Rio confirmed, he is now gunning that brother Victor whom is racing at the 49er Europeans next week in Barcelona, will secure his place in Sweden’s Olympic team line-up.

After completing the qualification series, the fleet headed ashore for any protests to be dealt with and were then seeded into 35 boat gold and 34 boat silver fleets, before heading back to the race track for the first final series race. With all the top teams now facing off in one fleet, the racing inevitably gets tighter and we can expect to see higher scorelines.

The gold fleet race got underway in a shifty breeze, which saw many of the frontrunners opting for the seemingly favoured left side, only to stumble. Amongst those falling foul was Spain’s Jordi Xammar/Joan Herp, racking up a 28th.

“We had a good start, and I think everyone wanted to go to the left because all the good guys were there,” Xammar explained. “But the right paid a lot. It was a race that most guys who had a bad start tacked to the right to look for more options and gained. But this is racing, it is like this.”

Reflecting on the advantage they have over Onan Barreiros/Juan Curbelo in national selection battle, which currently positions them 17 places ahead on the leader board, he commented, “Now there are 5 races to go and still a lot can happen. I am ready and calm.”

Recently crowned 2016 470 World Champions Sime Fantela/Igor Marenic are renowned for rock steady performances, and added two third places to their scorecard today, followed by a 25th in race 6 to sit in 6th overall. Fantela, a former Optimist World Champion, took a moment to reflect on his career in sailing

“It wasn’t something I thought about,” he responded, when asked about his childhood sailing ambitions. “It was a long time ago I won the Optimist Worlds, back in 2000. I was a happy kid in the Optimist enjoying my time. I am glad that a little bit of that joy stayed in with me, which is why I am here. I am still a happy kid, let’s put it that way!”Fantela joked. “I still enjoy sailing. Of course there are tough times and tough days, but our results show that at the end of the tunnel is always the answer to why we do this.”