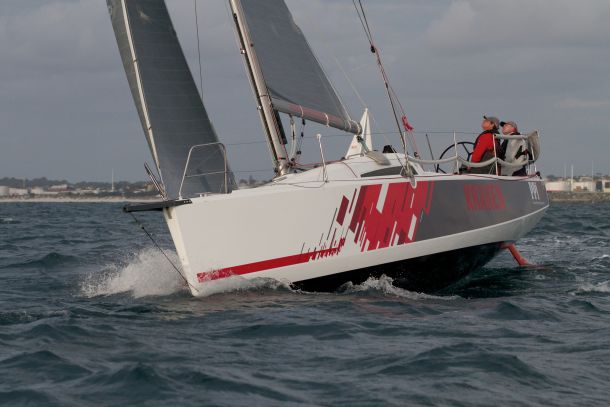 Royal Perth Yacht Club’s Iberia Race is the feeder race for Geographe Bay Race Week, starting at Fremantle in the twilight hours and finishing in Busselton.

A moderate sailing breeze from the south west, under a blanket of low cloud highlighted by the setting sun, gave competitors a nice easy start as they headed to sea. Conditions freshened as the fleet worked its way south, until between 2 and 3am, when it dropped momentarily and kicked back in at 35 knots plus, coming straight from the Busselton Jetty.

“We were a bit lucky when the change came, because we had almost reached Bunbury,” said Calm skipper Andrew Harry, “but it was hard work tacking all the way to the finish.”

Laurie Flynne’s Dynamic hit the change near Mandurah, and along with all the yachts around her, sailed in wet, cool and windy conditions for more than half the length of the journey.

Calm took line honours in a little over 12 hours. “Eight hours to get to Bunbury and four hours of belting into headwinds to the finish,” lamented Andrew Harry. He need not have worried because Calm won IRC by a whopping 33 minutes ahead of the Ker 39 ME II sailed by Peter Hickson. Anthony Kirke’s Farr 40 Enterprise was third.

Tony Carter’s Just Cruisin’ shot out of the blocks at the start and went on to win the Division 2 treble – line honours, IRC and YAH. Peter Vlaar’s modified Farr 2 tonner Farrago was second on both handicaps after a very loud slanging match on the start line where Farrago squeezed Sand Crab’s Disco out at the boat end. Nexus was third on IRC and Fourth Dimension was third on YAH.

David “Dubbo” White wondered what all the fuss was about when he was asked about the weather conditions. With the experience of a Sydney Hobart race to draw on, Todd Giraudo’s new Jeanneau 3600 handled the conditions easily with her two man crew and finished more than half an hour ahead of the much larger Farrago.