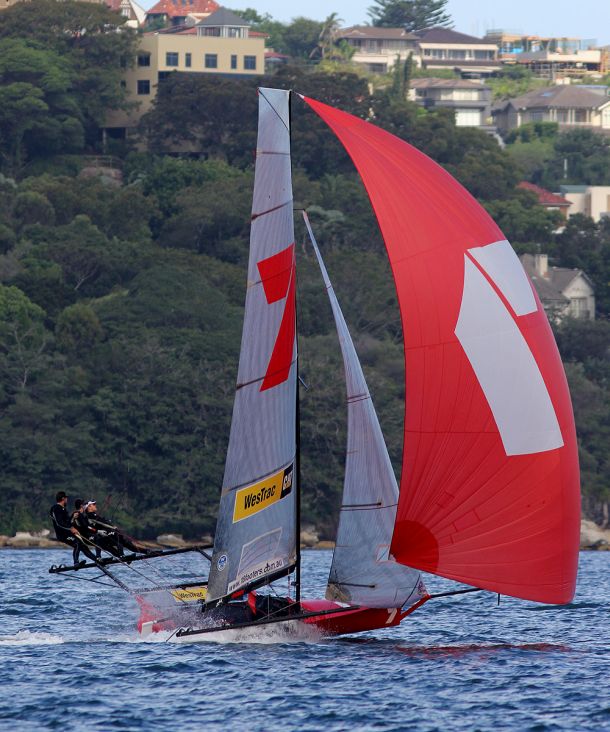 The defending champion Gotta Love It 7 team has done it again, and certainly set up the chance to make it a sixth consecutive JJ Giltinan 18ft Skiff Championship. Seve Jarvin, Sam Newton and Scott Babbage raced to an early lead then saw it disappear during incredibly flukey conditions, but came back strongly to win Race 2 of the regatta on Sydney Harbour today. Team Seven won by 52s. from Yandoo with Thurlow Fisher Lawyers just 6s. further back in third place.

Gotta Love It 7 has a total of two points, followed by Thurlow Fisher Lawyers on 11, Asko Appliances (Marcus Ashley-Jones) 12, Harken (Howie Hamlin, USA) on 14, Lumix (Jonathan Whitty and The Kitchen Maker (John Sweeny) both on 19.

After leading by 2½ mins at the first wing mark, Gotta Love It 7 looked set to have the race at her mercy as the rest of the fleet struggled to find wind as they sailed into Rose Bay.

The 2000 Giltinan champion John Winning, along with his Yandoo teammates Andrew Hay and Jim Beck, then produced the move of the day as they grabbed a 55secs lead over the Seven team at the bottom mark off Clarke Island.

De’Longhi was in second place at the first windward mark and stayed with Seven and Yandoo downwind through the wind shifts to be still third at the bottom mark.

Conditions were remarkable and turned the placings upside down as the wind went to a variety of diections and dropped away to near nothing.

Yandoo stood into Taylor Bay on the following windward leg while the Gotta Love It 7 team elected to stay in the middle of the harbour.

Team Seven lead narrowly when the two skiffs met off the north of Shark Island, but Yandoo came back to regain the lead at the next cross off Rose Bay.

Yandoo’s team elected to go to the right hand side of the course and stood in close to Nielsen Park Beach.

It gave Gotta Love It 7 just enough room to lead by less than 10secs. when spinnakers were set after the pair went around the windward Beashel Buoy.

Although the yandoo team tried hard, the Seven crew were again superb as they shut the door and went on to a clear cut victory.

For race results go to www.18footers.com.