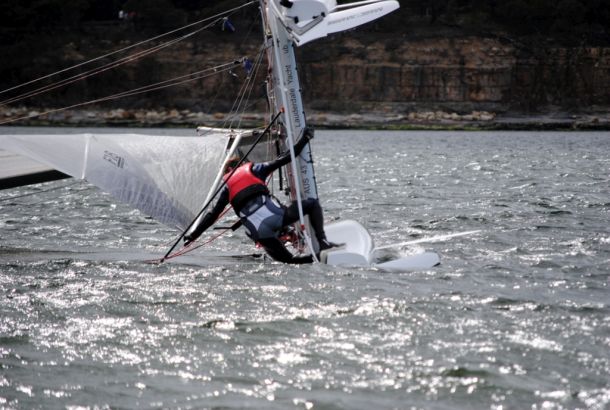 The crew go for a dive as Wicked capsizes on the Derwent. Photo Peter Campbell.

Tasmania’s champion one-design sailors this weekend have shown the skills that makes them the best in the State, scoring overall wins in the Crown Series Bellerive Regatta which ended on the River Derwent yesterday in excellent sailing conditions compared with the wet and windless Saturday sailing.

Nick Rogers won the SB20 sports boat class, steering Karabos to four wins, two seconds and a third in a highly competitive fleet of 14 boats. He also was awarded the Don Rust Memorial Trophy for the best overall performance of the three-day regatta.

London Paralympic Games sailor and likely Rio 2016 representative Matt Bugg won the International 2.4mR class, by just one point as local competition in the class expands with the open world championship to be sailed in Hobart next January.

Former Australian champion Mark Latham sailed his Sharpie, One Hump or Two, to win his class with four wins out of six races. There is a revival of interest in the iconic senior centreboard class with the nationals on the Derwent in 2016.

International Cadet sailors Angus Price and Archer Ibbott, who have been chosen in the Australian team for the world championship on Lake Garda, Italy, later in the year, won their class with a consistent score that included two wins, two seconds, a third and a fourth.

Another outstanding result came from Rupert Hamilton who won five of the six races in the Optimist class, placing third in the other race while up-and-coming Sabot sailor Fraser Marshall had four wins (one a dead-heat). Overall placings went to Ethan Galbraith and Charles Zeeman.

Nick Rogers’ performance in the SB20s augers well for his prospects in the Tasmanian and Australian championships to be held on the Derwent from March 4-9.

After winning all three races on Saturday, he had to be content with a 1-3-2-2 score yesterday, but it gave Karabos first prize by a clear ten points from Cunic Homes (Brett Cooper), third place going to Ronald Young Builders (Scott Brain), closely followed by Balios (Matthew Pilkington). Cunic Homes won two races yesterday while Balios and Karabos were the other winners on day two of the regatta.

The annual ‘world championship’ for the Mumm 36 saw victory for TasPaints over Host Plus Executive with the third Mumm 36, Madness, forced to withdraw with a damaged rudder.

It Happens, skippered by Mick Souter from Kettering Yacht Club, sailed a most consistent series to win Performance Cruising 1 PHS from Fine Cotton (Gavin Adamson) and The Protagonist (Stuart Denny) while under AMS scoring victory went to Prion (Rod Viney) from The Protagonist) and Nexedge (John Mills).

Gary Cripps, the major sponsor of the Banjos Shoreline Crown Series Bellerive Regatta, won the last race under PHS scoring with his Sydney 38 Ciao Baby II, a win which received great applause at the prize giving.

In winning Performance Cruising 2, Piers and Sarah Findlay’s Smooth Cha Cha had an excellent scorecard of 1-2-1-2-1 for 7 points, with the next boat, Mischief (Kif Weber) on 22 points. Third place went Magnum (Colin Gray) on 24 points.