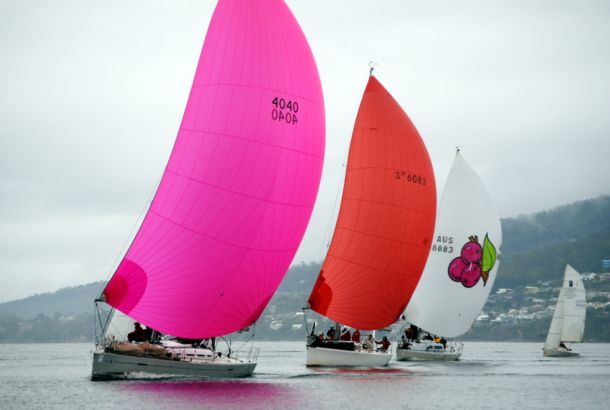 War Games may the last Farr 40 still racing regularly on the Derwent, but prominent owner Wayne Banks-Smith is obviously keeping her competitive, today scoring a double win in Racing Group 1 on a wet and largely windless second day of the Crown Series Bellerive Regatta on Hobart’s River Derwent.

After two races, one on Friday evening, one today, War Games and Tony Lyall’s TP52 Cougar II are equal on 5 points under PHS corrected times, each scoring a win and a fourth place.

War Games also won the IRC category of yesterday’s race, but overall Cougar II leads by one point going into today’s third day of the regatta.

The two racing divisions sailed only one race with competition delayed for at least two hours for all classes, keelboats and off-the-beach boats, when a light southerly moved up the river, enabling Bellerive Yacht Club race officers to conduct two or three races for other classes.

The forecast is for less rain and lots more wind, a 10-20 knot nor’easter that should enable race officers to complete the Banjos Shoreline-sponsored regatta with up to three more races for each group.

Competition is close in the Racing 1 group with War Games and Cougar II on 5 points in the PHS category after Friday’s twilight race and yesterday’s one long race, followed by X&Y (Toby Richardson) and TasPaints (Ian Stewart) both on 7 points, and Host Plus Executive (Jeff Cordell) and Invincible (Harold Clark) with 9 points each.

Cougar II heads the IRC leader board with 3 points from War Games on 4 points and Host Plus Executive on 6 points. Host Plus, with two second places, is leading under AMS scoring, just two points clear of Mumm 36 rival TasPaints.

The SB20s are using the Banjos Shoreline Crown Series Bellerive Regatta as a ‘dress rehearsal’ for the class state and national championship early next month, with Nick Rogers steering Karabos to victory in all three races.

The former world champion in the International Dragon class is eight points clear of his next rival, current state champion Scott Brain, sailing Ronald Young Builders who had placings of 2-3-6, while third overall is Wicked (Andrew Blakney) who scored 7-4-4.

Just two points astern were Nautilus Marine (Hughie Lewis) with 9-8-2 score and Balios (Matthew Pilkington) with a 4-6-9 score in the 14 boat fleet.