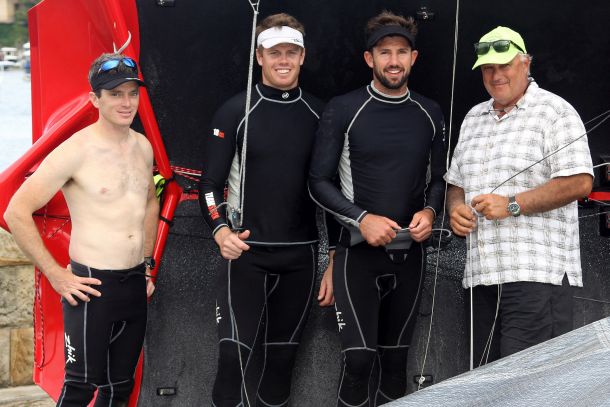 The 2015 JJ Giltinan 18ft Skiff Championship got under way today when the 24-boat fleet lined up on Sydney Harbour for the traditional Invitation Race to welcome the visiting competitors.

The defending champion Gotta Love It 7 team of Seve Jarvin, Sam Newton and Scott Babbage, revelled in the light ESE breeze, around 8 knots, to lead throughout the race and win by 1m7s from the NSW champion Thurlow Fisher Lawyers team of Michael Coxon, Trent Barnabas and  Dave O’Connor.

The championship racing begins tomorrow and concludes on Sunday 22 February. The club’s regular ferry will follow the racing, leaving Double Bay Wharf, alongside the clubhouse.

NOTE ALSO:  There will be two spectator Ferries on Sundays 15 and 22 February