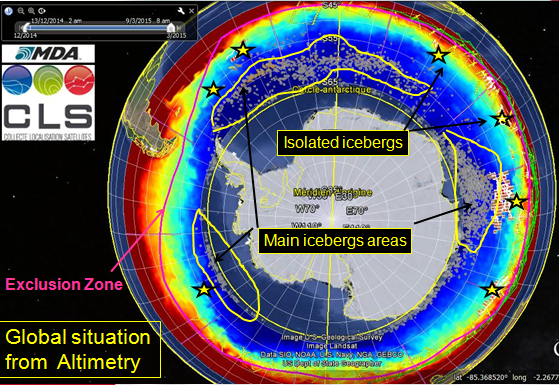 The Barcelona World Race and the competing skippers are playing an important role in one aspect of the monitoring of climate change.

Ice is now seen more frequently and more accurately when it breaks away from the Antarctic ice cap and as it drifts into the areas which have been the traditional southern oceans routes for round the world races. As a consequence it is vital for the absolute safety of the crews that the positions and movement of ice is tracked and the racing area restricted to avoid danger to the crews.

In fact this comprehensive, accurate level of tracking is done almost exclusively for the Barcelona World Race and other round the world races, but over time this level of tracking will deliver a direct benefit to scientific research.
Proof of climate change is hard to measure, but even in the Furious 50s and Roaring 40s latitudes Barcelona World Race duos have recently been experiencing warm, sunny interludes.

“We are enjoying our summer holiday in the Southern Ocean” quipped Spirit of Hungary's Conrad Colman a couple of days ago, basking in sunshine and temperatures akin to summer in northern Europe. At 50 degrees south today Anna Corbella on GAES Centros Auditivos today reflected on a sunny, almost warm respite from the usual cold weather. Renault Captur's Jorg Riechers and Sébastien Audigane were sailing in short and t-shirts in the Roaring 40s a few days ago.

Such intermissions become part of anecdotal evidence but it is the round the world race's safety requirement for in-depth study of iceberg detection and the circulation and drift patterns that will help scientists understand the evolution of climate change.

It was Ice Day at the Barcelona World Race HQ today. In the media studio were Franck Mercier (FRA) of CLS, the organisation which is charged with the actual ice tracking, and Marcel van Triest (NED) who coordinates the safety zone in collaboration with Race Direction. He serves as the race meteorolgist.

Van Triest explained: “Now we know there are large pieces of ice floating in the ocean as it warms up and Antarctic ice is melting and breaking”.

The most immediate recent example are the icebergs which are near the Crozet Islands, quite north of usual expectations. A few days ago One Planet One Ocean Pharmaton were sailing within 70 miles of three or four big icebergs. They were alerted to the exact positions by Race Direction. Aleix Gelabert recalled:

This race has opted for an exclusion zone rather than ice gates. Speaking today he highlighted how difficult it can be to avoid ice van Triest said:

“If you sail at 10 m/s speed and see an iceberg 200 m away from you, you have only 20 seconds to maneuver, that’s nothing. That’s why we have an exclusion zone, a prohibited zone. It's better than ice gates. In my first round the world race there were no ice limits, we went down to latitudes 60ºS and 61ºS. Today the technology to detect the ice exists, so we control it, we just can’t send people down there knowing what we know.”

“With the exclusion zone it gives more control and security. We can go closer to where we know there is ice, like we have done with the icebergs which were at the north of Crozet islands. And the limit can be set more to the South than with the ice gates. Down there there is of course more wind and the route is shorter.”

It may seem remarkable that ocean races like the Barcelona World Race are almost alone in pushing forwards the study of floating ice detection and its tracking. Van Triest highlights: “Ocean racing commissions do 90% of ice detection work. And this work has really only been going on for 15 years.”

Also as part of the Barcelona World Race's drive to propagate scientific understanding, the Argo beacons which were launched recently are already providing interesting information. The one which Neutrogena launched is at 44 deg S and shows a surface sea temperature of 12 Deg. Cheminées Poujoulat's is at 43 Deg South showing a sea temp of 17 Deg.

Meantime, asked if this is a year of moderate conditions in the Big South for the fleet, both Van Triest and Mercier chorused: “….for the moment….”

In the Dock, In The Race

In Bluff by Invercargill, South Island New Zealand, repairs to Neutrogena's failed charging system are reported to be on schedule. Skippers Guillermo Altadill and José Munoz are described as having a good night's sleep in readiness for their departure which the team believe will be at 0522hrs UTC Saturday morning as per the mandatory minimum 24 hours duration.

Race leaders Cheminées Poujoulat were taking some brief respite in lighter airs today and expect more of the same tomorrow. Jean Le Cam and Bernard Stamm are now nearly 800 miles ahead of the pit-stopped Neutrogena. In turn GAES Centros Auditivos have reduced their deficit to Neutrogena from 1100 miles to 657 miles.

Anna Corbella (ESP) GAES Centros Auditivos: “We are pushing as hard as we can. It is not easy to push harder. But if we have any opportunity to catch Neutrogena then we take it. At the moment we feel safe. We did not see any ice. I hope it will continue like this. I think it is safe. I feel confident with the people in the people working on it and I think it is working. I don't know which system I would prefer, I dont know whether ice gates or the exclusion zone is better. For the moment the exclusion zone for us is not very good. We had some problems in the Indian Ocean because of it. I dont know which I prefer.”

Jean Le Cam, FRA, Cheminées Poujoulat: “The atmosphere on board has changed a bit. After a week when it was hard to do anything less than 19kts average it is quieter again and we are under spinnaker. It is not really that nice but at least the boat is going forwards and it is not slamming. You can drink a coffee quietly and rest. We will make the big general check of the boat tomorrow. It is good.

“We go as fast and best we can. We are in the rhythym and try not to break it. We route by our weather options and so nothing changes for us. Yes we are comfortable now, that is clear. And it is good. But you still have to stay on it all the time, because no one is immune to a technical problem. Tomorrow we will take full advantage of a little time to make a general check of everything. Neutrogena will get going and it is true we will have a little advance, you can say we are comfortably off. But, hey, we are not immune to shit happening.”

“Yes, pfff, no … On Friday 13 you can take it both ways. So I will take it in the right way. Friday the 13th is called a lucky day. It always reminds me of the boat Yvon Fauconnier, Friday 13. Come on, let's say it's a lucky day!”

“For me, it's a real border. The numbers are decreasing now and that means we are closer. You see, I'm at 173 ° 29 West, and the numbers decrease more, so the closer you get. It is a sign of reconciliation and not a sign of remoteness. It is in the phase of the course when you really start to feel you are going towards the finish.”