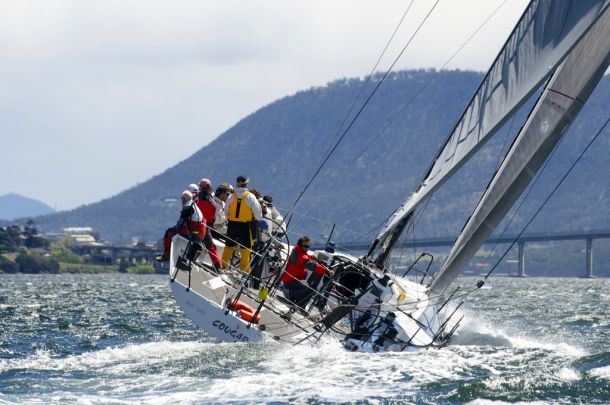 Racing for the keelboats, both in the racing and cruising groups, starts with a twilight race on this evening, continuing with back-to-back racing on Saturday and Sunday.

Footloose, a Young 88, is also an entry for the Crown Series, in Group 2 as is Silicon Ship, Gordon Clark and David Wyatt’s Knoop 32 which last Monday won the Centenary race for the Sir Thomas Lipton Trophy at the Royal Hobart Regatta.

“You are right that its tongue in cheek event, but for all of us winning the Cup is probably the highest priority for all of us,” Jeff Cordell said today.

“Last year, with the addition of Gavin Adamson/Jenene Frawley’s Madness, we each went into the final race with twp wins each. Luckily for us, we pipped Madness in the final 200 metres of the race.

“The racing is so close that’s what it comes down to. The Tas Paints and Madness crews are really good sailors and you can never relax when you’re ahead, and you can count on them to make it very hard to pass them if you find yourself astern.

“The best part, for sure, is the friendships that have come from this rivalry. We’re usually found having a beer together after the racings done!” Cordell added.

In addition to keelboats, racing and cruising, the Banjos Shoreline Crown Series Bellerive Regatta has attracted a fleet of 14 SB20 in what will be a ‘dress rehearsal’ for the class’ upcoming state and national championships on the Derwent.