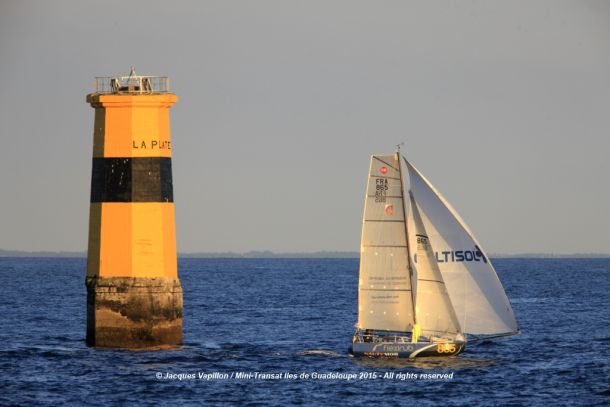 The flapping of the sails has been replaced by a far sweeter music: that of the hull starting to swish through a calm sea. It’s a privileged moment for the sailors: it marks the end of a time of doubt and nervous tension whilst the sails flapped and we asked ourselves if the competitors, already out of view, were in the process of playing the wind currents. The wind should now blow increasingly strongly from the northwest before it backs to the northern sector.

The first night of the race has not been easy for the Mini Transat îles de Guadeloupe solo sailors.  In light conditions or in practically no wind, the competitors tried as best they could to make progress, to keep their boats moving and to keep up the leading positions. Some, foreseeing the wind veering to the North West, attempted a radical route, keeping well above the course to the West.

Conversely, others sought a more Western route, with the aim of gaining a little ground. This option for now looks like it has paid off best because those furthest north have between 10 and 15-mile deficit on the fleet leaders.

Franco-American sailor Andy Abel (Pepen) currently is ahead in the production build fleet, whilst Davy Beaudart (Flexirub) leads on the Prototypes. The skipper on the Raison Design boat chose a great option which should see him, considering the reaching conditions ahead, build a bigger lead in the coming hours.

There is always the other side of the coin when it comes to sailing. Feedback from the sailors on their first night at sea, when contacted from the French Naval Ship PSP Flamant, is that conditions have been light. Whilst keeping an eye out for any little bit of wind, most of the sailors reported having managed to make the most of the light breeze to get some rest before the stronger downwind sailing conditions come in. The tension built up before the start gave way to a real sense of release, a renewed focus on sailing. For many of the sailors, and particularly for those who have not crossed the Atlantic before, nights in the build up to the start were tough. You do not go off on an adventure like this without having a few preoccupied and sleepless nights.

The Mini Transat îles de Guadeloupe would lose some of its character if it were not for some of the rebellious spirit, for those who do not want to follow the leaders like sheep, even if  the weather forecast tells them it is logical to do so. The Russian Yury Firsov (Magnum Sport) chose to drive south-east, taking the gamble of sailing through the area of high pressure in the middle of the Bay of Biscay. A bold gamble, one which looks like, could pay off. But is it not true to say that between a tour de force and a dirty trick, the only difference is success?

What the skippers have to say (reported from the French Naval ship PSP Flamant)
Julien Pulvé (Novintiss – 880 – Production boat)
“The start of the race was not easy last night and particularly towards the end of the night and early morning. We had been expecting this and it is always hard to anticipate what is going to happen in light conditions like this.  They are testing because you have to be on top of it at all times and it is not easy to keep on guard when not all that much is happening. It is great to be moving again and not have the sails flapping. I get the feeling I am well positioned, but will know more on the next ranking report.”

Clément Bouyssou (Le bon Agent ! Bougeons l’Immobilier – 802- prototype)
“The start of the race is going well. Up to midnight it was really nice with good spinnaker runs. The wind then dropped gradually for the leaders, which saw the fleet compress. It is not so much fun when the sails are flapping. The calm conditions last night did however allow for some sleep and to get into the racing progressively.”

Frédéric Denis (Nautipark – 800 – prototype)
“When it is calm, there is an element of the unknown and it is difficult to anticipate. You have to be on top of things at all times to gain each metre. We are going out to find the clouds out to the West, which will bring in the stronger winds but are unsure of what we will find on our route towards Finisterre.”