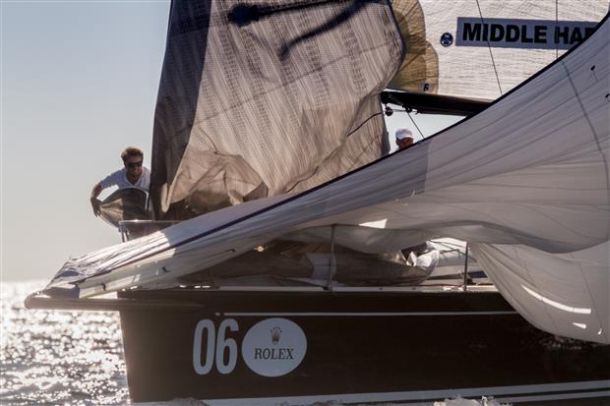 Few events can rival the Rolex New York Yacht Club Invitational Cup: the racing is fiercely competitive and technical; demanding split-second precision and teamwork. These attributes align with the values of Rolex, which has partnered with New York Yacht Club since the 1950s to support high-caliber yachting events. And with a spectacular fall day – the kind for which New England is renowned – to open the fourth edition of the Rolex New York Yacht Club Invitational Cup, three winners in as many races gave evidence that the 17 participating yacht club teams were working hard to showcase their skills and teamwork on Narragansett Bay.

The opening race of the series was won by the team representing the Japan Sailing Federation which has entered all previous editions of the Rolex New York Yacht Club Invitational Cup. With finishes of 15 – 6 in the subsequent races, they stand fifth overall with 22 points.

“The first race was very good, but second race was very bad,” said skipper Yasutaka Funazawa who is sailing the Invitational Cup for the first time. “It is so beautiful to sail here; there is nothing to compare it to, and Rolex support makes it very special to join this regatta.”

Not only is the team representing Australia’s Middle Harbour Yacht Club (MHYC) new to the event, until two days ago none of the crew had ever set foot on a Swan 42. With a win in race two, MHYC also dispatched the jinx that the event is notoriously difficult for first-time entrants.

“It’s good competition,” said helmsman Guido Belgiorno-Nettis who has sailed all his life, although only for the last 10 years competitively. “Nobody gives their quarter to anybody. Our goal is to try and avoid making technical mistakes. We’ve got good mechanical skills. We’ve got good boat speed; we just have to make sure we don’t put ourselves in awkward positions. That happens to every tactician and strategist. They don’t always get it right.”

As the 2011 Rolex Farr 40 World Champion, Belgiorno-Nettis is familiar with the impact the company has made through its involvement in the sport. “Rolex gives it the quality that an event like this needs; and they do it in so many different sports, as well as sailing. The commitment to sailing in particular has really helped, significantly, the development of the classes that they back; with their sponsorship comes all of the support activities, and people really do get excited by it and prepare for it. [Rolex] raises the standard.”

With finishes of 5-2-4, the Royal Thames Yacht Club team leads the overall standings with 11 points.  Helmsman John Greenland described the day: “It is always good to be consistent. Having done this event before, you know that at any one time you could be down at the bottom of the fleet. So to have a good consistent top-five result is a great outcome for us.”

Greenland has raced all three previous editions of the Invitational Cup: “It’s a great event.  There are very few events around the world now which have one-design racing in 40-foot plus race yachts; and the spirit of the event is great fun. There are so many faces which have come back a number of times. I’ve been lucky enough to do quite a few Rolex events and having their name attached to an event adds an extra level of prestige which attracts the top sailors in the world to the racing.”

After five days of competition, September 15-19, the winning team determined at the conclusion of racing on Saturday, September 19.

First held in 2009, the biennial Rolex New York Yacht Club Invitational Cup fuses five days of intense racing aboard identical Swan 42s, with a glamorous social schedule to deliver an unrivaled event for competitors from around the globe.