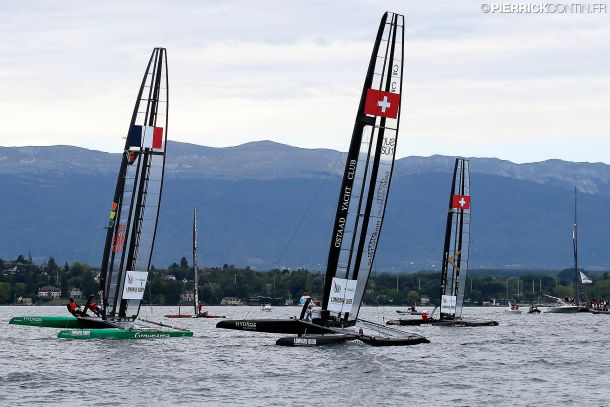 The first two days of the LITTLECUP qualifying races were characterised by fickle winds, with threatening gusts yesterday and dead calm today.

Two rounds were raced on Monday before a strong sou’westerly picked up on Petit Lac, increasing, with top speeds of more than 25 knots. After having suspended racing for a while, the committee finally decided not to send the competitors out onto the course. It was a decision which reassured the teams, some of which sustained varying degrees of damage, depending on the team.

Steve Clark, the C Class guru and Mike Costello from the Cogito 2015 team suffered particularly on the first day of the competition. After having got off to a good start, the Americans capsized during the 2nd round, seriously damaging part of Aethon’s wing sail. To almost no-one’s surprise, everyone looked on in amazement as the Groupama Sailing Team gave some fine demonstrations of high speed flight, reaching speeds of more than 30 knots and guaranteeing 1st place while taking care of their C Class boat, avoiding taking unnecessary risks so early on in the competition.

As for the Swiss teams, Axon Racing managed to get over having broken their dagger board a little and pushed their boat to 2nd place in the rankings, a fine performance giving Benoît Marie and Benoît Morelle good reason to be extremely pleased with themselves.

Tuesday was a different story altogether. After the blowy conditions of the previous day, the teams’ patience was put to the test as they sat out on the course, biding their time from 11h this morning until there was a breath of wind to strong enough to start the fleet races at around 16h30.

On the course set in the water off the SNG, Franck Cammas and Louis Viat got off to a flying start and Groupama held onto her leadership position on the water and in the rankings. Team Axon Racing confirmed their performance from the first day after a fine battle against Norgador and Sentient Blue, finishing 3rd and 4th respectively. Only one round was raced in light changeable conditions, wind speed barely topping 5 knots. Difficult conditions therefore making the competitors’ task that much tougher, particularly that of Team Gstaad Yacht Club and the Canadians of Rafale – ETS.