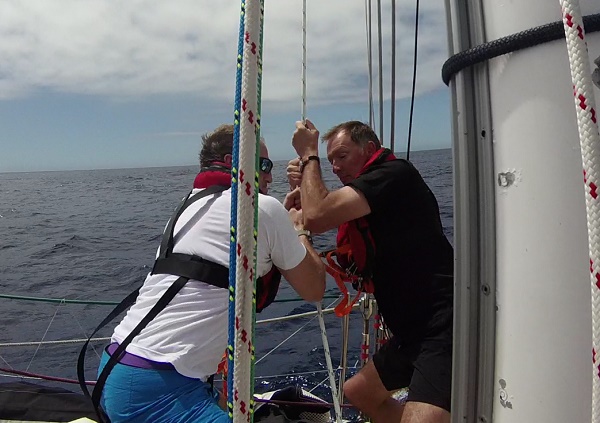 Sweating in the Doldrums on Telemad. Photo Clipper Ventures.

It’s been another day of unsettled tropical weather as the front-runners enter the Doldrums Corridor, and the chasing pack rounds the Cape Verde Islands.

In the front half of the fleet, GREAT Britain, Derry~Londonderry~Doire and Qingdao are all currently motor-sailing through the Doldrums Corridor, with Garmin studying the weather forecast and navigational tactics and deciding when is best to start. Race leader LMAX Exchange is nearing the end of its 60 hour motoring phase.

Visit Seattle leads the second half of the fleet, and its skipper Huw Fernie reports very light winds as it fights to make it down to the Doldrums Corridor before the winds drop off entirely.

Back marker IchorCoal’s adjusted place within the fleet is improving, placing it seventh based on its average speed so far after its redress time is applied. A redress time of 81 hours and 1 minute will be deducted from IchorCoal's finishing time in Rio de Janeiro to give the team's overall position on Race 1 from time lost following the tragic accident on board.

Skipper Darren Ladd said: “The good ship IchorCoal is currently stampeding south west at around 11 knots under medium weight spinnaker and full main. Cap Blanc is approximately 50 nautical miles to our east, and as our course and the coast diverge we slip from Western Sahara to Mauritania.

“Our 24 hour run time has exceeded an average greater than 10 knots for the first time and the crew have real purpose in everything we do. The laughter, the chatter, the banter are all still there but now allied with increased efficiency, and a greater understanding of what we need to do to maximise our boat speed.”

Max Stunell, skipper of PSP Logistics, in eighth place, said his team had put in some good miles over the last day, and have had all three spinnakers up at some stage.

“After the crew’s hard work we are back in contact with Visit Seattle, but with ClipperTelemed+, Unicef and Mission Performance all snapping at our heels it could go any way as we enter an area of disrupted wind and heavy squalls.

To read more about the tactics of the Doldrums Corridor, click here.