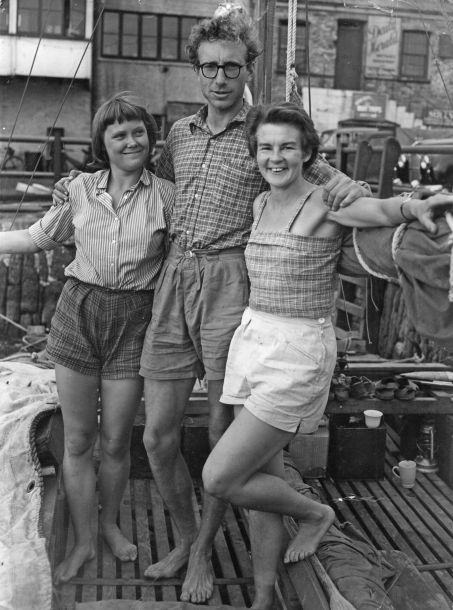 James Wharram poses with his two German crew (Jutta and Ruth) before departing in 1955.

60 years ago, on the 27th September 1955, I set sail from a Falmouth quayside aboard a self-built 23’ 6” flat-bottomed double canoe (now called catamaran) called Tangaroa with two German girls as crew. My quest was to sail the Atlantic to prove the double canoe was a seaworthy vessel.

In a Pathé newsreel clip filmed in Falmouth (https://www.youtube.com/watch?v=t72lKIpb3VY ) I called myself a marine archaeologist, a profession which did not exist in 1955.

The story was that in 1948 Thor Heyerdahl made the famous Kontiki voyage across the Eastern Pacific from Peru to the Tuamotu Islands “proving” he said, that the inhabitants of the central Pacific islands must have come from South America by sailing raft (not as is now accepted from SE Asia by canoe craft).

At the age of 16 during the war years I had bought a book ‘The voyage of the Kaimiloa’ written by a Frenchman, Eric De Bisschop; my first and probably most influential book in what is now an extensive boat library. De Bisschop built a 38’ junk rigged, Pacific inspired double canoe in Hawaii in 1938 and sailed it with a companion across the Pacific, Indian and Atlantic oceans (via Cape of Good Hope) to Toulon in France, thereby proving that the Pacific double canoe was a seaworthy craft, capable of making long ocean voyages. On arrival he received a heroes welcome, then in 1945 was written out of history because of WW2 and his family connection to the President of Vichy France!

As a result Thor Heyerdahl was able to persuade the public with his widely acclaimed Kontiki raft voyage that the ancestors of the Polynesians came from the south American mainland by sailing raft, because, as was then believed, the canoes of the central Pacific were not sufficiently ocean worthy for migratory voyages.

This explains why I, as a disciple of Eric de Bisschop, was in Falmouth 60 years ago with a 23’6” double canoe, about to cross the Bay of Biscay and on to Las Palmas to sail across the Atlantic Ocean to Trinidad. An ambitious project to prove Thor Heyerdahl was wrong.

From that voyage with a greater understanding of ocean sailing double canoes I built a 40’ v-ed hull catamaran in Trinidad (called Rongo), sailed it 1500 miles north to New York, then made the first ever multihull voyage from west to east across the stormy north Atlantic in 1959. This led me to become a designer of catamarans.

In many ways life is a series of seasons that echo our beginnings and in my design life I have come full circle with a brand new design, the same length as my 23’6” Tangaroa, a lightweight trailer sailer/coastal trek catamaran, the Mana 24. She has modern features and influences, but essentially the design philosophy that inspired me as a young man still motivates me now.

Suffice to say; I think that modern sailing boats are being priced out of the market. Not just by 20% VAT but by the price of moorings and marinas. The best solution to this problem is to self-build your boat and to trail it home. The other advantage of a trailer boat is that you can take it to different sailing grounds, or to where the weather is good, giving you a much wider horizon.

Last year a book called ‘Micro adventures, local discoveries for great escapes’ by Alistair Humphreys was published. This book ties into my life philosophy as a rock climber and wanderer before I became an ocean sailor. A small boat that can be trailed, like the Mana 24, can satisfy this spirit of adventure that so often never gets a chance in our hectic modern urban lives.

To the practicalities: I/we assisted by a team of Cornish enthusiasts; local designer and CAD expert Simon Holman, the computer cutting firm Fibrefusion and the Cornwall Marine Network, have tied all our sailing, design and building knowledge into this new 24’ car trailer-sailer design to be sold as an easy to assemble ‘Ikea’ style kit boat. Using state of the art CNC machines, 3D graphics and a design concept we hope will appeal to an audience of adventurous, free spirited people.

Low budget sailing, camping and adventure for families feeling the sting of the economic downturn.

Thanks to James for keeping us updated on his latest designs and life. He is launching the Mana 24 on the 30th of September at Falmouth where he launched Tangaroa all those years ago. If anyone happens to attend please drop us a line and let us know how it goes.

Fair winds James and all at Wharram Designs.