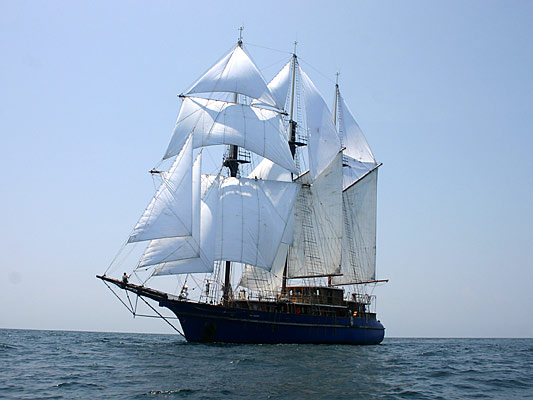 We spotted the tall ship Peacemaker for sale via Craigslist. Here's what the owners have written about her:

The Peacemaker was built on a riverbank in southern Brazil using traditional methods and the finest tropical hardwoods. The ship was first launched in 1989 as the Avany, a name chosen by her designer and owner, Frank Walker, a Brazilian industrialist. He planned to spend some time traveling aboard with his family, and then operate it as a charter vessel in the Caribbean.

After an initial voyage in the southern Atlantic, they brought the ship up through the Caribbean to Savannah, Georgia, where they intended to rig her as a three-masted staysail schooner. Other demands captured the attention of the Walker family for many years, and during the summer of 2000 we found the ship still waiting in the Palmer- Johnson boatyard, her beautiful bright work bleached by the sun, and her bottom heavily encrusted with marine life, but otherwise sound.

By the time we made contact with Mr. Walker, he was looking for a buyer, and liking us and our vision for the ship, he gave us a good price. After considerable effort to put her mechanical systems in order, and to scrape and paint her bottom and topsides, we motored out of the boatyard in September, 2000, looking for a home port.

Most of the following eight or nine months were spent at anchor in various harbors along the southeast Atlantic coast from Beaufort South Carolina, to Palm Beach, Florida, until we finally settled down in Brunswick, Georgia, in the spring of 2001. Since then we have worked hard at upgrading her mechanical and electrical systems, as well as designing a practical and aesthetically pleasing barquentine rig.

In the summer of 2006, we assembled a rigging and sail-making crew from amongst our own people, under the direction of Wayne Chimenti, an expert rigger of tall ships. We set sail for the first time in the spring of 2007, under the name Peacemaker, which expresses in a word our vocation as a people: bringing people into peace with their Creator and with one another.

Our vision for the ship is to be a seagoing representation of the life of peace and unity that our twelve tribes are living on land in our many communities around the world. It will also provide apprenticeship opportunities for our youth to learn many valuable and practical skills, not only in rigging, sail-making, sailing, navigation, marine mechanics and carpentry, but also in living and working together in tight quarters, as well as many cross-cultural experiences traveling from port to port.