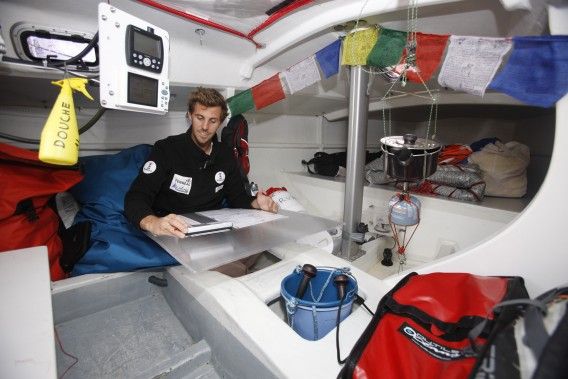 No luxuries and not much room below decks on a Mini. Photo © Jacques Vapillon / Mini Transat Îles de Guadeloupe 2015.

The Mini sailors face living in a tiny space for at least three weeks.  The cockpit, often drenched by sea spray, becomes the simplest form of home and space to provide shelter in bad weather. Knowing how to be comfortable on board, remain philosophical, and how best to physically accommodate oneself will become the major preoccupations for the sailors. Being able to rest in such a tiny cabin space, one that is mainly used for stowing and re-stacking all material will be important.

The  prototype designed for speed

None of the sailors competing on a prototype (Eurovia Cegelec Trophy) are under any illusion. The low beam to reduce windage and the keel head box area used for canting the keel, means that space is maintained to an absolute minimum. Nearly all the sailors admit that they spend the most part of their time on board in the cockpit. On some boats like Ludovic Méchin’s Microvitae, getting in and out of the boat is already quite a challenge as the hatch is narrow. The carbon that is used on the prototypes (Eurovia Cegelec Trophy) is rough and inside, the cabins are more like being down a coalmine shaft than in the comforts of a camper van.

Daily life on board is reduced to the rudimentary, the essential for living. Sleeping amounts to finding a place to curl up in on a pile of sails, ropes and boat kit.  The only concession to comfort for some is a small foam mattress, one that is as light and therefore as thin as possible. For meals, the sailors most often use a small pot to heat their food, the same for water and then for eating the freeze-dried meal from.

Life on board the production boats (Océan Bio-Actif Trophy) changes completely. The living area is much more spacious and wider and there are portholes lighting up the space and, with no canting keel mechanics, life on board is much easier. This is the main difference compared with the prototype designs (Océan Bio-Actif Trophy). On the one hand you have basically a narrow cupboard in which you make the least amount of changes and the other you have a really comfortable space in which many want to spend lots of time in. Ian Lipinki sailing on Entreprise Innovantes feels that he will spend the most part of his nights at sea below deck in order to conserve and keep up his energy levels.

The first stage often boils down to settling down to a rhythm and getting an organised life on board. The second, in the trade winds, is about getting used to the heat, avoiding sunburn and organising daily living. Everyone will refine his or her daily routines along the way. From the minimalists, the messy, obsessively organised, you gradually see each finding the way that suits them best. The most important is that each one finds what works best on the crossing.

What the sailors have to say:

Sylvain Michelet (France – A chacun son Everest, Tip-Top. Production Boat Océan Bio-Actif Trophy)
The boat is really very comfortable below deck. It is incredible. I have however got used to not spending too much time in the cabin. If the weather allows, I sleep on deck.  I see the cabin as a big cupboard; it is great, you have lots of space for stowing your things!”

Maxime Eveillard (France – Zigoneshi, prototype Eurovia Cegelec Trophy)
“My camping mat is the only luxury I have allowed myself to have on board. I also try and have dry underwear every day. Otherwise I have a small stove to warm up food and some cereal bars. The cabin is used basically to stow material, do my nav prep and to sleep. You spend most of your time at the helm.”

Nacho Postigo (Spain – Vamos, Vamos  Production Boat Océan Bio-Actif Trophy)
I sleep on a big bean, which fits in the boat really well. The one luxury I have allowed myself is a foam chair with a backrest, which means I can be at the helm comfortably and not get tired. Keeping as dry as possible and also I have a big shield which keeps me protected.”

Thomas Dolan (Ireland – Shamus Software, Production Boat Océan Bio-Actif Trophy)
“I am used to sleeping in uncomfortable spaces and have now spent 10 days on board so am not too worried. The only thing I have taken with me is a couple of sleeping bags, but then I do not sleep all that much. Below deck is actually quite comfortable, although I do not spend very much time there.”