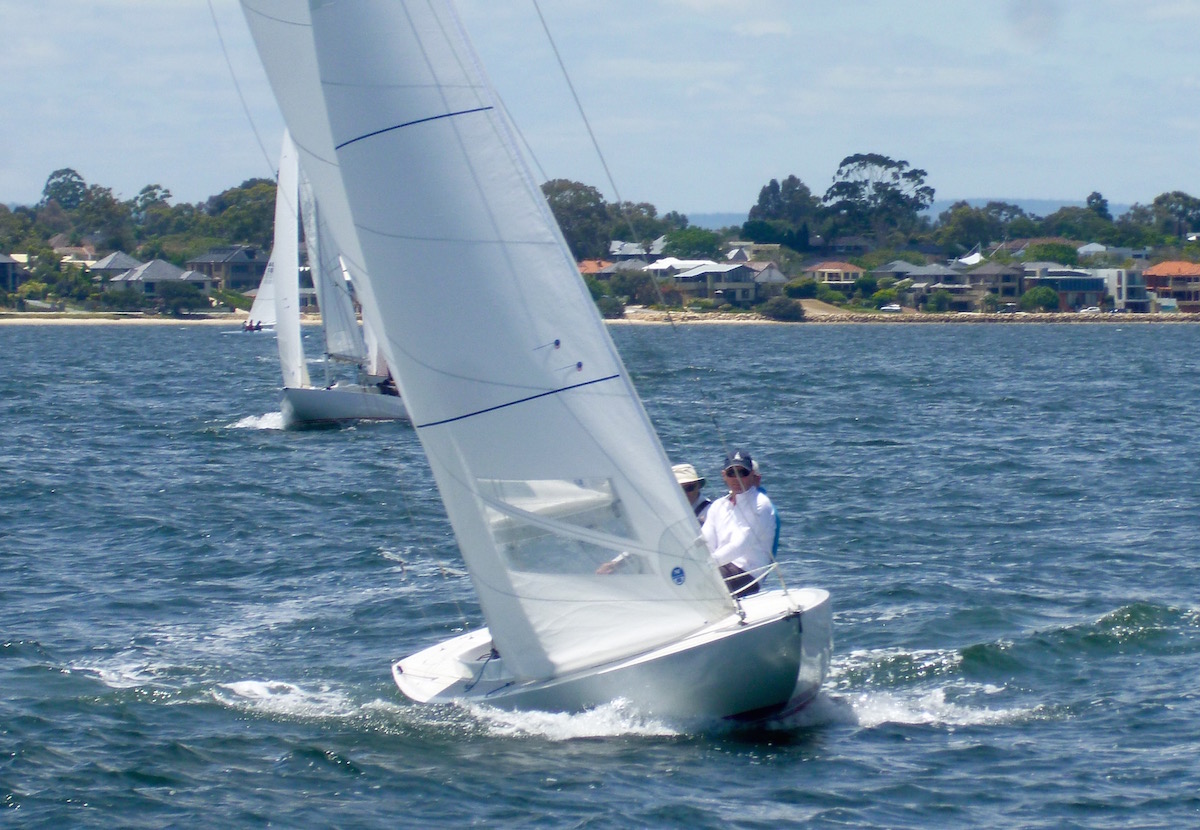 Thirteen Dragons competed in the 2015 WA Dragon State Championship in Perth under the burgee of the Royal Freshwater Bay Yacht Club over a three day weekend from Friday 11 – Sunday 13 December. The regatta enjoyed an excellent mix of very testing sailing conditions and tactical racing.

The format scheduled one longer race on late Friday afternoon, three short races on Saturday morning and a break with a longer race later in the afternoon and a finale on Sunday morning with the regular windward/leeward courses in the Melville Water area on the Swan River in Perth.

Fridays race one was held in a gusty late afternoon sea breeze of 16 – 18 knots which proved to be a testing introduction to the series. The fleet were well back from the line playing it very safe but the early leader was Greg Leaversuch (Jump), raising eyebrows on the official start vessel ‘Four Seasons’ as ‘Levo’ is relatively new to the class coming from a Flying Fifteen background. However ‘Levo’ was gradually worn down by class stalwart, Ray Chatfield sailing (Wizzardry) and Peter Bowman’s beautiful old wooden boat (Aeolus). Trish Ford racing (Canewdon Witch) had the broomstick between her legs making great grounds until an impromptu swim by big David Hay put the breaks on progress. Ray Chatfield put the hammer down to win comfortably in the fading sea breeze from Peter Bowman with Andrew Foulkes (Tatsu) coming through to grab a handy third.

An overnight break and an early start on Saturday morning as PRO John Taylor (JT) did an excellent job of getting three back to back races completed before the Swan River crowds over with fleets of club sailing and party going stink boats enjoying the typical Perth summer weather.

Race 2 begun in hazy sunny conditions with 6 – 8 knots and flat water. The breeze was very shifty and the PRO had to work hard to adjust the course axis to ensure fair racing. But it also proved to be a real brain teaser for competitors. Still the fleet played the starts conservatively with the exception of a couple of culprits being called over eager.

Ron Black (Nereus) and Ron Packer (Icefyre) traded the early blows for the lead with Andrew Foulkes (Tatsu) in the hunt. But it was Ray Chatfield (Wizzardry) weaving his magic again to close the gap. On the final run, Ron Black just pipped Ray Chatfield on the line with John Cassidy (Seajoy) sneaking in for third.

Race 3 quickly followed in similar conditions with another 2 lap windward/leeward course. Class favourites Willy Packer (Scoundrel) and Andrew Foulkes (Tatsu) fought for the pin and the left hand side of the beat and ‘Foulksy' came out on top on lap 1, leading Trish Ford (Canewdon Witch) with Greg Leaversuch in hot pursuit. Despite a big shift to the South as the sea breeze threatened, Andrew Foulkes held on to win from Greg Leaversuch jumping into second with Trish Ford making up the podium.

The final race of the morning shift was held in a slowly building sea breeze of 10 – 12 knots. Two more Dragons broke the line, this time with Trish Ford not returning and thus picking up a DSQ. Winless Willy (Packer) bolted off the line to lead the ever steady Ray Chatfield with Peter Bowman on the chase. The breeze built on each leg and ‘as the gate was unlocked and the sheep started bolting out of the paddock’ (white horses appeared on the Swan River!) there was no stopping Willy Packer, who had the bit between his teeth to take his first bullet of the series by a good margin from Ray Chatfield with Peter Bowman taking third.

The fleet then returned to the grandiose grounds of the Royal Freshwater Bay YC for lunch, siestas, massages and in Greg ‘Levos’ case, a few ales! to clear the Swan River for the afternoon chaos that takes place on a busy Saturday in December.

The last race of the day was saved for the most spectator fun, a gusty 18 – 22 knot sea breeze with the occasional blast of 25k ensuring some great ‘rock n role’ downwind action enjoyed from the binoculars onboard “Four Seasons”.

A really close and clear start for a longer 3 lap race with Willy Packer (Scoundrel) starting where he left off leading the fleet with Andrew Foulkes (Tatsu) and Ray Chatfield (Wizzardry) battling for second. After some crowded gate rounding’s and some really hot downwind surfing, Willy Packer seemed to have the win in his bag until he uncharacteristically split tacks with Andrew Foulkes after rounding opposite gate marks. A favourable shift was all that Foulksy needed to grab the win demoting Willy to second and Ron Packer (Icefyre) in third.

Overnight three Dragons went to bed tied on points: Willy Packer (Scoundrel), Ray Chatfield (Wizzardry) and Andrew Foulkes (Tatsu), leaving the championship on a knife edge. So a long day on the water on Saturday was followed by an early start on Sunday morning for two final races before lunchtime. The morning was typically warm and hazy with a light and shifty 6 – 8 knot breeze. After one aborted start the race officer skilfully set a shorter w/l course.

Willy Packer started at the committee boat end and tacked to the usually un-favoured right side of the course. Ray Chatfield looked famous going down the middle and Andrew Foulkes chose the trusty left. But it was John Cassidy (Seajoy) having his day in the sun leading Peter Bowman (Aeolus) with Willy Packer carving through the fleet taking places on each leg.

After the shorter 2 lapper, John Cassidy closed it out from Peter Bowman with the three tied boats coming in 3rd, 4th and 5th. And thus the WA Dragon State Championship would go down to the wire with a winner takes all final race.

Race 7 started in a slowly building sea breeze and more mark shuffling by the race management. Willy Packer went for the pin whilst this time Andrew Foulkes broke with tradition to take the committee boat end but sadly for Ray Chatfield he really blew his chances with a down speed start and a rash gamble at banging the right hand corner. Peter Bowman also blew his chances of a podium by failing to return from another OCS.

It was early advantage to Willy Packer with Greg Leaversuch (Jump) slowing the advances of the chasing Andrew Foulkes. The fight was still on after two laps but on the final lap Willy Parker just put his foot down to finish the job crossing the line a good 30 seconds ahead of Andrew Foulkes in second with John Cassidy another excellent race for a podium finish.

“I made it hard for myself, the winds were not the normal WA winds with the ‘Fremantle Doctor’ and the Easterly, there was no gradient breeze, the shifts were 20 degrees up and down so everyone was coming in from every where and it was horribly close all weekend. There were about seven boats in it at the start, then it came down to about three and right down to the wire in the 7th race where three boats were 1 point apart. With all these 20 degree shifts you could never know you had won the race until the last race when the solid wind built on the last day. There was big voids in the wind, you would be going along in 20 knots and then suddenly it was 10 knots and 7 knots. It was wild.”

‘Foulkesy' (Andrew Foulkes) always good in a shifty breeze he gives us a hard time at the State Championships, he is such a naturally great sailor he always keeps everyone on their toes. But also this year Ray Chatfield has really been working hard on his yachting and until the last race he was in it so it was really close sailing.”