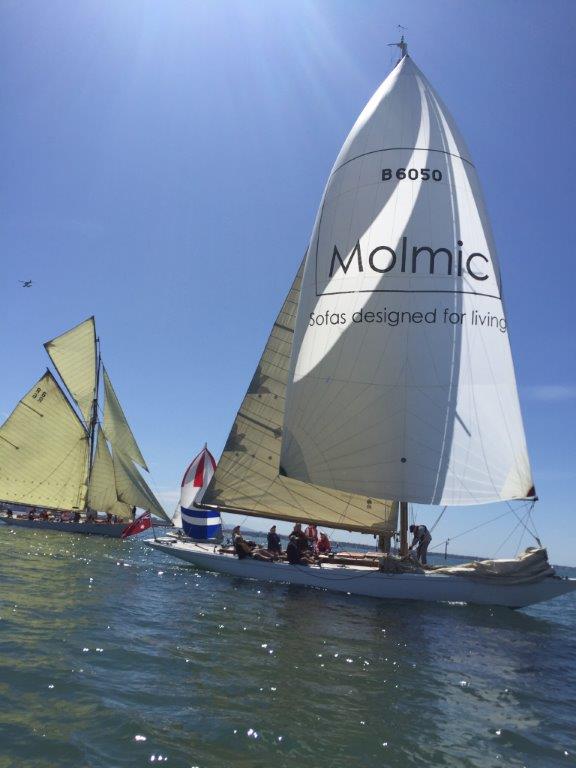 Sayonara Cup Champions: Sayonara in 1905 and Frances in 1952 and 1952 racing for Classic Yacht line honours. Jimmy Watson’s of the Carlton Wine Bar fame

All’s well that’s ends well were the words for the day. After resolving our pre race management issues, today race, without exaggeration was one of the better Classic Yacht races for some time.

With a decent breeze and flat water the Classic fleet of 19 starters all going for an on the money start were described as a sight and a half by the race committee. Avian at the pin end and Boambillee at the committee led the fleet away in great style. In the middle was Sayonara with full rig and fully committed for her on time start, under the helm of Ron Evans our CYAA Sydney member. Warringa was another Classic who started well under a never seen before asymmetrical.

Kites were cracked to work on the fully shy run. Some could and some couldn’t hold them was the result. Those classic’s who held on with full kites were soon in leeway trouble.

Following Boambillee, who was part of the1969 NSW Southern Cross Sydney to Hobart team, lead the fleet out to the Gellibrand Shoal mark. Following her was a sail off between two of the notable classic yachts, both winners of Australia premier yachting trophy. Sayonara launched in 1897 and Sayonara cup winner in 1907 and Frances launched in 1948 and Sayonara cup winner 1951/1952. In close company was Trim, the Ohlsen 35, and the Tumlaren pod of Avian, Sirocco and Ettrick.

Boambillee lead the Classic fleet at the mark rounding and all set for the running duel with Frances. Sayonara. her large crew on the lee side and constant headsail trimming, was keeping in contact with the leaders.

At was not the time to look behind as not far from the Tums and Trim was the swift flying bird, Tandanya, designed by Henry Rasmussen and launched in 1936, was under the helm of Stephen Lake, to lead the still the top scoring Admirals Cup Yacht of 1967, Mercedes III, around the P3 mark.

After an excellent run to P3 the fleet was still bunched up. Bungoona wasn’t far behind along with two more Tumlarens, Snow Goose and a rapidly closing Dingo along with the Knud Reimers Albatross designed Bluejacket helmed by Doug Jenkin. Chris Havré’s Akuna was also on the pace. Martini and Cyan had recovered after stalling at the start while Michael McTavish was giving Serifa her first Classic Yacht race for some time.

This fleet bunching was going to bring in some interesting corrected time results said the handicapper. Any mistake will be costly.

Back to Gellibrand and then Mark 72 and down to R4.

Frances had overhauled Boambillee and set a kite on the approach to Mark 70 to take advantage of the wind set change by Breakwater pier. In procession those in the fleet who could set kites did. More down wind work was the go , Sirocco, while trying to take wind away from Mercedes III worked hard to hold off Avian and Ettrick. Akuna was also into kite flying mode.

With a windward work featuring tacking duels between Frances and Boambillee that saw Frances lead the fleet across the line, exhausted crews from each Classic called for the smelling salts. Classic yacht tacking duels and crew age cannot go on forever.

Sayonara also put in a close up wind performance to hold off Mercedes III. Phil Atkins had Trim in a comfortable position to follow while the Tumlaren Sirocco held off the hard following Tumlarens Avian and Ettrick. Warringa, Jimmy Watsons old day sailer by JJ Savage was next after deciding not to bother asking Rolly Tasker for help. The Tums Dingo and SnowGoose were through next with Tandanya and Bluejacket not far behind. Martini, Bungoona and Cyan were caught by a dying breeze while on the run to R4. Closing the Classic Fleet race for the day and still on the pace were Loama, Serifa and Akuna.

Our end of the race year BBQ thanks to work of the Tumlaren team headed up by Karen Batson was the hit of the day.

Thanks go to Sam Cowell and Tony Hoppe of Warringa for their assistance to the handicapper to calculate the corrected time results. Invaluable assistance that saved the day.

Time corrected times were a feature of the race results. The first 5 placing were inside one minute. Only small numbers of elapsed time seconds separated the first four placings. Close to six minutes separated the placings up to 17th. Close racing with no mistakes was the order of the day.

Presentation of the Lark Distillery trophies from the Cup Regatta 2015 were made prior to the Race 5 results announcements. Winners of each of the 5 races received product from Lark Distillery of Hobart. The Best overall for Cup Regatta was Warringa helmed by tim Boucaut.

Great cheer was the noise when Bon Munro’s Tandanya was announced as the corrected time winner. Congratulation for the pay off for the hard racing put in by Stephen Lake and the Tandanya crew.

Thanks to Hobsons Bay Yacht Club and the race committee team that looked after the race manage aspect of today’s race. The Race committee reported the sight of the Classic fleet running to the line with kites and top sail’s working as the clocked counted down the last seconds was another unforgettable Classic Yachting sight.

The Summers series restarts January 31 with Race 6 at RMYS.

Happy Christmas and New Year to all