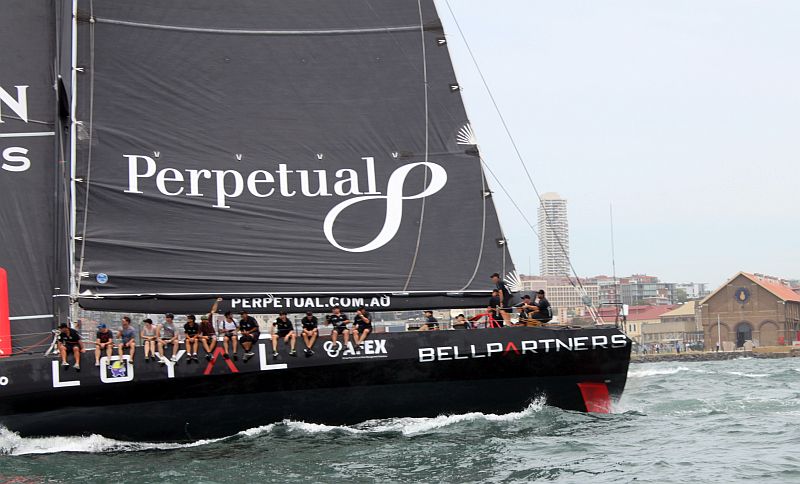 The new Wild Oats XI is fast. Very fast. Rambler 88 is genuine threat for handicap honours in the Rolex Sydney Hobart, but apart from that, there is nothing from today's SOLAS Big Boat Challenge to help predict Hobart form.

On a grey, humid Sydney day with around 12 knots of wind, four super-maxis and four 60 – 70 footers did battle. It immediately became a race in two parts.

Unfortunately, three of the four smaller boats were called OCS, leaving a split in the field that could never be healed.

It has been widely documented that Wild Oats has had a nose job and some liposuction – a new bow to add bouyancy downwind and a new stern to balance the changes forward. It has worked.

The big silver 100 footer showed an amazing turn of pace downwind and won the race by three minutes and 50 seconds.

Perhaps the suprise package was Rambler 88, which showed excellent upwind speed in the moderate conditions. At the first mark, the Junction Bell near the Sow and Pigs reef, she was just a boat length behind Oats. As soon as the downwind sails were unfurled, Oats created a big gap, but Rambler refused to go away.

Behind the two leaders the other 100 footers, Perpetual LOYAL and Ragamuffin 100, had days they would rather forget. Slow sail deployment and a few too many tacks and gybes dropped them well off the pace. By the finish LOYAL was two minutes behind Rambler with Rags a further minute and 10 seconds down.

Behind – way, way behind – Black Jack emerged from the pack to take fifth place, ahead of Chinese Whisper, Ichi Ban and Brindabella.

Unfortunately, the gap caused by the OCS didn't give us a realistic assessment of the form of these four for Hobart. However it was significant the Chinese Whispers won the day on handicap, so Rambler won't have it all her own way if it's a big boat benefit come Boxing Day.

It was also unfortunate, in a way, that Comanche didn't take part. She is finalising her commissioning after coming off the ship and is still waiting for skipper Ken Read to arrive in the country. But in some ways her non-appearance has added spice to the big race.

Oats is obviously very fast and the “renovations” appear to be a success. But are they enough to make up for the improvements Comanche has made in her extensive offshore racing career since entering the Hobart as a complete novice last year?

Tune in on Boxing Day and more will be revealed.

The post race media conference included some interesting comments from key players, but no-one was giving too much away.

An obviously very satisfied Rupert Henry (Chinese Whisper) said that his boat is an “all rounder” that is maximised for IRC, so she is competitive in all conditions. “The boat is beyond my expectations,” he said. He also pointed out that the 62 footer uses manual winches so it is “real sailing”.

“It was a pleasure to be out there with the big boats,” he said. Commenting on being over the line at the start he wryly observed that he and the starter had “different eyesight” but added that it was good that the big boats got “out of the way”.

Mark Richards, skipper of Wild Oats, said he was pleased to see improvements across the board in the eight-times line honours winner. However, pointing to 2011 when Perpetual LOYAL beat Oats, he warned that the fastest boat doesn't always win the Hobart. “One breakdown, one bad sail change and it can all be over.”

George David, owner of Rambler 88, said it was interesting to be out on the course with his old boat Rambler 100 (now Perpetual LOYAL), which lost its keel and turned turtle in the Fastnet. Commenting on downsizing to the 88 footer he said that the power to weight ratio was much better in the smaller boat, making her more agile and giving her amazing acceleration.

“She is 45% lighter than the old Rambler, so very different to sail. There are conditions where she is very quick. Overall we're about a percent and a half off Comanche, so who knows?”

Listening to these superstars of ocean racing one thing is crystal clear – there is no clear favourite for this year's race. The weather, good strategy, good crew work and a lot of luck will all play their part.