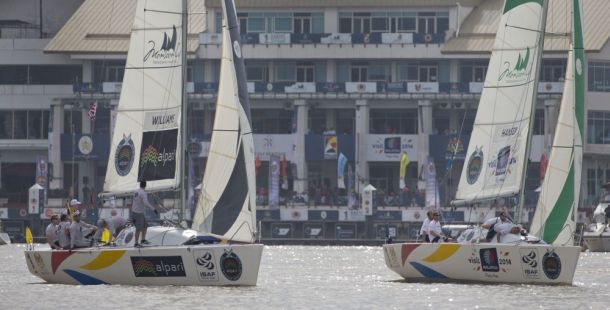 London, UK (26th Jan 2015): Monsoon Cup Malaysia, the final event of the 2014 Alpari World Match Racing Tour, is to take place in its new home of Johor, the southernmost state of Malaysia, over 10th-14th February. In addition to being the grand finale of the Tour, the event will also see the 2014 ISAF Match Racing World Champion crowned.

Much is at stake for Ian Williams and his GAC Pindar team. To date Williams has won the World Match Racing four times (in 2007-8 and 2011-12). If at the Monsoon Cup he can score a fifth World Championship victory, then he will surpass Australian Peter Gilmour’s record of wins (in 1990, 1997-8 and 2006) and will enter the history books as the person to have claimed the world title the most times in the Championship’s 27 year history.

In 2013, Williams narrowly missed out on achieving the record when he finished runner-up, five points shy of US Virgin Island skipper Taylor Canfield and his US One team. For the present championship, Williams is in better shape. Once again the main threat is Canfield, but going into the Monsoon Cup the British match racing ace holds a six point advantage over his rival. Unfortunately in real terms this doesn’t represent much of a cushion: Williams still has to finish within a place of Canfield if he is to secure his fifth World Championship title.

“We’re six points ahead of Taylor and last year we were ten behind, so it is the same sort of magnitude and whichever team progresses furthest will probably win, unless something unusual happens, like last year, when we ended up only one place ahead with the second place in the final,” says Williams. “For us, our approach is to try and win the regatta and if we do that we’ll be World Champions. He has more to think about trying to knock us out early.”

Meanwhile Canfield is out to defend his World title. “While we worked hard to close the gap in the overall standings after Williams took a big lead in the beginning of the season, we are in a position to still take the title. It is our Championship to win and Ian's to lose. With the pressure on Williams, any mistakes will be costly as we only have to put one boat between us in the Monsoon Cup to win the AWMRT Championship.”

A championship victory for Canfield will also be significant for his Kiwi tactician Rod Dawson as personally this will represent his fifth World title, having previously scored three with Peter Gilmour, and one with Canfield in 2013.

Mathematically as it stands, any one of the top five crews on the leaderboard could win the 2014 Alpari World Match Racing Tour. 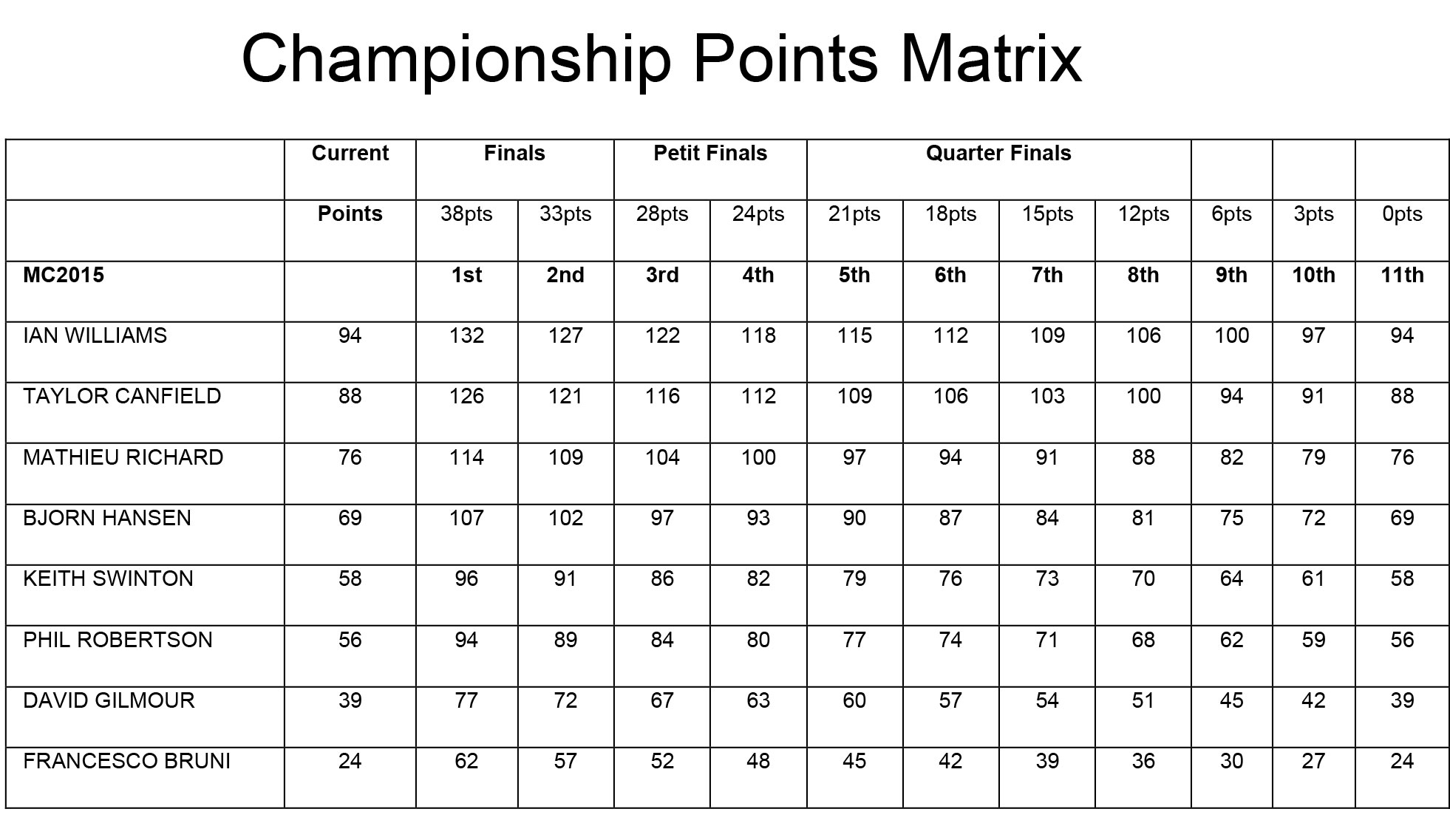 Statistically however, for Australian Keith Swinton to clinch the title – he is currently lying in fifth place – he would need to win the event and Williams would need to finish in 11th place or worse, Canfield in 9th or worse, etc.

12 points adrift of Canfield at present, third-placed Mathieu Richard and his Lunajets crew are better placed to gun for the top spot, but this would require yet more stars to align: the Frenchman would have to win the Monsoon Cup, Williams to finish sixth or worse (unlikely as this would be his lowest Monsoon Cup result in five years) and would require a fourth or worse finish for Canfield, who, again, has not finished off the podium since Match Race Germany in June.

The chances are even slimmer for the Stena Match Cup Sweden winning skipper, Bjorn Hansen, who lies in fourth place on the leaderboard going into the Monsoon Cup, a further seven points astern of Richard.

More realistic is the prospect that any of the top five could reach the 2014 Alpari World Match Racing Tour podium. Mathematically sixth-placed Phil Robertson and his WAKA Racing Team are in with a slim chance, even if they are 20 points adrift of it at present. However it should not be forgotten that it was the young Kiwi skipper who is the defending champion of the Monsoon Cup, following his victory in Kuala Terengganu in 2013. Sixth going into the Monsoon Cup that year, Robertson’s ended up elevating WAKA Racing to third overall in the championship.

As Tour Director of the Alpari World Match Racing Tour Craig Mitchell observes: “The overall result still hangs in the balance with Williams holding a slight edge over Canfield and any of the top five still technically able to win. Qualifying will be all on from the outset as those results will decide who selects their opponent for the crucial Quarter Final knock-out stage. We've had some pretty big championship deciding showdowns in the Quarter Final in previous years and depending on where teams are placed in Qualifying I can see some fireworks happening again.

“The Monsoon Cup is going to be an intense event and with a new venue in Danga Bay, Johor teams will have curve balls coming in from all over the place. Add to that the inevitable mind games, it will add to a spectacular finale.”

In addition to winning the World Championship title and the chance to enter the history books alongside the likes of Chris Dickson, Russell Coutts, Dean Barker, Peter Gilmour, Ed Baird, James Spithill and Ben Ainslie, also at stake is the prize money, both for the Tour as well as for the Monsoon Cup.

From a prize purse of US$ 500,000 – the largest across the breadth of professional sailing – the World Champion and winner of the 2014 Alpari World Match Racing Tour receives US$ 100,000, the second placed finisher US$ 80,000, with prize money on a diminishing scale to all eight Tour Card skippers.

Follow all the action on LIVE streaming from 10-14 February at www.wmrt.com.