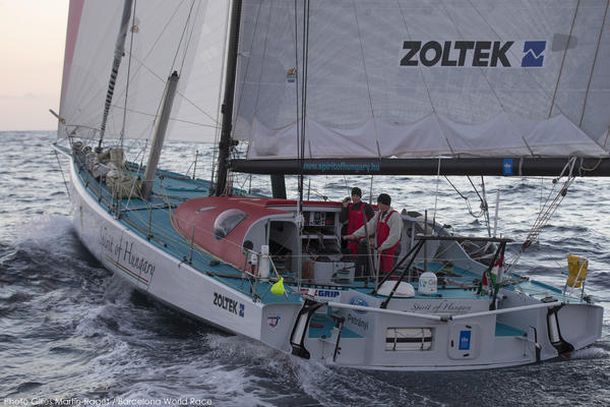 As the leaders of the Barcelona World Race race to the Crozet Islands, once again their paths have diverged – Neutrogena around 200 miles to the south-west of first-placed Cheminées Poujoulat on the water, and gaining around 40 miles in the past 24 hours.

For Cheminées Poujoulat the approach looks straightforward – this morning’s 12-15 knot westerlies shifting south and carrying Bernard Stamm and Jean Le Cam towards the Crozet Isles, to the south of a high pressure system. They are likely to arrive at the archipelago on the morning of Thursday January 29.

Meanwhile Neutrogena have a more manoeuvre-heavy but potentially faster approach. Sailing much of today in 5-10 knots more pressure than their nearest rivals, they are this afternoon skirting the Antarctic Exclusion Zone of 44°S, and look set to gybe by this evening. The wind is forecast to lighten in this area just to the north of the AEZ – the challenge for Guillermo Altadill and Jose Munoz will be staying with the pressure through a series of gybes to make the point. They too are expected to arrive at Crozet on Thursday, and it will be intriguing to see if they have reduced the time deficit from the 12 hours difference bet ween their passing of Cape Aghulas two days ago. Neutrogena have gained 36 miles on Cheminées Poujoulat in the past 24 hours, reducing the margin to 126 miles on the leaderboard.

GAES Centros Auditivos this morning became the third boat to enter the Indian Ocean, crossing the 20°E longitudinal line at 01h40 UTC, after 26 days, 14 hours and 40 minutes of racing. Anna Corbella and Gerard Marin have also regained around 60 miles on the leaders Cheminées Poujoulat.

Gerard Marin reported that they had experienced a fairly rough crossing between the two oceans. A continental shelf approximately 150 miles south of the southernmost point of Africa, Cape Aghulas can famously create steep waves and confused sea states, exacerbated by the unstable winds in the region.

“We recently passed the Cape of Good Hope and the sea has stopped being so difficult. Now we are facing m ore stable waves from astern and we are almost moving at the same speed as them, using the mainsail with a reef and are much happier. In these past few hours we crossed from one ocean into another where the sea was quite confused. It was chaotic and that affected our course because the waves were very violent.”

Fourth-placed Renault Captur, and We are Water in fifth, both continue to post 15-16 knot average boat speeds, now both in the Roaring Forties. For the Garcia brothers this will be their first sojourn into the 'Deep South'. Willy, a jeweller by profession, has completed many Mini Transat and Figaro races but never an IMOCA ocean event, while elder brother Bruno’s previous Barcelona World Race entry ended prematurely at the Cape Verde Islands in 2011.

One Planet One Ocean is also on the cusp of the South, and made the greatest mileage gains today, covering 371 miles in 24 hours on the 15-year-old IMOCA 60 (previously Kingfishe r).

Spirit of Hungary skipper Nandor Fa, aged 61, undertook a three and a half hour rig climb yesterday, after discovering that main halyard had chafed into the rig tube, splitting the top of the mast and jamming the sail tight.

Co-skipper Conrad Colman explains: “We could not even raise or lower the mainsail and the conditions for the next few days, it would have been like not being able to lift off the throttle when you approach a bend.”

The Hungarian owner-driver climbed to the very top of the 29m-high mast, cutting free the halyard for Conrad to repair, while he fixed the halyard lead using an outer block.

Conrad reported: “I saw that the main was slack, so we rehoisted it and pulled the lock line to secure it in place. The sail slipped again which stressed us out as we've had problems with this mechanism before. So, out with the binoculars to see what the problem was (yes, the mast real ly is that high!) and we saw that the halyard was off to the side and had cut into the mast!

“Our carbon fibre mast is incredibly strong but our high tech rope halyard proved tougher. Under tension it jumped off the pulley at the top of the mast and sawed 30 cm down into the mast until it jammed completely.

“I hoisted Nandor up the mast and he cut out the halyard after several attempts to dislodge it (I think I learned some new Hungarian words today!) and sent the shredded end down to me to repair. We now have an external main halyard with a pulley lashed in place at the mast head in the place of the damaged original.”