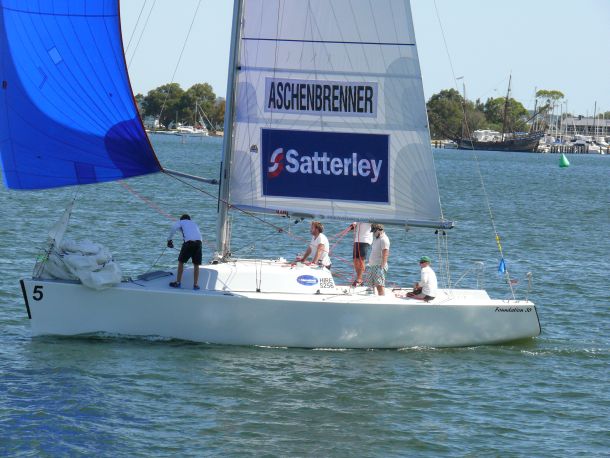 Danish skipper Joachim Aschenbrenner has taken over the top spot on the leader board after the second day of the Warren Jones International Youth Regatta, the young skipper from the Royal Danish Yacht Club ends the day with a score of thirteen wins from fifteen starts.

In second place with twelve points is local skipper Matt Jerwood, who was the overnight leader, and who lost his match against Aschenbrenner in controversial circumstances. Another Perth skipper, Sam Gilmour, holds third place with ten points.

“We had a good day, everything worked out on the boat, the team are starting to work well together so that’s pretty good,” commented the amiable young Dane, who has travelled from Copenhagen on his own, and is using an entirely local crew, who he had never met before this week.

“We were struggling a bit in the beginning,” he confessed, “I think some of them haven’t done that much match racing, some have done a bit of match racing. So some people were coming from fleet racing boats, so we are getting it all together and getting into this discipline.”

With a very flighty and fickle easterly breeze teasing the Swan River all morning, the patience and skills of both the competitors and the race committee were tested to the limit.

The regatta, which is being hosted by the Royal Perth Yacht Club, and run by Swan River Sailing, is sailed in Foundation 36 boats, which are larger than those usually used for youth regattas.
Stronger winds, of up to 25 knots are being forecast for the last two days of the event that finishes on Friday. Only Australian and New Zealand skippers have ever won this trophy in the past, so could the title go to the northern hemisphere for the first time?