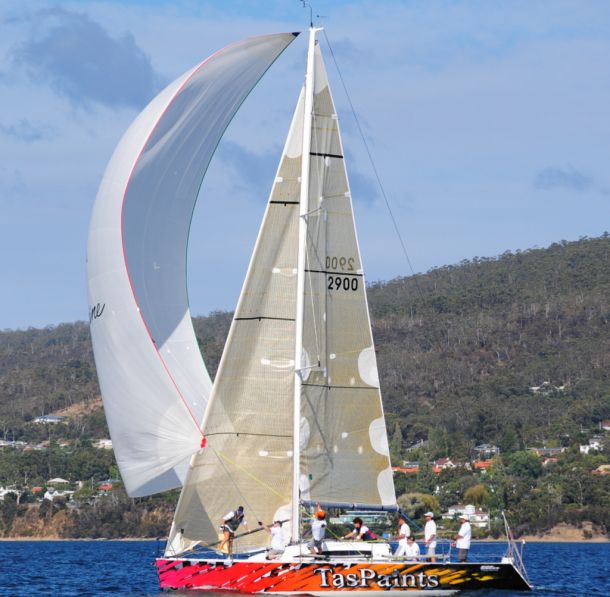 The first three racing yachts to enter next month’s Banjos Shoreline Crown Series Bellerive Regatta, Tas Paints, Madness and Host Plus Executive, are also lining up for the annual ‘world championship’ for the Mumm 36 class.

The so-called ‘world championship’ has been a tongue-in-cheek, but highly competitive clash at the regatta between Bellerive Yacht Club members Ian Stewart (Tas Paints) and Jeff Cordell (Host PlusExecutive), skippering their near identical Mumm 36 class yachts.

This year it will be a three-cornered contest with cross-river rival Madness from the Royal Yacht Club of Tasmania entering the fray under the guidance of co-owners Gavin Adamson and Janene Frawley.

This year’s regatta has been brought forward a week to the weekend of February 13-15, moving the event away from the Clarence Council Jazz Festival to avoid issues with the timing of post race entertainment on the shores of Kangaroo Bay.

The Banjos Shoreline Bellerive Regatta is unique in that it starts with a twilight race on the evening of Friday, January 13 for keelboats and continues through to the Saturday and Sunday with multiple races scheduled for all classes. The regatta is Tasmania biggest combined regatta of keelboats and off-the-beach classes and total entries could reach 200 boats. Nearly 100 keelboats and 85 off-the-beach dinghies and catamarans competed last year.

Hobart yachts which performed well in the recent Sydney to Hobart and Launceston to Hobart offshore races, including Whistler, Obsession, The Fork in the Road and The Protagonist are expected to contest the keelboat divisions.

Teenage River Derwent sailors who have again done well in national championships are expected to strongly support the regatta, including Laser 4.7 sailor Sam King who finished sixth in Australian Youth Championships in Perth, WA, and Sam Abel and Hugo Allison who finished a close second in the International Cadet Australian championships at Port Lincoln, SA.

Sam and Hugo headed the Sandy Bay Sailing Club team that won the prestigious Tillett Trophy for International Cadet teams and most members of that team are expected to contest the Banjos Shoreline Crown Series Bellerive Regatta.

Adding spectacle to the regatta will be the high-performance SB20 sports boats from Derwent Sailing Squadron and the hull-flying Paper Tiger catamarans from Lauderdale Yacht Club, always strong supporters of the Crown Series Bellerive Regatta.

From 100 competing yachts and dinghies in 2005 the regatta has doubled in size in just over a decade. This year will see yachts racing in six divisions while most off-the-beach classes sailed in southern Tasmania will be competing in one-design classes.