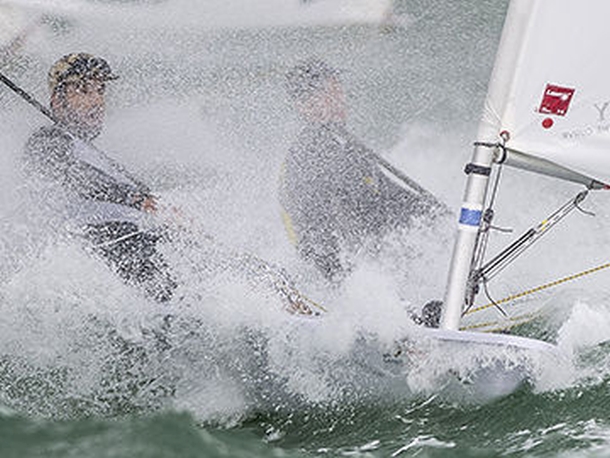 Numerous challenges were posed to the competitors in wet and windy day of action. Racing commenced shortly after 10:00 local time with a confirmed number of 856 sailors from 63 nations competing across the ten Olympic and three Paralympic events.

Robert Scheidt, winner of five medals in five Olympiads, two of them gold, described the series opener as, “Windy. Tough. What you have to do this early in the regatta is avoid the big problems.”

Which is not so easy when a squall is the takeaway.

“In the first race there was a time on the second weather leg where we couldn't see through the rain, couldn't find the marks,” Scheidt said. “Finally Bruno (Fontes) saw a bit of colour out there in the grey stuff, and we both went for it, and we made big gains.”

Figure the breeze at the moment was high 20s or perhaps even 30 knots, so a boat aimed the right direction – and on its feet – had a lot going for it. “After that,” Scheidt said “I didn't have a special second race, but I didn't need to. I was happy with a second and a fourth.” Those finishes left Scheidt second to Fontes, first, and New Zealand's Andy Maloney, second at 4-1 in the other division of the split fleet.

The other piece of Laser class news happened in the other division of the split fleet, where the Aussie, Tom Burton, who has been on a winning streak, dug himself a hole with finishes of 18th and 20th.

Perennial threats Luke Patience and crew Elliot Willis of the UK comfortably topped a fleet of 45 entries in the 470 class, on a challenging day, on scores of first and second.

As in other fleets, the people at or near the top of the leaderboard were grateful to be just that. Australian 470 skipper Mat Belcher figured, “The job was to get around the course. We were happy with a first and a fifth and a boat that was still working. We have the whole week to make points.” Perhaps it is fair to add, Belcher was busy gluing and screwing new parts onto his “still working” mast as he spoke.

And Belcher has earned whatever confidence he can muster. A five time world champion – all in a row – he and crew Will Ryan won the inaugural ISAF Sailing World Cup Final title in Abu Dhabi, UAE, in November.

Asenathi Jim and Roger Hudson of the Republic of South Africa stand second off a 4-6 day, followed by the French threat of Sofian Bouvet and Jeremie Mion, 3-8. They're the defending champions. At this regatta one year ago, Bouvet and Mion broke a seventeen-regatta winning streak that Belcher and Ryan had been riding.

Stories stories, everybody had a story. The Japanese duo of Tetsuya Matsunaga (a second generation sailor) and Yugo Yoshida used both sides of the course, “sometimes” to good effect, said Matsunaga, “It was very shifty. It the second race, we went left and the wind came from the right. We rounded the top mark 20th or so. I really don't know.” But that “20th or so” turned into a 10th for a 2-10 day and fifth in the standings.

In the Women's 470 racing, London 2012 gold medalists Jo Aleh and Polly Powrie of New Zealand, “had just made it around the gybe mark” of race one, Aleh said, when THE SQUALL hit.

“We looked back and the blast was fairly flattening the fleet. You wanted to ask, where did everybody go? But we got the kite down, we stayed on our feet and we made some nice gains.”

The day wrapped up with Aleh and Powrie leading the standings off a pair of seconds.

“The team of the moment,” in the words of a close series observer, fared less well. That would be Austria's Lara Vadlau and crew Jolanta Ogar The 2014 World and World Cup champions presently stand ninth off finishes of 15th and 16th – remarkably consistent, but.

Again, stories and stories. Americans Anna Haeger and Briana Provancha were gybing at the mark when squall's blast arrived. It did not go well. Haeger and Provancha had an 11-10 day and some body pain to take home.

Louis Giard (FRA), conqueror of the inaugural ISAF Sailing World Cup Final title, resumed in Miami from where he left off in Abu Dhabi – leading the way.

Although he sits pretty on two points at the top, he discards an 11th, which could prove deadly to his points total if he finishes lower than that as the week pans out. A scoreline of 3-1-2 is more of a solid foundation to build upon and second placed Byron Kokkalanis (GRE) is the proud owner of that run.

“All the races were good with lots of shifts and a lot of ups and downs,” commented Kokkalanis. “I managed to do well by finishing third, first and second. I had to catch up in the first and third race but the second race was really good. I had a good start and was fighting hard with Nick Dempsey, it was really fun and a good day.”

Solid foundations are key for a week long RS:X competition. Races are short, frequent, intense and compelling. Thirteen more are scheduled for the week with gold fleet racing commencing on Wednesday and Kokkalanis knows he has to be in top shape to defend his title, “Tomorrow I will take the same approach and try to do my best as always. That's what everybody is trying to do.

“I'll try to stay on top and then the real racing, gold fleet, starts on Wednesday. All the good guys will be together so until then I'll try and get as few points as possible.”

Tom Squires (GBR) laid an equally impressive foundation, a 1-3-3, rounding off the top three after day one.

In a field that features Olympic medallists, World Champions and an ISAF Rolex World Sailor of the Year, home nation sailor Marion Lepert had a dream start.

From two races Lepert notched up a fourth and a bullet to top the pack of 37. She holds off Flavia Tartaglini (ITA) and Olga Maslivets (RUS), who are second and third respectively.

A recent graduate from youth competition, Lepert made in-roads in the Techno 293 where she claimed a silver medal at the 2011 World Championship. She moved up to the RS:X and a fourth at the 2013 Sail First ISAF Youth Worlds confirmed her promise. Albeit a dream start, Lepert will have her work cut out to maintain such a performance it in amongst a field of seasoned professionals.

Taming the Nacra 17 beast came as a challenge to many of the 49-boat Mixed Multihull fleet. With gusts hitting the 30 knot mark, thrills and spills were inevitable and that was certainly the case with as many as 26 boats either unable to finish the second race or deciding enough was enough in advance of the start.

A night of boat work and maintenance will be in order for several of the competitors whilst leaders Gemma Jones and Jason Saunders (NZL), Vittorio Bissaro and Silvia Sicouri (ITA) and Billy Besson and Marie Riou (FRA) will all rest easy after a job well done from three races.

Like the Nacra 17 sailors, the Women's Skiff competitors on the 49erFX also found the Miami breeze extremely tough to handle.

Of the 40 teams, just eight of them successfully worked their way around the course to complete the single race of the day.

Alex Maloney and Molly Meech (NZL) are two of the most experienced 49erFX competitors around, with well over two years of boat experience behind them. With a range of knowledge behind them they comprehensively claimed the day's race win by more than a minute.

Spain's Diego Botin and Iago Lopez got off to a flying start in the 49er, controlling the proceedings in the blue fleet. Right from the off they put in a composed performance in a competitive pack to take the opening race bullet.

They remained at the front for the next bout, coming through in second behind John Pink and Stuart Bithell (GBR) before they rounded off a superb day by taking the final race victory

Being at the top of the 49er leader board, after the opening day, is not uncommon ground for Botin. The young Spaniard had an outstanding start at the 2014 editions of World Cup Mallorca and Hyères. However, he was unable to convert that into consistent results over a gruelling six day ISAF Sailing World Cup regatta.

For now, Botin and Lopez lead, but with five days and 13 races remaining, time will tell if Botin can continue his form.

Results were mixed in the yellow fleet with no team taking the bull by the horns. Federico and Arturo Alonso (ESP) sit second after they recorded a discarded 20th and a second and a third. David Gilmour and Rhys Mara (AUS) occupy the final podium sport at the early stages.

Hand it to hardy Briton Giles Scott, who has taken over the throne of the longest-serving dinghy class in Olympic sailing. The Finn has been raced in 16 Olympiads. It is known as the boat in which Paul Elvstrom redefined the racing sailor as an athlete. And it is known as the boat that tests athletes as no other.

Scott has not lost in 15 months, and he didn't do it through cherry-picking the easy stuff. He won seven ranked regattas in that time, and on Monday Scott won both races. His countryman, Ed Wright, has often come closest to unseating him, but following the opening day of racing here Wright stands fourth on scores of 3-7.

It was a double bullet day for John Robertson, Hannah Stodel and Steve Thomas (GBR) the Sonar. They dominant Brits top the leader board and are followed by Paul Tingley, Logan Campbell and Scott Lutes (CAN) who saw the back of the British boat on two occasions with a pair of seconds.

John McRoberts and Jackie Gay (CAN) started well in the SKUD18 with a second and a first. They lead on three points with Alexandra Rickham and Niki Birrell (GBR) second on five points.