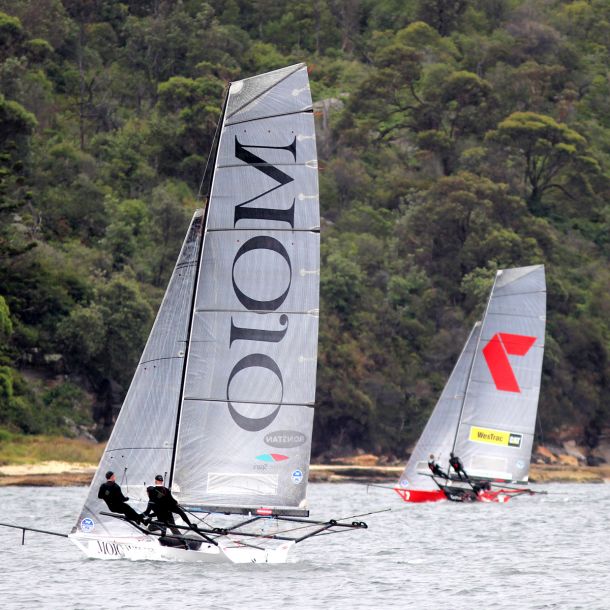 Mojo Wine and Gotta Love It 7 challengers for the championship. Photo 18 Footers League.

The fourth different winner from four races sailed to date has the NSW 18ft Skiff Championship wide open going into next Sunday’s last race of the series on Sydney Harbour. The defending champion Gotta Love It 7 team came back strongly today to score an impressive 2m55s win after a starting line incident forced the skiff out of yesterday’s race. After all teams discard their worst performance to date, only three points separates the leading five teams.

Coopers 62-Rag & Famish Hotel (Jack Macartney) leads the pack on seven points, followed by Mojo Wine (Lee Knapton) and Thurlow Fisher Lawyers (Michael Coxon) on eight, Gotta Love It 7 on nine points and Asko Appliances on ten. The position could become even more complicated as Gotta Love It 7 has a protest hearing pending which could improve the teams score if average points is awarded by the protest committee.

Gotta Love It 7 (Seve Jarvin, Sam Newton, Scott Babbage) took the lead soon after the start and led by 25s at the first windward mark on the three lap windward-return course.  Asko Appliances (Marcus Ashley-Jones, James Dorron, Jeronimo Harrison) continued their form improvement to hold second place behind 7, and maintained this throughout the race.

Lumix (Brett Van Munster, Aron Everett, Daniel Nixon) trailed at the first windward mark but a strong spinnaker leg back to the bottom mark on the first lap saw the team start to put the pressure on Asko Appliances. On the final lap of the course, the pair were within a few secsonds of each other but Asko held strong and finished 10s.ahead of Lumix. Yandoo (John Winning) also impressed with a fifth place after capsizing following an incident with Pure Blonde (Nick Daly). After scoring a big win in yesterday’s race, Thurlow Fisher Lawyers was forced out only moments after the start when the skiff suffered jib failure.

Race 5 (the last race) of the NSW Championship will be sailed next Sunday.  The club’s regular ferry will follow the race, leaving Double Bay Wharf at 2.15pm. With such a close finish looming next Sunday, the Australian 18 Footers League’s spectator ferry is sure to again be at maximum capacity.