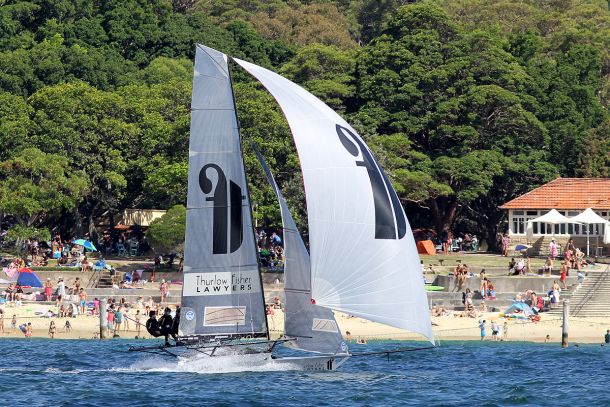 The Thurlow Fisher Lawyers team became the third different winner from the three races sailed so far in the NSW 18ft Skiff Championship on Sydney Harbour. Michael Coxon, Dave O’Connor and Trent Barnabas handled the light, variable north-east to perfection as they raced away from the rest of the fleet for a 3m29s victory

The trio of race winners (Mojo Wine, Coopers 62-Rag & Famish Hotel and Thurlow Fisher Lawyers) has them all level with a total of eight points each.

Defending champion and pre-series favourite Gotta Love It 7 (Seve Jarvin) is having an unfortunate series to date but is hopeful a favourable protest hearing decision following today’s race will bring the team back into contention.

The light wind, which varied several times in direction and strength, provided spectators with an interesting spectacle as all teams had their own theories about the best course to sail – both on and off the breeze.

On the spinnaker run back from the Beashel Buoy to the wing mark off the southern end of Shark Island, the leading six teams had vastly different ideas as they selected a variety of angles into the Rose Bay.

‘The Rag’ held her lead at the wing mark but Thurlow Fisher Lawyers was looking in good touch as she edged ahead of De’Longhi. At the bottom mark, the wind was extremely light as the fleet bunched and Thurlow Fisher Lawyers grabbed a 15s lead over Coopers 62-Rag & Famish Hotel. The following seven boats were close behind headed by De’Longhi, Asko Appliances, Mojo Wine and Yandoo.

Thurlow Fisher Lawyers dramatically increased her lead on the next windward beat then raced right away to establish a 1m55s break at the bottom mark on the second lap. While the race for the lead was basically all over the battle for the next six placings was certainly up for grabs as positions changed regularly.

Following an incident at the start of the race, Gotta Love It 7’s crew entered a protest requesting average points as the skiff was forced to retire with a broken outer wing tube which supports the pole wires.

Race 4 of the championship is due to be sailed tomorrow (Monday, 26 January) so the fate of Team Seven won’t be known until just before the last race of the series next Sunday.

Race 5 (the last race) of the NSW Championship will be sailed next Sunday.  The club’s regular ferry will follow the race, leaving Double Bay Wharf at 2.15pm.