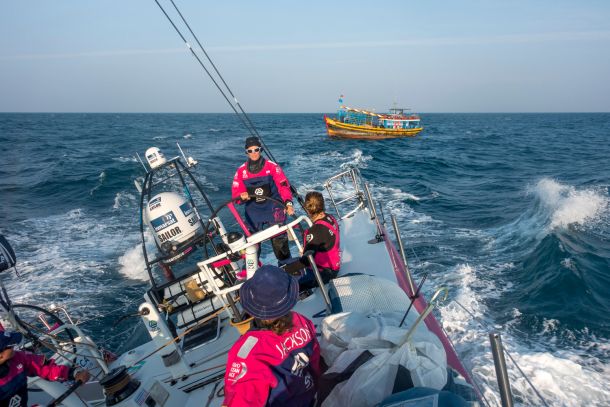 SANYA, China, January 25 – A thrilling finish looks to be in store for Leg 3 of the Volvo Ocean Race after the chasing pack made big inroads into Dongfeng Race Team’s once huge lead early on Sunday with just over 24 hours to sail to the finish in Sanya.

Charles Caudrelier’s (FRA) crew led by more than 106 nautical miles (nm) approaching the Malacca Strait but gradually their advantage has been clawed back with under 350nm left of this fascinating stage from Abu Dhabi to Sanya on the southernmost tip of China.

Understandably, the French skipper and his team have been feeling the pressure as the chasing pack led by Abu Dhabi Ocean Racing (Ian Walker/GBR) threatened their hopes of becoming the first Chinese-backed team to win a leg in offshore sailing’s most prestigious round-the-world race.

Victory in the 4,670nm stage, which started on January 3 in Abu Dhabi, would also put Dongfeng Race Team top of the overall standings on five points ahead of Abu Dhabi Ocean Racing and Team Brunel who won Legs 1 and 2 respectively.

“Onboard Dongfeng we must stay concentrated … the finish line is still a long way away,” Caudrelier had warned in a blog from the boat as the fleet headed towards the Vietnamese coast before the weekend.

At 1240 UTC on Sunday, they had a lead of 34nm over Leg 1 winners Abu Dhabi Ocean Racing with Team Alvimedica (Charles Enright/USA), MAPFRE (Xabi Fernández/ESP) and Team Brunel (Bouwe Bekking/NED) hot on their heels too within 50nm of the Dongfeng boat.

Team SCA (Sam Davies/GBR) have been making good gains too, lying 69.2nm behind the leaders.

All the fleet had been slaloming back and forth with gybe after gybe to avoid the numerous obstacles, including a series of near misses with fishing vessels and their nets just off the Vietnamese coast.

Walker described that process during Saturday night as “possibly the single hardest night of the race” while Enright went further: “It was the most intense night of sailing of my entire life.”

The sailors are heading for an amazing welcome in Sanya. The Race Village opened on Saturday to large crowds and is sure to repeat last edition’s (2011-12) fantastic receptions for the fleet no matter what time of day or night they arrive.