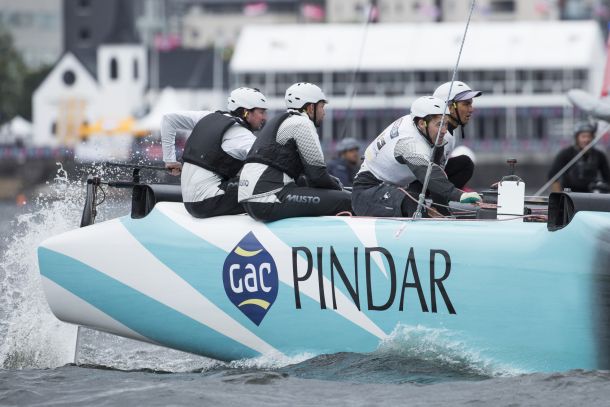 The world’s elite sailors are preparing to meet in Singapore for the opening Act of the 2015 Extreme Sailing Series™, which is set to bring the world famous Marina Bay alive with its pioneering Stadium Racing concept. With the transfer window now closed, some new players will enter the arena as the Series launches into its ninth season, with the continued support of Series Main Partner Land Rover. Race Director Phil Lawrence expects the venue to deliver on every level – and an unpredictable start to the season: “Downtown Singapore is always a terrific showcase for Extreme 40 stadium racing and as an opener for the 2015 Series will set the bar high. This will be a baptism of fire for the new teams, whilst those more familiar with the circuit will face challenging racing in light and tricky winds especially if hit by gusts delivered by the frequent local thunderstorms. With such a talented and diverse fleet on the grid this Series we can expect to see some spectacular thrills and spills that the Extreme Sailing Series is famous for.”

Nine teams with 45 world-class sailors from 10 nations will lock horns from the 5 to the 8 of February, under the gaze of the towering downtown city skyline with the support of Host Venue Partner Aberdeen Asset Management. With just one week to go, here’s a lowdown on the teams and their line-ups.

Lorenzo Bressani – Lino Sonego Team Italia
“As our first race in the Series, Singapore will be a very important test for us and an opportunity to setup crew dynamics on a new boat. The objectives of the team for the season are to mature in our experience in this class and to grow up Act by Act. As Lino Sonego Team Italia we have planned a three years program and Singapore is just the start of a long route.”

Sarah Ayton – The Wave, Muscat
“The Extreme Sailing Series, I believe, is one of best sailing Series around at the moment; four days of racing, up to 11 races a day, plenty of action and loads going on. Stadium racing, it doesn’t really get much better.”

Rasmus Køstner – SAP Extreme Sailing Team
“We don’t take this challenge lightly; we are expecting 2015 to be quite a different year and we need to be ready off the starting block. Year on year we can see that the Series innovates on every level. It’s heart-racing action, which demands on the edge split second decision-making. We’ll take nothing for granted this year. In this kind of sailing you cannot hide, and need to fight for every metre – everybody can win a race, but to get to the top of the leaderboard at the end of the year, you have to perform well in several hundred races. No other racing delivers like this.”

Nick Moloney – Team Aberdeen
“Singapore has become an event all the teams look forward to as it is such a tight, challenging course. Plus this year, as the season opener, everyone is excited to be back on the water. Because of team changes, there is a degree of uncertainty too, which adds to the anticipation.”

Stevie Morrison – Oman Air
“I am very excited ahead of the first event, I think the opportunity to start something new and with a totally clear slate is going to be unreal. I have no doubt that a tight venue like we have in Singapore will be a baptism of fire, but as long as we keep our heads out of the boat and on the wind and our opposition then we can avoid major incident and learn a lot of lessons.”

Roman Hagara – Red Bull Sailing Team
“We welcome new crew members on board Red Bull Sailing in 2015. This change will give us the right push to perform better in 2015 and fight for the Series title. Singapore is a beautiful but tricky sailing location. One mistake and you are at the end of the fleet. One right maneuver and you win a race. Our goal is to finish the first Act within the top three.”

Phil Robertson – Gazprom Team Russia
“Gazprom Team Russia is going to sail with three Russians on board. The idea of the Gazprom programme right from day one has been to develop young national sailors so this is an exciting move for the team.”