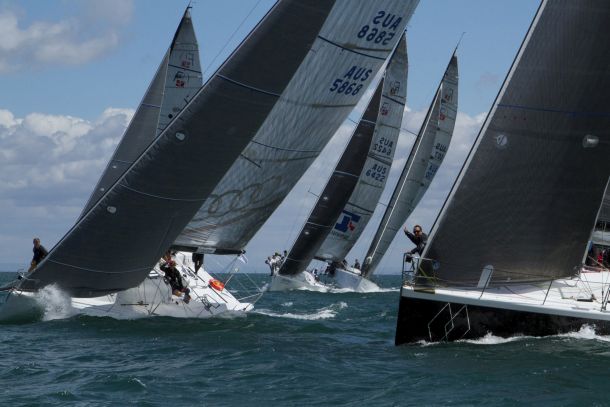 Four races and three different winners on the opening day of the Aberdeen Asset Management Farr 40 Victorian State Title make the proposition of predicting any sort of finish order for the three-day Port Phillip series a risky one.

Gordon Ketelbey threw the first dart with Zen (Middle Harbour Yacht Club) then Guido Belgiorno-Nettis and the Transfusion team from MHYC hit the target. The third win belonged to Rod Jones’ Kindergarten (MYC/MHYC) and finally Belgiorno-Nettis and tactician Katie Pellew-Spithill nabbed a second bullet to lead Kindergarten by two points on the progressive scoresheet at the close of racing.

“Today’s results are reflective of the quality of the sailors here. Sometimes you just take your turn,” Jones said this afternoon back at the host Sandringham Yacht Club in Melbourne.

“Race one was tricky with a big shift on the downwind. Once it came from 180dg it stabilised and was more predictable at a consistent strength. Things got a big bumpy in the last race,” Jones added. On the crew morale at the second one design event of Kindergarten’s maiden season he commented, “The core team are all committed to the same thing and we are enjoying each other’s company.”

Jones grew up in Melbourne and in fact lived up the road from SYC until the mid-80s, sailing Stars and Finns plus his father’s half and three-quarter tonner yachts. Port Phillip is a comfortable playground for the now Queensland based skipper and when the sea state stirred up later in the day due to wind against current, cumulative experience and recollections of how best to handle the conditions came in handy.

Champion women’s match racer Katie Pellew-Spithill from Sydney is wearing the Transfusion tactician’s badge for the first time in a Farr 40 event, moving from amidships on the 40-footer to the more pressured rear guard and standing right by the driver.

“Day one you go in open minded,” she said post racing. “We had four strong races, though we were a little slow off the start line in a couple – that’s the homework. It was enjoyable and challenging and based on today Voodoo and Kindergarten look like the main competition.”

Tonight the Transfusion team are off for a hearty pub steak, to put some extra iron in the blood and maybe some liquid B12 as well, in recognition of their solid start to the season’s first pointscore regatta.

Principal Race Officer Sulis Papantoniou described the series’ opener as “Fantastic! A light first race with the breeze out of the sou’east then it turned right and climbed to 18-19 knots by race four. It was sunny and the racing was tight. I expect something similar tomorrow; we’ll go for another four races leaving two left for an easy finish on Sunday.”