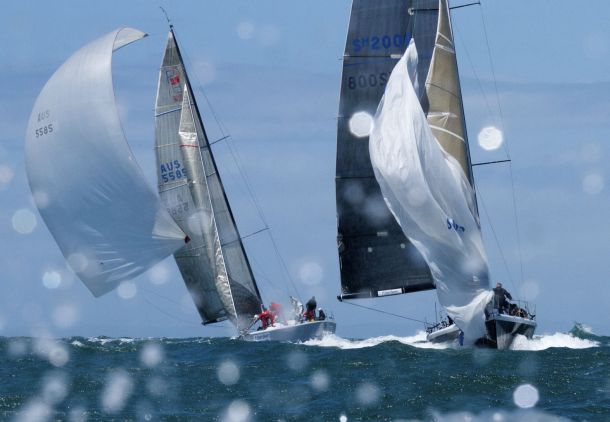 Reigning Australian Farr 40 champion Transfusion was able to extend their lead on the second day of the Aberdeen Asset Management Farr 40 Victorian State Title on Port Phillip, but at the close of a riveting three race battle, Guido Belgiorno-Nettis has a new threat in Voodoo Chile.

Day two of class President Andrew Hunn’s state title campaign with Voodoo Chile, named after the Jimi Hendrix song, earned the mostly Tasmanian crew the best scores among the fleet; two bullets and a second to be four points off the top dog from Sydney.

“It was a great day; lots of pressure tight racing between us and Transfusion…it was nip and tuck, gybe and tack the whole way,” said Hunn, the elated skipper adding, “It doesn’t get any better. In one finish it came down to who gybed the best and rolled over the line first, in 20 plus knots of breeze!”

Local skipper of Double Black Rob Pitts explains the choppy sea-state that reliably tests sailors competing off Sandringham Yacht Club on the eastern side of Port Phillip, “The southerly wind runs all the way down the bay. It travels around 35 miles and by the time it gets to this part of the bay the swell really builds and the waves are close together. This makes conditions pretty tricky.”

“It’s certainly bumpy,” agrees Hunn. “Sometimes it’s great and sometimes chaotic.” In a practical sense a short sharp chop makes it tough for crew to keep their balance, let alone pulling off manoeuvres in fresh breezes. Hunn praised his crew, including Darren Jones and tactician Mark Bradford, saying “The guys did a great job today.” And he’s not forgetting the other contenders, “Kindergarten is doing extremely well; they are still fully in the mix. It’s all to play for tomorrow.”

Pitts said his crew had to keep their wits in today’s low 20kt average winds, gusting up to 25 from a SSW direction and combining with a big sea-state. “It’s as intense as I was expecting. If you make an error you get punished, that’s the reality of one design. For us it’s about time on the boat and boat handling, the lead guys have got that down pat.

“We are really enjoying our battle with the other Melbourne boat, Local Mocean, and being in the mix at the starts with the other guys is awesome. This afternoon we are catching up with the rest of the crews, I think I’ve already been talked into doing the nationals in March,” Pitts conceded.

Managing director of Aberdeen Asset Management Brett Jollie hosted 50 guests today, commenting, “It’s such an exciting sport both for competitors and spectators. In fairly rough conditions Transfusion and Voodoo Chile both showed their skills in an amazing display. Aberdeen is delighted to be back for the third year supporting a fantastic series, and it’s great to see new boats Kindergarten and Double Black racing with the fleet.”

“It’s a long way to come to sit in a bar playing with epoxy,” is how mainsheet hand Shane Guanaria summed up a day that began badly when the tiller on Gordon Ketelbey’s Zen’s parted ways with the rudder on the first downwind run. “That was pretty much it, a simple breakage but terminal for us. The boat rounded up in a hurry, luckily there was no damage to the sails. We pulled the gear down and motored slowly home, the crew standing on the top of the tiller to hold it on to the rudder.”

Then the hard work began. For the repair job Zen’s crew opted to split up, some going to Hart Marine at Mornington where luckily someone on the boat knew someone else skilled enough to weld up the tiller. Back at SYC others were gluing the rudder post back together.

“We’ll be back out tomorrow,” Guanaria promises. “The biggest disappointment was we’d learnt so much from day one and we looking forward to capitalising and taking another step up today. The guys on Voodoo were very quick to offer us their spare tiller when they heard what had happened but due to structural damage we couldn’t have made the last race of the day anyway.”

Rather than going for a fourth race in the heavy sea-state PRO Sulis Papantoniou decided to bring crews in early for the planned dockside gathering and BBQ on a stunning Melbourne evening, a great opportunity for the two class newcomers to meet the rest of the Farr 40 owners and sailors.