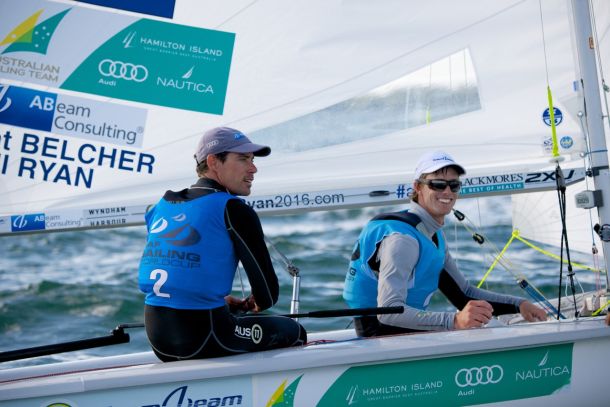 No wind on the penultimate date of racing for the Olympic classes made for several race cancellations and shortened race schedule.  With no racing in the Men’s 470 and 49er skiff the overnight results stand and the leader board top ten advanced straight through to Saturday's (Sunday AEDT) medal race. Consequently Men’s 470 World Champions Mat Belcher (QLD) and Will Ryan (QLD) as well as the new 49er skiff pairing of Joel Turner (QLD) and Iain Jensen (NSW) will go into tomorrow’s final medal racing ranked second.

Olympic gold medallist Iain Jensen (NSW) sailing in Miami with up and coming skipper Joel Turner (QLD) only sit one point behind the leading Austrians and given they have only sailed together for a few days, any medal will be a great success for this combination after an exciting performance in Miami this week.

There will be more at stake for Belcher and Ryan in the medal race, after the last opportunity to gain valuable points was cancelled today. Going into the final day Belcher and Ryan sit 15 points behind the leading British crew of Luke Patience and Elliot Willis. Looking behind them, the pair has a 13-point lead over third and 15-point over fourth but there is still potential for the results to go either way in the double points medal race so Belcher and Ryan will have to be on their game.

“It’s unfortunate we didn’t get to race the last two races, which unfortunately didn’t give us the opportunity to catch up on any points and try to close the points gap. But that’s sailing. It’s a bit of a points gap in front and behind so we’ll see what we can manage but we are looking forward to finishing strong tomorrow”, Mat Belcher said.

Laser sailor Matt Wearn (WA) will go into the final race day in third and Finn sailor Jake Lilley (QLD) will fight to get back on the podium after finishing fourth on the penultimate race day. Oliver Tweddell (VIC) in the Finn and women’s 49erFX skiff crew of Tess Lloyd (VIC) and Caitlin Elks (WA) complete Australian Sailing’s medal race contingent of a total of six boats.

Current Laser World #1 Tom Burton (NSW), who had slowly been moving up the ranks after a virus had weakened him considerably at the start of the event, finished racing ranked 18th.

“All the small things have added up. I’m still pleased with some of my results, especially considering with how bad I was feeling just a week ago,” he said.

“It's another kick up the butt like in Qingdao. You just can't race the laser on 50%. I'll have some time now to prepare for Palma and come back hard. It's good to see where I stand at the moment even if it's not ideal and move forward to the next block of regattas.“

The Paralympic events came to a light wind conclusion in Miami with no racing possible on the last day.   Results from overnight stand with the medals confirmed and Daniel Fitzgibbon and Liesl Tesch made it two ISAF Sailing World Cup SKUD18 victories in a row in Miami. The pair won the Melbourne edition in December and facing new foes, they claimed another scalp.

Fitzgibbon and Tesch put in a strong performance in Miami after the week had started out with a bit of bad luck for the pair when they missed a race due to technical issues with Fitzgibbon’s seat set-up. But already on day two they took the lead and never handed it back winning with a four-point advantage over their closest rivals Alexandra Rickham and Niki Birrell from Great Britain.

“The start of our week was a bit up and down. We started with a bullet and then suffered some gear failure with my canting seat” Fitzgibbon explained. “The next two days followed this trend with a good and not so good race, but we got in a couple race wins over the last couple of days. For the upcoming events we will be aiming for a bit more consistency but it’s great to take home another win.”

Tasmanian Matt Bugg finished the event off with a race win yesterday and an overall fifth place in the 2.4mR.

Racing is scheduled to resume Saturday local time from 11:00 a.m. (3 a.m. Sunday AEDT) as the Medal Races bring the regatta to a close.

The racing aree available to watch in 2D and 3D via the live tracking.