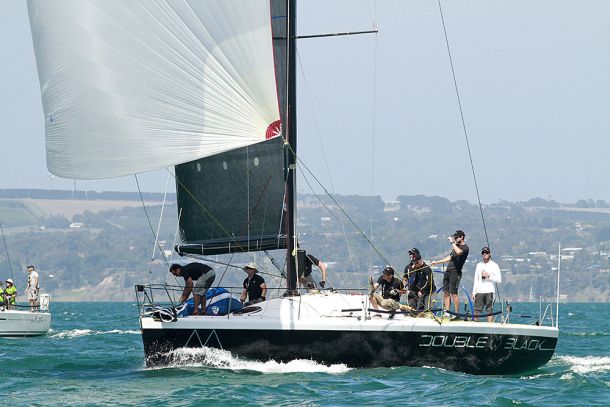 He and his crew, including tactician Jake Newman fresh from a win at the Etchells Australian Championship with skipper John Bertrand OAM, ran the full check list on Double Black during last weekend’s Festival of Sails, their first major regatta with the boat. The Geelong series threw up a range of conditions, including a heavy air day with breezes well over 30 knots that pushed Pitts’ SYC based 40-footer up to 17.5 knots.

“The Geelong regatta has been great for our confidence,” Pitts reflected after Monday’s final race, adding that boat handling was their biggest takeaway. “We pushed ourselves pretty hard in the conditions with no breakages. Mixing it up with the bigger boats was really good for us and Jake being an Etchells sailor meant he really knew where to put the boat.”

Pitts says he was “wrapped” with their fourth overall in Rating Series division 1 behind Shogun V, Nine Dragons and OneSails Racing.

Noel ‘Nitro’ Drennan, mainsheet trimmer on the eventual division 1 winner Shogun V, is jumping across to work beside Newman this weekend. He’s expecting steadier breeze on the opposite side of the bay, “It will be a good regatta; the Double Black guys will see how well the interstate boats are prepared and get an idea of the standard they are up against.”

Pitts is a Melbourne based builder who bought the former Bribie Star 14 months ago with a longer term ambition; the likelihood of the Rolex Farr 40 World Championship returning to Sydney in 2016.

“This weekend will be our first time racing with the rest of the Farr 40 fleet. The Transfusion boys have been in Sandy for the past couple of weeks; they’ve come on the boat a couple of times and given us plenty of ideas. I didn’t know what to expect joining the class, it’s such a good class with great people, and the top guys genuinely want to see the fleet lift. For us this weekend is about benchmarking and seeing what we have to do to step up,” Pitts added.

Travelling from Sydney is Transfusion (Guido Belgiorno-Nettis) with Katie Spithill as tactician, Edake (Jeff Carter) with Evan Walker as tactician heading south for their first foray on the bay, Kindergarten (Rod Jones) with its mixed Sydney and Queensland crew including tactician Bucky Smith, an Etchells world champion, and Zen (Gordon Ketelbey) with Sean Kirkjian calling the shots.

Class President Andrew Hunn and co-owner Lloyd Clark take turns helming their Tasmanian based Voodoo Chile. For the boat’s first regatta of the season, Hunn, a prominent Hobart neurosurgeon, is teaming up with tactician Mark Bradford. Voodoo Chile won the Corinthian trophy three years in a row and has moved up to the professional division in 2014-2015, which allows for more professional crew.

Class sponsor Aberdeen Asset Management will entertain guests on Saturday on a hospitality vessel, Rob Brown providing the expert commentary, then join the Farr 40 crews for the traditional dock party and BBQ that evening.

Racing is scheduled to start daily at 11am in the vicinity of SYC under Principal Race Officer Sulis Papantoniou’s direction. SYC cleverly built a huge outdoor deck on the upper level of the clubhouse that is the perfect viewing platform, and in bad weather the full glass front upstairs still allows spectators a clear view.