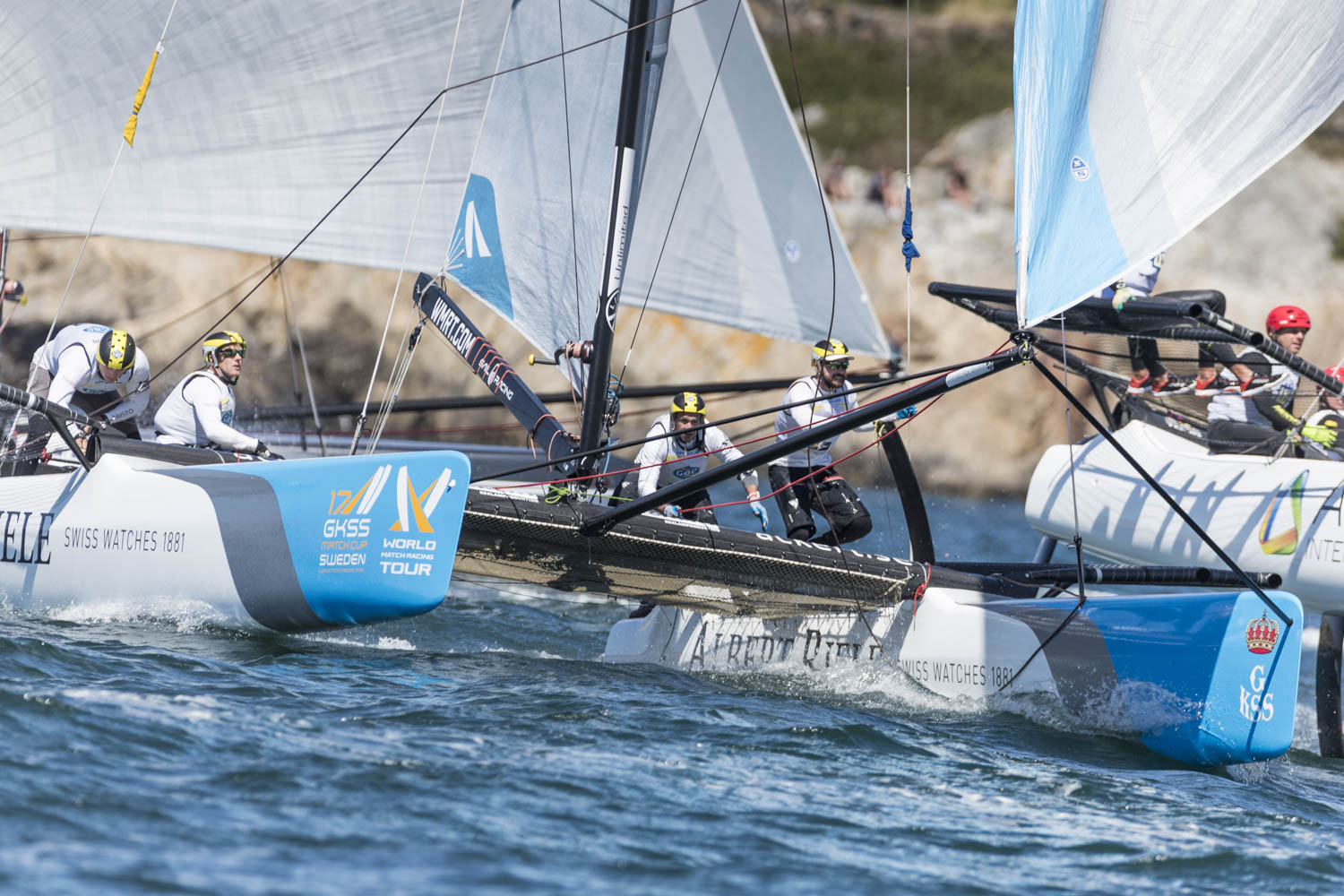 “It was a pleasing start for Team GAC Pindar,” said Williams. “With the racing out there, when you are at the front you have to take advantage and when you’re at the back you have to battle your way through and find the passing lanes. We managed to do that.”

Elsewhere competition was much closer.

In their group Australian Matt Jerwood came out on top, but tied on points with two time Tour champion Taylor Canfield from the US Virgin Islands. Jerwood enjoyed three race wins, but consistency failed them: “The middle race was a shocker but we managed to sort it out and got two bullets after that. We didn’t think we’d topped the group, but then found out we had.”

While Perth-based teams like Jerwood’s and those of the Gilmours and Torvar Mirsky were able to practice last year on the local fleet of high performance M32 catamarans, this year Jerwood said they have been racing smaller boats to stay sharp. He is very much enjoying being back on Marstrand Arena after finishing third on his first visit here last year. “There is nowhere better to match race than the fjord. It is absolutely perfect, world class.”

The tightest group was the last to race and ended up topped by three antipodean teams – Phil Robertson, Chris Steele and Torvar Mirsky – all tied on points.

Like Steele, Pieter-Jan Postma scored two bullets in this group, but inconsistency caused him to finish fourth. “Overall it was good, we had good speed and tactics and good starts, but there is lot more we can do to improve – we stopped for a red flag which wasn’t ours, for example,” said the Dutch former Olympic Finn sailor. “But the guys worked hard – we had good starts and good strategy. Boat to boat quick manoeuvring is something we need to work on.”

Phil Robertson and his CHINAone NINGBO crew got off to a slow start but ended on a 2-2-1, results more befitting the winning team from here last year. “We struggled a bit to start off, to get the mode-ing right on these boats and we weren’t nailing our starts,” the New Zealand skipper and present World Match Racing Tour leader explained.

The day’s drama also occurred in this group, when Måns Holmberg capsized soon after the beginning of race three. As the young Swede explained: “We had a pretty good start in the first row with three other boats and Chris Steele just to windward of us. We thought we had room with an overlap to leeward but he put his bow down and we had to avoid. We hit the mark and put it on the daggerboard and we had to gybe and fly the hull to get it off. We were a bit too eager to get it flying and to get the buoy off and the gennaker didn’t come off for some reason. And then we flipped…”

Fortunately their M32 catamaran was rapidly righted and Holmberg and his crew were back in the saddle in time for the next race.

Tomorrow and Thursday will be the first-to-three Super 16 elimination round, while the three bottom-ranked teams from Qualifying will race to decide the 16th team to go through: Harry Price will face Eric Monnin, the victor then lining up against Evan Walker.